The city of Agra is world famous for the Taj Mahal, built by the Mughal emperor Shahjahan in memory of his beloved wife. However, it is also famous for the Agra Fort, which is a veritable treasure trove of the Mughal architectural tradition. The various buildings within this sprawling fort complex represent the assimilation of different cultures, which was the mark of the Mughal period. Jahangiri Mahal (Jahangir's Palace),

Akbar was the third Mughal emperor and undoubtedly the greatest. He was crowned the Mughal ruler in 1556 at the tender age of 14, when his father Humayun died suddenly. After Akbar consolidated his rule, he began constructing the Agra Fort, which coincided with the building of Humayun's tomb in Delhi. Akbar began the construction of this massive fort made of red sandstone on the banks of the Yamuna in 1565. The fort was ready by 1571, though additions were made up until the rule of Shahjahan, who was Akbar's grandson. During the time of Akbar, the fort mainly served military purpose, while by the time of Shahjahan it also served as a palace and court.

The fort's colossal double walls rise 20 m in height and measure 2.5 km in circumference. The fort is surrounded by a moat. The lofty battlements of the Agra fort cast its protective shadow over the far stretching mansions of nobles and princes built along the riverfront. The magnificent towers, bastions and ramparts and majestic gateways symbolized the confidence and power of the third Mughal emperor. The fort contains splendid palaces both in red sandstone and white marble built by two generations of prolific builders, Akbar and later on by Jahangir and Shahjahan. Of the nearly 500 Akbari buildings built in the Bengal and Gujarati traditions, only a few have survived, arrayed in a band on the riverfront.

Monuments within the fort

It was the principal zenana palace (palace for women belonging to the royal household), used mainly by the Rajput wives of Akbar. A splendid gateway leads to an interior courtyard surrounded by grand halls covered with profuse carvings on stone, heavily fashioned brackets, piers, and crossbeams. Jahangiri Mahal is the most important building of the Akbari period in the Agra Fort.

In the Khas Mahal enclosure (built by Shahjahan), later Mughal architecture comes of age. The Khas Mahal is an airy edifice, overlooking the specially laid Angoori Bagh (grape garden; a simple formal Mughal garden). Windows closed with jali (intricately perforated decorative stone screens) present fabulous view of the riverfront. The two copper-roofed pavilions built in the Bengali traditions were meant for prominent ladies of the harem. On three sides of this garden are residential quarters of women. Sheesh Mahal (mirror palace) or the royal hammam (bath) is decorated with myriad glass pieces and a central fountain.

was built by Shahjahan in 1636-37. It is a small hall with double marble columns inlaid with pietra dura decoration. Here the Mughal emperor received important dignitaries or foreign ambassadors. On the terrace, in front of this hall, are two marble thrones. The black throne belongs to Jahangir who, as Prince Salim in rebellion against Akbar at Allahabad, had ordered it for himself. Below this terrace lies the grand courtyard of Machchi Bhawan, meant for harem functions. On another side stands a small mosque built for Shahjahan by Aurangzeb.

The arches are covered with white lime polished to a smooth finish. The triple arched royal canopy has lavish pietra dura ornamentation. Here was kept the famous Peacock Throne ordered by Shahjahan. He met officials and commoners and listened to the petitioners in the Diwan-I-Aam. Further north stands the Moti Masjid (pearl mosque), its three domes in white marble raising their heads over the red sandstone wall. Moti Masjid is known for its sheer grandeur and perfect proportions. 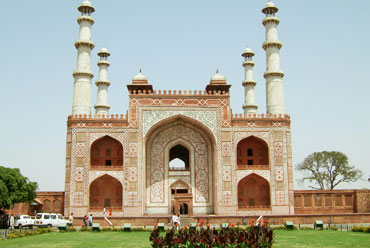 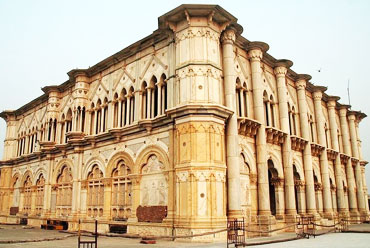