Owing to the diversity in flora, fauna, cuisines, languages, cultures and so many more things; Nagaland is one of the most visited places in India. Over the past few years, Nagaland Tourism has worked a lot in order to make visiting here blissful for people.

Nagaland is situated on the easternmost region of India. One of the seven sister states India, Nagaland is covered mostly by high-altitude mountains. The hospitability of the people here and their culture and tradition simply touch the heart. Moreover, the Nagaland is an ideal destination for trekking, rock climbing and jungle camping.

High mountains, deep gorges, green valleys, twisty streams and exotic flora and fauna found in Nagaland give an idea about the physical features of the place.

Nagas belong to the Mongoloid group who migrated to this hilly region hundreds of years ago. The ethnicity of the state comprises of 15 different tribes of Tibeto-Burmese origin who crossed the neighboring Myanmar (Burma) to reach this territory.

During the British rule in India, the Nagas were known for their extreme courage. During the end of the 19th century, the British, knowing the importance of the tribes here, had established a very good relationship with them. The Nagas later had proven to be the most useful help for the British in fighting and chasing away the Japanese who, during the war advanced up to the present-day capital of the state Kohima.

Sixteen years after India attained her independence, Nagaland was given the status of a full-fledged state on December 1, 1963.

During your Nagaland trip there are innumerable places to visit and things to do, but attending the fairs and becoming a part of the festivals is the best thing to do.

Nagaland is also the home of some of the most colorful festivals. Singing, dancing and drinking of locally prepared rice beer mark the Naga festivals. Sekrenyi is a festival that belongs to the Angami tribe. This festival signifies the end of the agricultural cycle and lasts for 10 days. Konyak Aoling is another festival that denotes the coming of the New Year. This festival is celebrated in the month of April. Moreover, there are the festivals like Ao Moatsu and the non-traditional tourism festival of May and October that draw good crowds.

The climate of Nagaland is comfortable all through the year. The temperature of the state ranges from 16°C to 31°C in summer (May to July) and 4°C to 24°C during winter season. The monsoon that spreads from the month of June to early September is marked by heavy rains.

How to Reach Nagaland

The only airport of the state is at Dimapur, which connects Nagaland with Guwahati and Calcutta by regular flights.

The major railhead is at Dimapur, which lies on the main line of the Northeastern Frontier Railway.

The Nagaland State Transport Corporation plies regular buses from Dimapur and Kohima to Guwahati, the gateway of northeast India and Shillong.

Kohima, the capital city of the state, has a number of sites that are worth visiting to get an insight of the place's rich history. The World War II Cemetery that lies in a beautiful surrounding, the Cathedral of Reconciliation with its striking red roof, the Bara Basti, the Nagaland Museum, Nagaland Zoo and Park are some of the attractions of Kohima.

The sites near Kohima include the tribal village of Khonoma, Dzulekie (famous for waterfalls), Jopfu Peak, Dzukou Valley, Dimapur, etc. 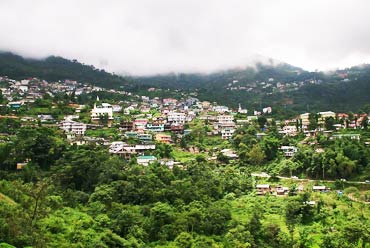