Located in Central India, Chhattisgarh has been carved out of Madhya Pradesh to become the 26th state of the Indian Union. It is endowed with huge mineral deposits and forest resources. Chattisgarh also has the largest concentration of Schedule Tribes in the country. Its cities, especially Raipur is full of migrants from other parts of the country.

Due to its location in central India, Chattisgarh is one of the few landlocked states of the country. Uttar Pradesh and Bihar bind the State in north, in the east it is bound by Orissa, in the south by Andhra Pradesh and in the West by Madhya Pradesh and Maharashtra.

A large part of the state comes under Vindhyachal range that divides the Indian subcontinent into two. Mahanadi and Narmada are the principal rivers of the state. Narmada has its origin in Amarkantak, which lies in Chattisgarh.

A major part of the Chattisgarh (Bastar) as we know today was known as Dandakaranya in the ancient times. Other parts were known as Dakshina Koshal. In the medieval period, the region, which falls south of the Vindhyas, came to be known as Gondwana. Earliest human settlements were established in this region much before they came into existence in any other part of the country. Historians and anthropologists are trying to establish the exact date for the earliest human settlement in this region.

Right from the beginning, Chattisgarh has been swarmed with migrants from nearby places, who now constitute a major part of the population. Right from the days of great Magadha Empire, Chattisgarh remained part of every empire that ruled the country from north to south, but their dominance was political only. As the region was extremely inaccessible, not much interference could be made in the lifestyle of the tribes. Kalchuris were the first rulers who ruled clearly over this region till 19th century. After the fall of Kalchuris, it was time for the Bhonsles of Nagpur to dominate over this region for a brief period in the 19th century. However with the decline of the Marathas, there prevailed complete lawlessness throughout the region and many tribal chieftains established rule over small tracts of land.

The English recognized the mineral wealth of the region and established a vast network of mines and railway track throughout the region, which marked the beginning of a new phase in the tribal history of Chattisgarh. Today, the state is a heterogeneous mix of races from all over the country working together to create a prosperous Chattisgarh.

Ghotul is a better-known event in tribal life and they have aroused considerable interest from anthropologists to study the tradition. Both boys and girls are allowed to spend a night out in the ghotul (kind of rest house), every week. Ghotuls are regarded as a shrine, built by Lingo Pen, a Gond (a tribe) cult hero. Here, the unmarried boys of the village learn songs and dance from their leader. Besides, every week, there is a dance carnival as well in which the girls also take part. Moreover, It is treated like a pilgrimage.

Dussehra is celebrated with much enthusiasm in Jagdalpur every year.

The state has tropical climate with hot summer and cold winters. Most of the precipitation occurs during the monsoon (July to mid-September). Day temperature during the summers (mid-April to June end) can touch a high of around 45°C while in the winters the temperature may fall well below 10°C.

How to Reach Chhattisgarh

Raipur is the capital of the state and only centre to be linked up with an air network. Indian Airline connects the city with Delhi and Nagpur by regular flights.

Almost all the state is connected with good railway network internally as well as externally. Raipur and Bilaspur are the major railway stations connected to every part of the country.

National Highways 6, 43, and 16 connect all the major cities of the state to other parts in the country like Bhubaneswar, Calcutta, and many places in the western India. There is a good internal road network in the state connecting all the major parts with the state capital. 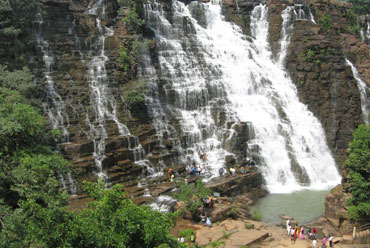