Darjeeling located in the state of West Bengal is situated at an attitude of 6,710 ft in Lesser Himalaya. This UNESCO World Heritage Site is noted for its Darjeeling Himalayan Railways and its famous tea industry. A large number of inhabitants being Buddhist there are lots of old monasteries are present along its length and breadth. The vivid landscapes, tea plantation, eternal weather and the slopes make it one of the most popular tourist destinations of India. Darjeeling is the highest tea exporter and thus, tea tourism in Darjeeling attracts many visitors during the plucking season. In this season one might observe the women in the fields plucking the leaves. The aroma in the hills surrounds international visitors. Darjeeling spread across the area of 3149 sq Km is one of the important shopping centers where visitors can shop for showpieces, clothes handicrafts and showpieces. The tourists in Darjeeling shop for woolen garments, fashion clothes and shawls.

The view of magnificent Kanchenjunga on a clear day is like revealing the treasure of beauty and excitement before a cheerful crowd. There are endless attractions in Darjeeling that place the 'Queen of Hills' at the top of all tourist destinations in the North East of India.

From the officials of the British aristocracy to the modern backpackers and family vacationers, Darjeeling is a cherished destination for all. The adventure seekers find no other place as exciting as Darjeeling. Every Himalayan trail that heads to a magical cave allows the hikers to explore some unexplored adventures. The century-old monasteries tell the unknown stories of the legends that help you learn some amazing ways of life. The serene environment and picturesque views invite romantic couples for a wonderful honeymoon in Darjeeling. For your kids, there is nothing more enjoyable than a toy train ride in Darjeeling.

You can explore a plethora of tourist attractions in Darjeeling such as Tibetan markets in the Mall Road, Observatory Hill, Chowrasta, Himalayan Mountaineering Institute, Darjeeling Rangeet Valley Traveler Ropeway, etc. You can also visit some popular places near Darjeeling such as Pashupati Nath Temple in Nepal border, Tiger Hill, Mirik, etc.

The popular Mall road is commercial street lined by the Tibetans selling hand-Knitted cardigans and is clustered with lot of shops selling souvenirs along with both imitation and real antiques. While exploring the Mall road leads the guest will lead to Chaurasta which is pony riding arena for children.

Observatory Hill is locally known as “Makal-Babu-Ko-Thaan” is the oldest site in Darjeeling. The ancient legends reveal that a Red Hat Buddhist Monastery presently called Dorje Ling stood at this spot. The Dorje Ling was destroyed in the 19th Century. In the present time this observatory Hill is perched by both the Shivas and Buddhist believers.

Chowrasta is the place from where the Mall road originates and finishes. Situated in the heart of Victorian Darjeeling it is a major paradise for the shopping lovers and souvenir collectors. The major shopping items to shop for are tribal ornaments, rosaries, woolen garments, Gorkha daggers and brass statuettes. Local handicrafts are also available for shopping.

The Himalayan Mountaineering Institute was created by the Tenzing Norgay after he conquered Mt Everest with Sir Edmund Hillary on 29th May 1953. The museum display and preserves all the equipments that were used to climb one of the highlights. Near this mountaineering institute is a Zoological garden which is home to exotic wildlife like Siberian tigers, Yaks and Red Pandas etc.

The Darjeeling Rangeet Valley Passenger Ropeway is the first traveler ropeway in India. The reservation of ropeway seats must be done prior. Contact the officer in-charge of the ropeway station for prior bookings of the seat. Frequent share taxi service is available from Market Motor and Taxi Stand is to the Ropeway Station.

Places to Visit near Darjeeling

Take a drive to Pashupati located on the Nepal border where tourist can enjoy shopping for foreign goods at reasonable prices. Also visit the exotic wildlife which includes the rare one-horned Rhino, Gaur, Deer, wild boar etc. Also explore the market area to shop for the Tibetan medicines, musk, wool, silk and spices.

Tiger hill situated at an altitude of 2,590m is located at a distance of 13 km from Darjeeling and is very popular amongst the tourist for a magnificent sunrise view over the Kanchenjunga range. Standing atop this high mountain peak one can also enjoy the view of Even Mount Everest, the world's highest peak.

Located at a distance of 52 km from Siliguri is Mirik. This picturesque land is being developed as a new hill station. It is fondly popular amongst the tourist for its orange orchards, Tea estates and cardamom plantations. The mountains surrounding it are mesmerizing and amazing to view and make you close to Mother Nature.

The other nearby attractions to be explored includes Kurseong, Phalut & Sandakphu, the Tibetan Refugee Camp and the Lloyd's Botanical Garden.

The best time to visit Darjeeling is between the months of April to June along with September to December. Darjeeling experiences a moderate climate during most of the year. In the summer the temperatures range between 14°C and 8°C and during winter temperature falls to freezing point of 6°C to as low as 1°C. During the monsoon Darjeeling experiences heavy rain showers which at time lead to frequent landslides. A lot of tourist visit Darjeeling during summers as it is a favorable time for all tourist activities. For sightseeing the best months would be from September to November. Visitors who like chilly climate should visit Darjeeling around December to January, as it is the best period for honeymooners. The adventure avid can visit Darjeeling in the month of February to June which is idyllic for all adventure activities in Darjeeling.

Darjeeling lies in the north of the state of West Bengal and is situated in the foothills of the eastern Himalayas. The district of Darjeeling shares its boundaries with countries like Bangladesh, Bhutan and Nepal. It is one of the scarcely populated districts of the state with the total population being 1,842,034 and the density of population is 413 persons per sq Km. Located at an altitude of 2134 meters above the sea level and is surrounded by various Buddhist monasteries and the mighty peaks of Himalayas.

By Air: Darjeeling is well connected by air from all the major parts of the country by Bagdogra airport. It is the nearest airport and is mere 3 hours drive away from Darjeeling.

By Road: Darjeeling is well connected to Siliguri, the terminal city as a fleet of state and private buses run overnight from Calcutta to Siliguri. After deporting at Siliguri, enjoy a 2 hours scenic drive while traversing through the forest and tea gardens either by boarding a luxury bus or private taxi to reach Darjeeling. 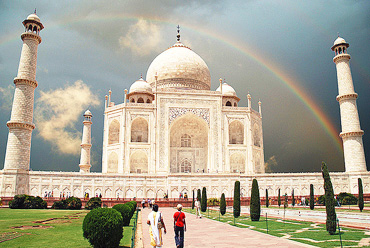 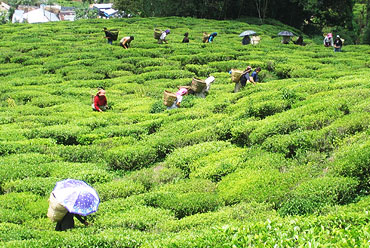