Varanasi (also Benaras) is located in the north Indian state of Uttar Pradesh and extends latitude 25°20' N and longitude 83°00' E. Sandwiched between the rivers Varuna and Ashi as they join the Ganges, Varanasi takes its name from its location. It is also called Kashi, the city of light, but the British, in an endeavor to simplify matters, had coined their own name for the place-Benaras. For a relatively short period, while under Mughal rule, Varanasi was also known as Muhammadabad. Modern-day Varanasi is situated along the west bank of the Ganges (also Ganga) and extends into a myriad collection of narrow lanes that form an integral part of it. The city winds itself around these vines of communication, stretching from one ghat to the other.

Almost midway in its long journey from the slopes of the mighty Himalayas to the inflamed shore of Bay of Bengal, the muddy waters of the Ganges flow by a city that is five centuries older than Christ. The city finds mention in the great epics of Mahabharata and Ramayana. It was already an old city when Rome was founded, and was a flourishing center of trade when Buddha came to Sarnath, some 10 km away, to preach his first sermon in 500 BC. It is a city of temples and for more than 2,500 years, it has attracted pilgrims from near and far. According to Hindu belief, Benaras or Varanasi as it is known, is the cosmic center of the Universe. The renowned American novelist Mark Twain once wrote, "Benaras is older than history, older than tradition, older even than legend and looks twice as old as all of them put together."

Down the ages, Varanasi has stood as a symbol of Hindu renaissance. Swathed in an aura of history, religion, and tradition, Varanasi preserved the rituals and traditions of Hindu philosophy. From a time stretching beyond human memory, pilgrims from distant lands have come to Varanasi in search of divine blessings.

The festive magic never ends in Varanasi. If Poornima cleanses, Maha Shivratri or Naga Panchami blesses. If Holika-Dahan is a celebration, Dhrupad Mela is a revelation…. One does not require making his itinerary according to the dates and months of the festivals. One can come and enjoy the festive season anytime of the year here.

Benarasi mithais (sweets) and the famous Benarasi paan (betel leaf) are two specialties that can be found in this magical city. Both are very dear to the people-traditional and crucial to the social system-far beyond the simple act of cooking, preparing, and eating.

Milk-based sweets are flavored with cardamon, saffron, essence of rose extract, a garnish of nuts, and a fine layer of edible silver foil. Layers of fresh cream lovingly embrace dry fruits that are hidden in the interiors of malai paan. Thickened milk is left out in the dew overnight and then flavored with saffron. This mix is then beaten to a stiff froth-it would put any soufflé to shame. Nimmish is undisputedly a delicacy only for the well to do and that too only in winter. The Benarasi paan is a very heavily flavored betel leaf smeared with catechu (a tannin rich powder called katha), lime paste (chuna), and wrapped around shredded betel nut (supari) and often cardamom pod, aniseed and tobacco. Secured by a clove pierced through the folds of the betel leaf, sweetening agents, peppermint, menthol, and local aphrodisiacs are also added to this elaborate package. Given the acclaimed digestive qualities of all ingredients, it is a perfect way to round off a good and wholesome Indian meal (though most people have a paan safely tucked away into the recesses of their mouth perpetually).

Because of its proximity to the Tropic of Cancer, Varanasi enjoys a pleasant winter with a daytime temperature of around 20°C. The temperature can touch a low of around 10°C in late December and January with heavy fog in the early part of the day. October-November and February-March are usually comfortable and sunny.The summer season is, however, harsh in Varanasi. Beginning in April and continuing through June, it is extremely dry and daytime temperatures often climb up to as high as 45°C. The monsoon season, which starts by late June or early July, brings torrential rains and high humidity to the city. By late September, however, the weather returns to a comfortable level.

How to Reach Varanasi

The nearest airport to reach Varanasi is the city air terminal. Lal Bahadur Shastri Airport is located 25 kilometers northwest of the city center. Regular domestic flights are catered in the airport. Flights from Kathmandu and Thailand are also accessible. Every domestic air carrier caters frequent flight options. From the air terminal; buses, auto and cabs are easily accessible to the city.

Varanasi Railway Station enjoys regular connectivity of trains from all over India. Mughal Sarai Railway station, 10 kilometers from the city also offers train options to numerous destinations in India. Long-haul trains as well as daily ferries are available. The railway station lies close to the city. Autos and cabs take you to any destination in the city.

The numerous ghats along the bank of the Ganges present a varied scene from dawn to dusk. A ghat is a series of well-paved steps that lead to the water. A ghat in Varanasi usually has small temples built into its side, while the larger structures, housing the powerful gods and goddesses from the Hindu pantheon, form a formidable backdrop to the serene beauty of the meandering river. These ghats numbering more than a hundred, with their entourage of temples, form the axis on which the city developed. For centuries, the Hindus considered it very auspicious to bathe at the ghats of Varanasi. Everyday at dawn thousands of pilgrims can be seen offering salutations to the Sun God in waist-deep water, secure in their conviction that the muddy waters of the Ganges will wash away all the accumulated sins of their life. The oil lamps (diyas) and flowers set afloat on the river at dusk make a fascinating sight.

There are five important ghats in Varanasi where the pilgrims flock to take a bath-the Assi, Dasawamedha, Barnasangam, Panchganga, and Manikarnika. Each ghat has its own history and its own following. Many of the ghats were built and owned by the royal families of India; the Maharaja of Benaras built the Kali (or Sivala) Ghat, Maharaja Man Singh built the Mansarovar Ghat, while Ahilyabai Ghat is named after that legendary Queen Ahilyabai of Indore.

The best time to visit the ghats is at the break of dawn, when pilgrims perform the Surya Pranam immersed waist deep in the waters of the holy Ganges.

The best way to catch the essence of Varanasi is to travel down the Ganges by boat at six o'clock in the morning. Boats can be hired by the hour from the main steps of the Dasawamedha Ghat. The steady creek of ancient oars, the slap of wet garments, incessant chatter of the bathers amid a tinkling of scattered temple bells, watching Varanasi from the environs of a gently swaying boat is truly an experience worth treasuring.

Although Varanasi is famous as a Hindu pilgrimage center, one cannot ignore its distinct Muslim heritage. The powerful Sultans of Delhi and later the emperors of the Mughal dynasty were instrumental in constructing several mosques, and this predominantly Hindu city gradually attained a degree of cosmopolitanism. Aurangzeb, the last of the mighty Mughals, hastened this process of evolution and the mosques that he built still stand today. The great mosque of Varanasi, Gyanvyapi Masjid, has minarets towering 71 m above the Ganges and is an integral part of the city's skyline.

There is also the Golden Temple, dedicated to Lord Shiva. The temple today sits across the road from its original site. The present temple was built in 1776 by Rani Ahilyabai, while three and a quarter ton of gold plating on the towers were provided by Maharaja Ranjit Singh of Lahore. Next to the temple is the Well of Knowledge, where, as legend goes, the original Shiva lingam lies hidden.

There is another temple in this holy city-a temple dedicated not to the gods, but to Mother India. The Bharat Mata temple, as it is known, does not have idols or images of gods and goddesses: what it has is a marble relief map of Independent India. The father of the nation, Mahatma Gandhi, inaugurated the temple.

Benaras Hindu University is the largest residential university in Asia, a center of Sanskrit, Indian art, culture, and music. This university covers an area of 2000 acres, and was gifted by the king of Varanasi, a scholar of Sanskrit and Hindu philosopher himself. The university is around 10 km from the railway station.

A tourist to Varanasi must make it a point to visit the Ramnagar Fort and Sarnath, both situated on the outskirts of this city. The former, situated on the opposite bank of the Ganges, is the residential palace of the former Maharaja of Varanasi. The hall of public audience (Durbar Hall) and the royal museum housing collections of palanquins, elephant saddles, arms, furniture, costumes, etc., are of great interest. At the other end of the city is Sarnath. Here in the fabled deer park, where the Buddha preached his sermon enshrining the principles of his teaching into laws. There is a stupa and a large complex of ruined monasteries. Nearby also stands the Ashoka Pillar commemorating the Mauryan emperor's visit to the place more than 2,000 years back. The archeological museum located nearby holds a rich collection of items belonging to the Kushan and Gupta periods as well as from the Ashokan era.

One may also undertake quite a few enjoyable excursions from Varanasi. The fort of Chunar, about 37 km away, is famous for its close association with the Afghan ruler Sher Shah Suri. Kusumi Forest (8 km) and the Rajdari and Deodari Falls in the Chandraprabha forest (70 km) are beautiful picnic spots.

Sightseeing & Things To Do in Varanasi 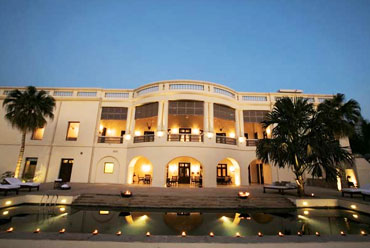