Lucknow is known all over the world for the tehjeeb or the courteous behaviour of its people. It is a rare city. Few places in the world are endowed with such rich cultural traditions, as is this romantic city of the nawabs. Whether it is history, architecture, music, dance, handicrafts, etiquette, or sports, Lucknow has its own story to tell.

Surprisingly, the story of Lucknow began not so very long ago. Though the city traces its origin to the Suryavanshi dynasty of Ayodhya in ancient times, and derives its name from Lakshmana (the brother of Lord Rama), Lucknow actually came into prominence during the 18th century. In 1732, Muhammad Shah, one of the later kings of the once-powerful Mughal dynasty, appointed Mohammed Amir Saadat Khan, a Persian adventurer of noble lineage, to the viceroyalty of the area known as Avadh, of which Lucknow was a part. Saadat Khan was the founder of the famous dynasty known as the Nawab Wazirs-a dynasty that changed the face of this hitherto little-known place. Under his successors, Lucknow flowered as never before and all but became the cultural nerve center of northern India. The rapid growth of Lucknow dates from 1755 when the fourth Nawab, Asaf-ud-Daula, transferred the capital of Avadh from Faizabad to Lucknow and set about gifting to the city some of its most splendid architectural marvels, a tradition that was sustained by this successors. During this period, Lucknow also established its prominent place in the field of poetry, music, and dance. A colorful local culture, incorporating fairs and festivals, also flourished alongside. But what really set Lucknow apart from others was a certain elegance and grace of lifestyle. A romantic and courtly ambience became a part of the city. In fact, even today the city breathes history, and the sound of laughter and music, the tinkling of ankle bells and the mellifluous rendering of Urdu poetry (shairi) still echo and reverberate through the long corridors of time. Even today, when one wanders through the city, s/he will encounter the kind of refined courtesy and polish that seems to belong to another age.

Lucknow today, nestling on the banks of the river Gomti, is a modern, bustling metropolis and serves as the capital of the large north Indian state of Uttar Pradesh. But despite the changes it has undergone over the decades, it still retains the vestige of the culture that once made it one of the most celebrated cities of the land. It represents a harmonized blend of the old and the new; it has the advantages of a big, modern city, without any of the disadvantages. There is a profusion of parks and gardens redolent with nostalgia of another time. More importantly, residents of Lucknow have an extremely relaxed and laid-back attitude to life. So even though Lucknow is a big city today, there is none of the mad rush and hectic pace that one normally expects in a busy metropolis.

The ‘City of Nawabs’, Lucknow is a sheer delight during all round the year but the best time to visit Lucknow is between the months of October and March. This is peak season as the weather condition is very pleasant with slightly sunny days and cold nights.  This time is ideal for sightseeing and relishing sumptuous delicacies of Lucknow cuisine. Rain during the monsoon months of July and September might play spoil sport. From March to June, it is the summer season and the heat is extreme with temperature raising to as high as 45 degree Celsius. Avoid a trip to Lucknow during this time.

How to Reach Lucknow

Lucknow is connected by daily flight from major towns and cities of India.

Lucknow is also well connected to other cities of the country by road. The distances to some nearby cities are as follows: Delhi, 499 km; Jhansi, 340 km; Srinagar, 1394 km; Varanasi, 319 km.

Lucknow abounds with lovely monuments that tell the story of their time. For any visitor to this city, a trip to the various architectural wonders is an absolute must. Among the most important monuments are the Imambadas, the many mosques, the Roomi Darwaza, and the many splendid Mughal architectural marvels.

The Bada Imambada or Asafi Imambada (Imambada: patriarch's place) is an important tourist attraction of Lucknow. It was built by the then Nawab Asaf-ud-Daula in 1784 to provide succor to the famine-stricken people. Apart from the galleries in the interior, there is no woodwork anywhere. The interior vaulted hall, measuring 162 feet long, 53 feet broad, and 50 feet high is said to be one of the largest apartments of its kind in the world. From the outside, a staircase leads to a series of artfully designed labyrinths (bhoolbhulaiyan) where it is very easy to get lost! You could wander through the zigzag narrow galleries for hours without finding your way out! It's a very eerie sensation, moving towards the sunlit corridors that seem to be going out, only to find that you are actually deeper in the labyrinth! Most visitors therefore are only allowed inside with guides who are, quite amazingly, familiar with the maze. In fact, a favorite trick of all guides is to tell the visitor that he will be given 15 minutes to find his way out. Most visitors, needless to say, fail the test! There are also large underground passages that have now been blocked up. Next to the Imambada, in the same compound, is a majestic mosque and to its right, a row of cloisters concealing a huge well, which is said to be fathomless.

The Hussainabad or Chota Imambada is an exquisite building built by Nawab Muhammad Ali Shah in 1839 as a burial place for himself. As you enter the compound, you step into a large courtyard with a rectangular raised tank spanned by a small bridge. The beautiful Imambada, reflected in the placid water of the tank is one of the prettier sights in Lucknow. On either side of the courtyards stand a miniature version of the Taj Mahal. In one of them lies buried Zinat Asuja, the daughter of Muhammad Ali Shah and in the other are preserved the remains of her husband. The walls of the Imambada are embellished with calligraphic verses in Arabic. The interior of the Imambada houses an exotic assortment of objects ranging from elaborate chandeliers and gilded mirrors to tazias made of sandalwood, wax, and paper. A silver railing encloses the graves of Muhammad Ali Shah and his mother. During Muharram, both the Imambadas are ablaze with illumination.

Apart from the Bada Imambada, Asaf-ud-Daula also built the great Roomi Darwaza as a relief work during the famine of 1783. Said to be a facsimile of one of the gates of Constantinople, this soaring edifice, which is 60 feet high, can match any similar structure in point of beauty and splendor.

Then there is the Jama Masjid, a great mosque with two minarets and three domes, which stands to the west of the Hussainabad Imambada. It also owes its origin to Muhammad Ali Shah who started the construction but did not live to see it completed. That task was left to Begum Malika Jahan of the royal family.

The Hussainabad Clock Tower, rising to 221 feet, was started in 1880 and completed seven years later. The clock itself, which was designed by M. J. W. Wanson of London, is said to be the largest in India. Nearby is the Picture Gallery, a double-storey redbrick building built by Mohammed Ali Shah as a baradari. Today, it houses enormous portraits of all the Nawabs of Avadh, most of which were painted in the late 19th century by European artists. The portraits, which have recently been restored, give a good insight into the grand costumes and jewelry favored by the Nawabs.

The Residency was built in 1800 by Nawab Saadat Ali Khan for the British Resident at his court. Originally a very extensive and beautiful building, it received heavy shelling during 1857, when the First War Of Indian Independence took place. The inhabitants of the Residency faced a siege of 140 days before they were rescued by British troops. The red building is today in a dilapidated state and marks of cannon shots can be seen on almost every wall. Surrounded by shady green trees, the ruins of the Residency stand, still and quiet, in the afternoon sunshine. A brooding silence engulfs the ruins and one almost expects the ghosts of the dead to suddenly materialize and flit across the rooms.

A little distance away from the Residency is the glorious Chattar Manzil that served for a while as the palace of Begum Hazrat Mahal, the heroine of India's first fight for independence against the British. For English travelers in the 19th century, it seemed like something out of Arabian Nights! Today this splendid building houses a prosaic Drug Research Institute.

Among the other fabulous monuments of Lucknow are the Kaiser Bagh palaces, built by Wajid Ali Shah, the last Nawab of Avadh, who was robbed of his kingdom by the British and confined in Calcutta where he spent the last years of his life, pining for his beloved Lucknow. The buildings are said to have cost around 80 lakhs when they were built in 1850. Today a great deal of Kaiser Bagh has disappeared (the destruction took place in the 1857 uprising), but the name still applies to the historic quadrangle where Wajid Ali Shah, wearing the dress of a dramatic performer, used to participate in fairs. There are several small pavilions for the performance of plays. The surrounding yellow buildings called Lakhi were, at one time, the harem.

If one were to continue enumerating all the sights and sounds that Lucknow is famous for-like the La Martiniere School for Boys (housed in an Italian style building constructed by Major General Claude Martin for his own residence in 1793) or Nadan Mahal (one of the oldest structures of the city) or Moti Mahal (constructed by Nawab Saadat Ali Khan who used to watch the fights of large animals from Mubarak Manzil, which is in the same compound)-one could go on forever. Perhaps the wise thing to do is to explore this fascinating city on one's own. Apart from the well-known buildings, it is entirely probable that one may discover some concealed gems in the form of the Charbagh Railway Station, Biblapur Kothi, Dilkusha Palace, Zoological Gardens, State Museum, Tarawali Kothi, Khursheed Manzil, Shah Nazaf, Botanical Gardens (Sikandar Bagh), Badshahi Bagh, Aliganj Mahbir Temple, Kaiser Bagh, Mothi Roshan-ud-Daula, Lal Baradari, Lakshman Tila, Dargah of Hazrat Abbas, and the Alamgiri Mosque.

At a distance of 15 kilometers from Lucknow is the Chinhat Picnic Pavilion. There is a rest house by the side of Kathauta Lake. One can also visit the neighborhood Chinhat pottery units. 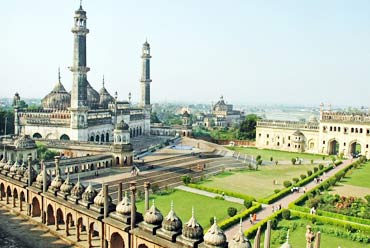