Orchha is the erstwhile capital city of the Bundela rulers. Thus, the town is steeped in history, which is quite evident from its palaces and temples built in the 16th and 17th centuries. The architectural splendor of the monuments in Orchha reflects the glory of its rulers. The Betwa River, on whose banks Orchha lies, and the forests around it attract tourists to this place. If you are keen to know about Indian history and witness architectural marvels, book Orchha packages by Tourism of India. Give us a call and we’ll gladly customize the package as per your needs and interests.

Before that, here is essential information you must know about Orchha MP Tourism.

The ha is linked with the local Bundela rulers. The Bundela dynasty was founded by one of the local Rajput princes in the 11th century who made Garkhurar the earlier capital. The Bundelas ruled the central part of India from Orchha, from 1531 to 1783. Later, Raja Rudra Pratap moved the capital of the Bundelas to Orchha in 1531. The association of the Bundelas with the Mughals created many problems for the Bundelas. Bir Singh Deo, the ruler of Orchha from 1605-27, got into serious trouble with the great Mughal Emperor Akbar in 1602, when he was associated with Prince Jahangir, the son of Emperor Akbar.

Mughal forces destroyed the state of the Bundelas. However, the situation changed in 1605, when Akbar died and Jahangir became the Mughal Emperor. In 1606, Emperor Jahangir visited Orchha and for the next 22 years until 1627, Bir Singh Deo had good relations with the Mughals.

In 1627, when Shahjahan became the Mughal Emperor, Bir Singh revolted against the Mughals. However, this revolt was put down by Aurangzeb, the then 13-year-old son of Shahjahan. Though the Mughals defeated the Bundelas, they revived their lost empire. In 1783, the Bundela rulers shifted their capital to Tikamgarh.

Orchha is located in the northern part of the state of Madhya Pradesh, in the central region of India, besides the Malwa plateau. The Betwa River flows through Orchha. Also, its proximity to Jhansi, a prominent city, makes it easily accessible from various parts of the country.

The best time to visit Orchha is between October and March. The climate of Orchha is temperate. Summers (April-June) are not too hot while winters are cool (November-February) and pleasant. It experiences southwestern monsoon rains from July to September.

How to Reach Orchha

The nearest railhead is at Jhansi (18 km from Orchha). As Jhansi is located on the main Delhi-Mumbai and Delhi-Chennai route, many trains pass and stop here.

We would provide you with all India tourist permit vehicles for the local transportations and intercity drives too.

Orchha has a rich history and thus, there are many palaces and forts you can visit during your sightseeing tour. Here’s a list of popular tourist places in Orchha you can add to your itinerary -

Orchha tourist places include the famous Orchha Fort complex, located on an island on River Betwa, having a number of palaces to visit within. The fort has a four-arched bridge leading to the fort complex.

Formerly a palace, this temple is an important tourist spot. According to legend, Lord Ram appeared in the dream of the then ruler Madhukar Shah who brought an idol of Lord Ram and placed it in this palace, before installing it into a temple. However, when the time for the installation came, the idol refused to move from its present place.The king had to recall his dream, which had indicated that the idol would remain in the place, where it was first placed. Thus this palace became a temple and Lord Ram is worshipped here as a king.

This was the original destination of the idol of Lord Ram. This temple has been decorated with religious symbols on the outside, while the interiors are stark.

This temple has a unique blend of temple and fort architecture. The frescoes within this temple depict social and secular themes. These frescoes have retained their vibrant colors.

A well-laid garden, it was the resting place of the erstwhile Bundela rulers. This garden has fountains, pavilions, and ingenious water ventilation system.

It commemorates the martyrdom of Chandrashekhar Azad, the great freedom fighter, and is an important place to visit.

Other places to visit in Orchha include the shrine of Siddh Baba Ka Sthan, Jugal Kishore, Janki Mandir, Dinman Hardul's palace, Sunder Mahal, and the Hanuman Mandir at Ochharedwara.

The historic city of Jhansi is 13 km from Orchha. It is a famous tourist destination and is known for the exploits of Rani Jhansi, who played an important role in fighting the British during the revolt of 1857. A number of monuments belonging to this period including Jhansi Fort and Rani Jhansi's Palace are important tourist attractions of Jhansi. 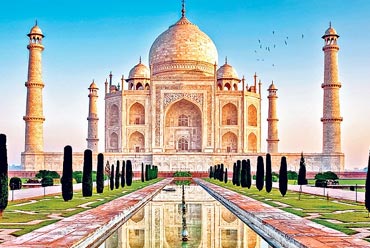