Nestled in the lap of the Himalayas, Uttarakhand has a climate that tempts visitors all through the year. The best time to visit Uttarakhand depends on what you seek. Escape from heat and the bliss of the mountains then summer in Uttarakhand, lasting from April to June is absolutely a wonderful time. For the thrill of skiing, snow and a glimpse of the winter wonderland, come winter and Uttarakhand is at its beautiful best. Snowfall arrive by November and lasts till February. Though monsoon is not believed to be a good time to travel, Uttarakhand makes an exception as even the rains offer myriad of reason to go exploring!

Wildlife lovers and adventure enthusiasts are not disappointed too, the land has much to offer and that too almost all through the year. Also for pilgrimage, there is almost half the year, which is believed to be the best time to visit Uttarakhand for divine blessings.

From Mid-April, Uttarakhand experiences the delight of the summer season. Snow and cold winters have bid their farewells, and spring is in the air. The hill stations, Mussoorie, Nainital, and Ranikhet among others are seen crowded. The heat is unknown in the hills and the weather is certainly salubrious. In fact the land, rivers and the mountains are seen rejoicing. Wildlife expeditions are also on the rise. The thirsty royal Bengal Tigers in Jim Corbett National Park are quite a view to look at.

Also, in ‘Dev Bhoomi’ come summer and doors of salvation, the holy Chardham Yatra begins. While it is possible to take divine blessings all through the year in Haridwar and Rishikesh, for the holy shrines in the upper reaches of the Himalayas summer is the best time for pilgrimage in Uttarakhand. As the snow thaws, the routes to the shrine opens up after an auspicious day of Akshaya Tritiya (April-May) lasting for almost six months.

Along with the bliss of mountains summer is the best time for trekking in Uttarakhand, as is river rafting, camping, mountaineering, biking, g or any of the sports that give you a rush of adrenalin.  It is not wrong to say whether you are planning a romantic journey, spiritual yatra, family getaway or just a dose of adventure, summer in Uttarakhand is divine experience!

Arriving by mid-June and lasting till September, monsoon in Uttarakhand is an impressive spectacle of nature. The season is favorable for traveling as long as you do not mind getting wet. The hill towns appear all the more charming an also hotel prices are low and there are hardly any crowd to disturb your solitude.

In addition, pilgrimage to the holy Char Dham continues with visitors coming in to attain the higher calling. Also, a visit to the Valley of Flowers is a must in the season. It is the only time that the valley transforms into a carpet of flowers of multiple shades. The climate in Uttarakhand in monsoon is one word is, blissful.

With November the faint whispers of winter arrive in Uttarakhand, while it arrives earlier or never leaves in the higher lap of the Himalayas. The chilly winters are here to stay till February and March. Snowfall transforms the land in a fascinating beauty. Auli with its picture-perfect slopes gets all ready to host skiing and also is known as the ‘Ski Capital of India’. The other hill town of Nainital, Mussoorie, etc. look a pretty scene from a photograph. Jungle safari in the national parks and wildlife sanctuaries are on the rise. The roar of tigers or the chirp of birds at Binsar, there is nothing better than these sounds of nature. Also, for a pampering Ayurveda session or to unlock the secrets of Yoga at Rishikesh, March is truly amazing. The International Festival of Yoga is hosted for a week in the holy land of Rishikesh, ‘The Yoga Capital of the World’ along the River Ganges. 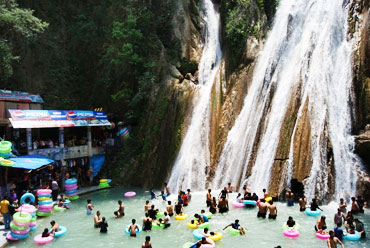 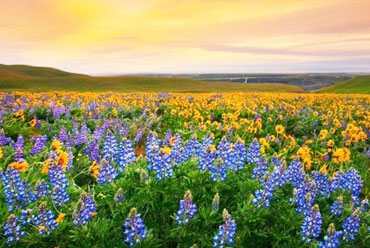