Kanyakumari is a small coastal town in Tamil Nadu, famous for its mountainous terrain, palm-fringed beaches, coconut-lined paddy fields, and iconic monuments.  Earlier it was known as 'Cape Comorin' or 'The Land's End'. Kanyakumari is a paradise for nature lovers, history buffs, and peace seekers as it is home to some of the most beautiful waterfalls and ancient temples.

The unique thing about Kanyakumari is that it is the only place in India where you can see the sunrise and sunset on the same beach. And on full moon days, you can witness the sunset and moonrise simultaneously.

Kanyakumari was once referred to as the Alexandria of the east. This place has been a great center for art, culture, civilization, and pilgrimage for years. It was also a famous center for commerce and trade. During the early part of the eighth century AD, Islam entered the southern part of India through the sea route with traders and missionaries. Through St. Thomas, one of the twelve Apostles of Christ, Christianity arrived in this area in AD 52.

Kanyakumari was also under the control of the Cholas, the Cheras, the Pandyas, and the Nayaks who were great rulers of south India.  During the British Raj, Kanyakumari was granted the dry title of Cape Comorin, necessitated perhaps by the Englishmen's inability to pronounce local names.

Legend has it that Kanya Devi, an avatar of Goddess Parvati, was to wed Lord Shiva, the destroyer in the Hindu trinity. But he did not turn up at the auspicious time and the wedding never took place. The rice and cereals meant for the marriage remained uncooked.

Even today, one can buy stones there that look exactly like rice and cereals. Local folks believe that they are the leftovers of the legendary marriage that could not be solemnized. As for princess Kanya Devi, she became a virgin goddess blessing pilgrims and tourists alike.

Where is Kanyakumari located?

Kanyakumari is the southernmost point of peninsular India and the meeting point of three oceans - the Bay of Bengal, the Arabian Sea, and the Indian Ocean.

The Chaitra Purnima Festival (the April full-moon day, celebrated in the first week of May), Navratri (the last week of October), and the Holy Annual Festival of the Roman Catholic Church (the fourth week of December) are the notable festivals celebrated in Kanyakumari.

What is the best time to visit Kanyakumari?

The best time to travel to Kanyakumari is between October and March. The weather remains pleasant and cool during this time, which makes your sightseeing and beach visits more enjoyable.

How is the weather in Kanyakumari?

Due to its proximity to the sea, Kanyakumari enjoys a pleasant climate and can be visited throughout the year. During summers, the temperature can rise to a high of 34°C while it can dip to a low of 20°C during winters.

How to Reach Kanyakumari

The nearest airport is at Trivandrum (80 km). It is directly connected with Bangalore, Mumbai, Cochin, Delhi, Goa, and Chennai by regular flights.

Kanyakumari is connected to Thiruvananthapuram, Delhi, and Mumbai by broad-gauge railway network. Tirunelvelli (80 km) is the other nearest railway junction and can be reached by road via Nagarkoil (19 km).

Here are the top 5 places to visit in Kanyakumari -

The beautiful statue is dedicated to the successful poet and philosopher Thiruvalluvar. Perched upon a 38-foot pedestal, the statue is an important landmark in the coastal town.

Built to commemorate Mahatma Gandhi, the Father of the Nation, Gandhi Mandapam is the place where his ashes were kept before immersing them in the water. It is interesting to note that the monument is meticulously designed so that the sun's rays on every 2nd October fall exactly in the same place where the ashes were kept.

Fondly known as the Bhagavathy Amman Temple, the shrine is one of the 108 Shakti Peeths of the Hindu Goddess.

An ideal place to spend quality time with family and friends, Kanyakumari Beach offers amazing views of the sunrise, and sunset, Vivekananda Memorial, the lighthouse and the confluence of the Bay of Bengal, the Indian Ocean, and the Arabian Sea.

Other famous places in Kanyakumari include -

What is the average trip cost for Kanyakumari?

INR 16,000 - INR 18,000. This price is subject to change according to the meals, transfers, accommodation, and sightseeing options you choose.

For a customizable tour, check out our best Kanyakumari tour packages. 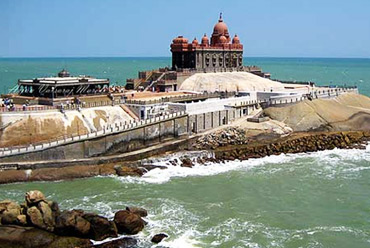