Deeg is a small town situated in the north Indian state of Rajasthan, around 152 km away from Delhi. Once the summer resort of the rulers of Bharatpur, it served as the second capital of the region. This interesting town is strewn with massive fortifications, beautiful gardens, magnificent palaces, and a colorful bazaar.

The Jats, a dynasty that dared challenge the power of the Mughals, once ruled Deeg. The living testimony to their rule is a fort constructed during the reign of Surajmal in 1730s. Surajmal was also responsible for the development of the town of Deeg. In 1776, the reign of Jats ended following their defeat in the hands of the imperial Mughal army under Mirza Nazaf Khan. Nevertheless, Deeg was returned after a decade, but it did not remain free for long. It was again seized, this time by new rulers, namely, the British with their peculiar style of gun power and diplomacy. The British set it free not long afterwards in 1805.

All the major festivals of north India and Rajasthan are celebrated in Deeg including Teej, Diwali, and Gangaur (festival in which women invokes Parvati, wife of Shiva).

Bharatpur is also the nearest railway station from where one can take trains to Delhi, Jaipur, and Mumbai. Nearest airhead is Agra (54 km).

Deeg is an easy day trip from Bharatpur, Agra, or Delhi by road.

Deeg is in the district of Bharatpur. Approaching the town, one can see the battlements of the fort built by Surajmal. This was constructed in the form of a square, measuring about 274 m. The walls are about 20 m high and rise impressively, although the outer coating of plaster has peeled off in many places and shrubs grow from the bottom of the ramparts.

The entrance to the fort is from the north. An outer gateway leads to an L-shaped bridge. Inside the fort is a palace (haveli). This is now in ruins, but one can still see what was once its entrance, an ornate red sandstone construction with a pointed arch. The forecourt was added later and for many years served as a prison. One can see a couple of canons on nearby mounts and, at the top of the northwestern battlement, known as Larkha Burj, another canon lies on its side discarded.

It is from the top of the western wall of the fort that one may view the palace below, built beyond a pond-the Rup Sagar-and alongside the former Purana Mahal. The entrance is to the north. Known as the Singh Pol, it is ornately but simply carved with a couple of lions above the gateway. This building apparently dates from a later period, but was never finished.

Once through it, one is at the edge of the gardens that are built in the char-bagh style, essentially four separate gardens around the same center. The style of both the gardens and buildings are from the Mughal period and yet with a distinctive flavor-a result of the Jats' own aesthetic vision that flourished at a time when the Mughal architecture started to deteriorate. The most striking feature is the fountains numbering about 500. One can see the bases of these sticking up all around the palace, but unless one visits on a Saturday in August, one is unlikely to see the water display operational for it requires a great amount of water. This builds up during the monsoon and is collected in a huge tank at the top of one building that can be seen almost directly opposite the entrance.

It is from the tank that, when the sluices are open, the water flows down and out of the many fountainheads below. These can be seen all around the garden area. A full tank takes only a few hours to empty and about a week to fill. This was achieved by means of bullocks that brought up the water in leather buckets through special chutes at the side of the tower.

The main building in the complex is the Gopal Bhawan, which was the actual residence of the Raja. Here one can see a spacious hall where the Raja was able to greet and address guests while upstairs were the Royal apartments. These can still be seen as they were when used; in one room, there is a raised elliptical dining table, while at the back there is a dining room in the western style.

From the Gopal Bhavan, one can have a good view of the char-bagh. A marble archway forms the support for a hindola (swing). Inscribed on the base is the name of the seventeenth-century Mughal ruler, Shah Jahan. Beyond the Gopal Bhawan is the Suraj Bhawan. This houses its own fountains and is remarkable for its plant decorations on marble slabs that were probably looted from Agra. Other parts of this building also appear to have been taken from other Mughal residences.

On either side of the Suraj Bhawan are two detached pavilions, Sawan and Bhadon, which are designed to look like pleasure barges. During the rains, they allow water to fall down a specially carved chute and later out onto a verandah in a charming display.

Kisan Bhawan : The meeting hall (Kisan Bhawan) lies in the southeastern corner of the complex and sports a series of fountains on its terrace. Here the Raja would discuss with advisors and some affairs of state were debated and decided upon. As elsewhere, one can see the use of Persian carpets.

The other bhawans are the wrestling hall (Nandi Bhawan) and the Kesav Bhawan, a place for members of the public to air their views. This building, situated on the edge of the Rup Sagar, is surrounded by a row of small and larger fountains and now has a support in the middle to prevent it from collapsing. 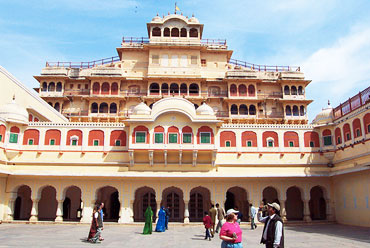 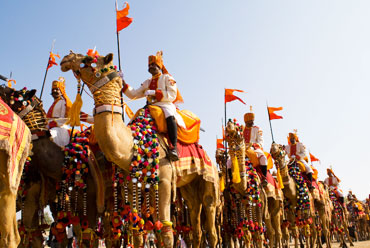 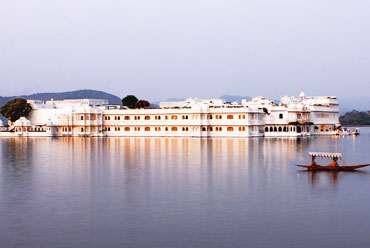 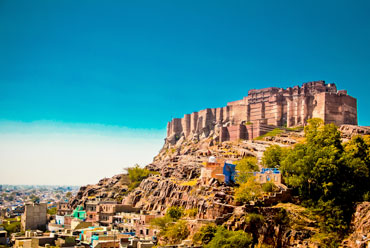 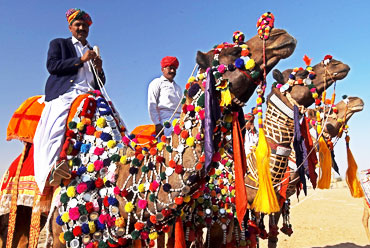 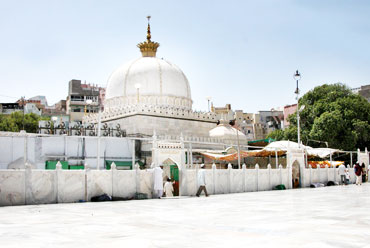 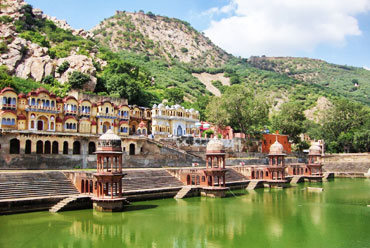 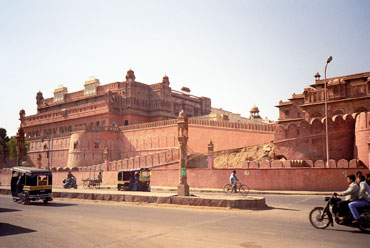 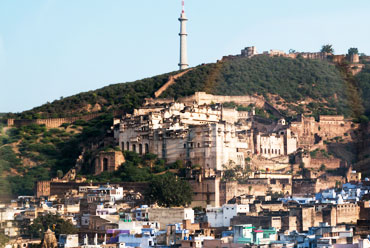 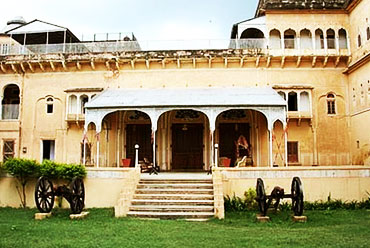 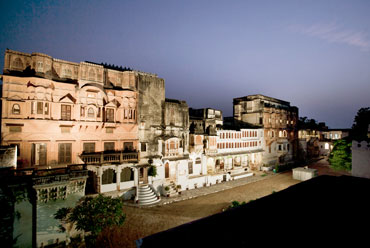 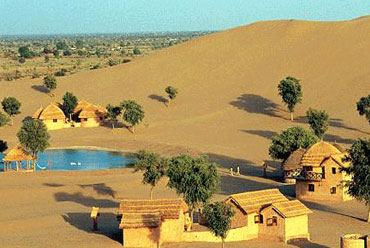 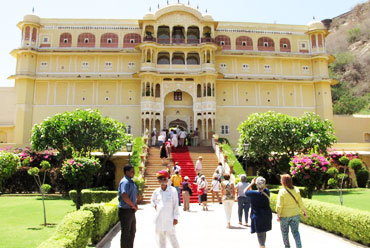 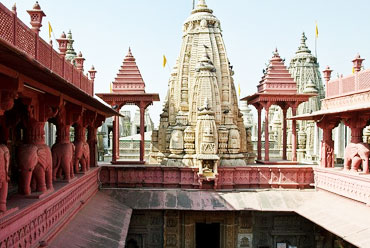