The city of Alwar is referred to as the gateway to the historic and colorful state of Rajasthan, which is located in the northwestern part of India. However, it is more than a mere gateway to the rich cultural treasure that lies beyond: Alwar has its own heritage, which goes back to the mythological legends of the Mahabharata. Alwar has had a chequered history and has been a witness to many rules and rulers. It offers the traveler many sites of historical importance. The ride on the special train, the Fairy Queen is an added attraction of Alwar.

Alwar city is located in the northeastern part of the state of Rajasthan. It lies 170 km south of Delhi and is 150 Km from Jaipur. It is flanked by the barren hills of the Aravali range. The climate of Alwar is temperate, but compared to other cities and towns of Rajasthan it is not too hot. Summers can be hot (April-June) but winters are cool and pleasant (November-February). The cragged hills that surround Alwar protect it from being too hot in summers.

The origin of Alwar city goes back to the time of the Mahabharata. It was a part of the ancient kingdom of Matsya and it is said that legendary Pandava brothers had spent some time of their exile there. The ancient state of Alwar was probably the oldest kingdom in the state of Rajasthan. It is said that the city was founded by a member of the Kachh family hailing from the town of Amber. The local Rajput rulers of Alwar had a sweet-bitter relation with the rulers of Delhi in the early medieval period and there was a constant struggle to take control of Alwar. As Alwar was located at a strategic place, the Mughals annexed it and used it to mount military campaigns against the erstwhile Rajput principalities and states. The decline of the Mughal rule saw a brief struggle between Jat and Rajput rulers. Later Pratap Singh, a noble, restored parity in 1775. The descendents of Pratap Singh were great patrons of art and under their rule Alwar became an important cultural center. The later rulers forged an alliance with the British that soon broke off, with the latter taking over Alwar.

Though the weather of Alwar is moderate, it is advisable to visit it in the winter season (September-February).

An exciting and exotic train runs from Delhi to Alwar. It is the famous Fairy Queen, which is the oldest running steam locomotive in the world. The hospitality and the luxury of this toy train are exceptional. It takes about 3-4 hours to reach Alwar. One can enjoy the scenery of the surroundings en route. We would provide you all India tourist permit vehicles for the local transportations and also for the intercity drives too.

Alwar is well connected to different cities around it by road. Alwar is linked with Sariska, Bharatpur, Deeg and Jaipur by road.

Adhai-din-ka-Jhompara mosque is on the outskirts of the city. Three kilometers beyond the mosque and located on a steep hill is the Taragarh Fort, which offers a breathtaking view of Ajmer city. The small town of Kishangarh is located 27 km from Ajmer and is famous for its traditional miniature paintings. Roopangarh Fort is 52 km from Ajmer and can be reached via Kishangarh. 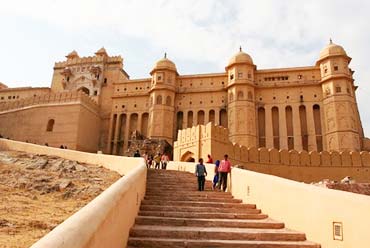 Sightseeing & Things To Do in Alwar 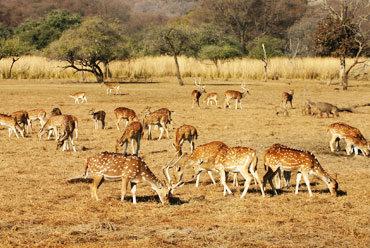