Situated at a distance of 56 km from Indore, the ancient town of Ujjain is one of the holiest cities for Hindus. It is situated on the bank of the sacred river Shipra in the central Indian state of Madhya Pradesh.

Part of an ancient trade route, Ujjain was an important city under King Askoka's father but was known as Avantika at that time. Later, Chandragupta II ruled from here instead of his actual capital Pataliputra. It was at his court that the famous poet Kalidasa, one of the Hinduism's most revered poets, wrote the Meghdoot with its famous lyrical description of the city and its people.

"The town fallen from heaven to bring heaven on earth" wrote Kalidasa about Ujjain. He added, "if heaven is a magnification of Ujjain, then it must be a very interesting place indeed. This is the home of Shiva as Mahakal, he who allocates the existential time of all cosmic manifestation". According to an ancient Hindu calendar, the first meridian of the planet earth passes through Ujjain, making Ujjain time the universal time coordinate. The river Shipra that passes through Ujjain is held as sacred as the Ganges. Ujjain is also one of the sites of the Kumbh Mela, the greatest religious congregation of the Hindus.

In its long history, Ujjain has changed hands many times and has been introduced to many other religions and cultures. In recent times, the Marathas, Muslims and Christians too have tried to make their presence felt but it has retained its Hindu essence and the influence of the other religions has been minimal.

It finds mention in the Hindu mythological tale of churning of the cosmic ocean by the gods and the demons, with Vasuki, the serpent as the rope. It is believed that the ocean bed first yielded fourteen gems, then Lakshmi, the goddess of wealth, and finally the coveted vessel of Nectar. In the wild scramble for immortality, with the demons chasing the Gods across the skies, a few drops of the Nectar spilt from the vessel and fell at Haridwar, Nasik, Prayag, and Ujjaini or the present Ujjain.

The indomitable spirit of Ujjain is best exemplified by the legend of a tree associated with it. On the outskirts of Ujjain is an ancient banyan tree named Siddhwat. The tree is believed to possess extraordinary spiritual vibrations and holy men meditate under it while lay devotees worship it as they do the other gods. According to the legend, a ruler once sought to destroy the tree as an expression of his authority, in spite of his subjects begging him to spare it. The ruler mocked their sentiments and said that if the tree were actually spiritually evolved, it would grow back in spite of his assault. So, he had the tree cut down and covered the mutilated stump with seven iron plates. By the next morning, the tree had burst through the iron plates and come back to its original size. The tree is still alive and the object of redoubled veneration.

Almost all the major Hindu festivals are celebrated here. Having one of the 12 Jyotirlingas, Maha Shivratri, Naga Panchami is a big event here. Thousand of pilgrims flock to the fair grounds near the Mahakal temple to worship Lord Shiva.

The Simhastha Kumbh Mela is a mammoth fair held once in twelve years. The magnificence of the bathing ritual is seen at its best during this fair at Ujjain.

Due to its location, the climate of the city is tropical in nature-very hot in summers and cold in winters. Monsoon brings humidity into the atmosphere during the month of July and August. Visitors are advised to take along light cotton clothes during summer and a comfortable number of woolens for their winter trip to Ujjain.

How to Reach Ujjain

The nearest airport is at Indore, 55 km away, is connected by air to Bhopal, Bombay, Delhi and Gwalior.

Ujjain is an important railway station on the Western Railway network and connected with most of the major cities in India.

One of the holiest of Hindu cities, Ujjain has a plethora of temples that are spread all over the town. The most notable are the Bhaironath (the liquor drinking deity) temple; Mangalnath temple, situated at the place where the first meridian is said to pass the earth; Chintaman Ganesh, the temple said to have been established by Lord Ram himself; Har Siddhi Mata, the family goddess of King Vikramaditya; and deep in the bazaar, Gopal Mandir, a Krishna temple. A popular local saying has it that even if one came with two cart loads of grain and offered only one handful at each temple one would still run short of offering.

While Mahakal is undoubtedly the presiding deity of Ujjain, the other gods of the Hindu pantheon are also well represented in the hundreds of other temples all over the town. One of the major attractions of the town is the Bhasma Aarti held every dawn at the Mahakal temple. In this ritual, the master of cosmic time is propitiated with ash from a cremation ground, the ash being symbolic of the end of a particular manifestation of existential time.

Apart from the temples, the other buildings of Ujjain merit far more than a casual look. "Its houses are like palaces and its palaces are like mountains," wrote Kalidasa, and even today that observation is not very far off the mark. Ujjain is quite simply a traveler's dream destination, one that should not be seen in hurry but savored slowly.

Many of sites in Ujjain are a long way away from the center of town. Therefore, it would be advisable to opt for the easily available auto rickshaws or the more romantic but slower tongas.

Mandu is 152 km from the town. Here, one can visit Taj-ul-Masjid, Shaukat Mahal, Rupmati's Pavilion, and Hindola Mahal, which tell the tales of the kings and queens of the region.

Dewas, 36 km from the town, has a famous Devi Chamunda temple situated on a hilltop. Agar is an archeological site situated 66 km away from Ujjain that must not be missed.

At a distance of 21 km from Ujjain is Ratlam, a town famous for its cactus garden. The garden has over 1,205 species of cacti, one of the largest collections of the plant in Asia. 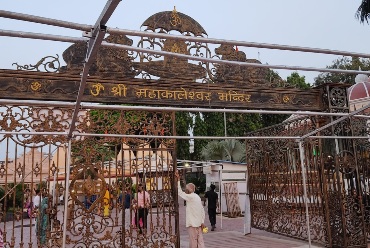