Mysore is located in the South Indian state of Karnataka around 140 km from Bangalore. The city extends from latitude 12°18' in the North to longitude 76°42' in the East. Mysore is well connected through road and rail networks with other parts of Karnataka and India.

Mysore city was the capital of the old royal Mysore province. The word Mysore expands to "Mahishasurana Ooru" which means the town of Mahishasura. The story goes that the demon Mahishasura was killed by goddess Chamundeshwari atop the Chamundi hill near Mysore, hence the name. Ever since, the Mysore royal family has worshipped Chamundeshwari as the palace deity. Hills dedicated to her stand at the eastern end of Mysore town today.

The Wodeyar family ruled Mysore since 14th century except for a short period of 40 years when Hyder Ali and Tipu Sultan were the rulers. Mysore has never failed to mesmerize the tourists with its quaint charm, rich heritage, magnificent palaces, beautifully laid-out gardens, imposing buildings, broad shady avenues and sacred temples. The charm of this city leaves no one untouched.

Dussehra in Mysore is a sight one would remember for a long time even after leaving the place. It is believed that the presiding deity of the city has the power to conquer evil forces and this has led the citizens to celebrate the festival with much gaiety and fervor.

During the month of October and November, for ten days the Dussehra festival is celebrated and the city is at its colorful best with music and dance, Sports, Literary competitions, fairs and exhibitions all over. All this culminates in the Dussehra procession and a torchlight parade on the tenth day.

The weather in Mysore is pleasant throughout the year. The summers are warm and winters cool. April is the hottest month with the daily temperatures varying between 21°C and 34°C while in December, the coldest month here, the temperatures ranges from 16°C to 27°C. The average annual rainfall in the district is 761.9 mm. One can visit the city any time of the year but it is advisable to avoid the rainy seasons.

How to Reach Mysore

The nearest airport from Mysore is 140 km away in Bangalore, from where one can take flights for most of the important cities in India.

Mysore is connected with most of the metros like Delhi, Mumbai, Bangalore, and Chennai through regular trains.

There is a good network of roads that connects Mysore to other important cities of the region. We would provide you all India tourist permit vehicles for the local transportations and also for the intercity drives too.

The Mysore Palace was built over one thousand years ago, in AD 897. Saracenic in style, the palace has both Hindu as well as Muslim influences. After a fire in 1897, Krishnaraja Wodeyar IV rebuilt the palace as we see it today, under the supervision of architect Henry Irwin. The main building is of massive gray granite with a tower covered by a gilded dome. A temple is situated within the royal courtyard.

St. Philomena's Church is one of the oldest churches in Mysore. Built in Gothic style, the church is among the largest in India. Stained glass windows and lofty towers give this cathedral an imposing look.

Shri Jayachamarajendra Art Gallery was established in 1875 and has a rare collection of some beautiful paintings from the same era. The gallery is located in Jagmohan Palace and exhibits paintings by Raja Ravi Varma, Svetsolav Roerich and traditional paintings from Mysore. The traditional gold leaf paintings and some exquisitely carved statues in sandalwood, ivory and stone are also exhibited in the gallery. The old paintings in the gallery have been done in mineral and vegetable dyes and paints.

The Mysore Zoo was set up by the royal family and houses some rare and exotic birds & animals. Situated amidst lush green surroundings, the zoo has acquired fame for breeding some rare animals in captivity.

The Chamundeshwari Temple is one of the noted Hindu places of worship and is situated atop the Chamundi Hill. On way to the Chamundi Hills is the Lalitha Mahal, a guest palace now converted into a heritage hotel.

Situated around 19 km north west of Mysore are the Krishna Raja Sagar Dam and the Vrindavan Garden. The garden attracts thousands of visitors every year who come to see its dancing musical fountains.

Fourteen km northeast of Mysore is Srirangpattnam, an island fortress and the capital of Hyder Ali and Tipu Sultan. Tipu's summer palace, Daria Daulat, has now been turned into a museum.

Sangam, the confluence of two branches of the Cauvery River, is situated around 3 km off Srirangpattnam.

Ranganathittu is a bird sanctuary situated around 18 km off Mysore and allows a close view of exotic and common birds.

Somnathpur is situated around 35 km east of Mysore and is famous for the Hoysala Temples that are still in excellent condition.

Eighty-two kilometers away is the Cauvery Fishing Camp, a paradise for anglers where the mahaseer is found in abundance.

The Bandipur National Park is 80 km off Mysore on the way to Ooty and a famous tiger reserve. Spread over an area of 875 km, the park has a variety of animals such as the tiger, barking deer, tusker, and bison.

Sightseeing & Things To Do in Mysore 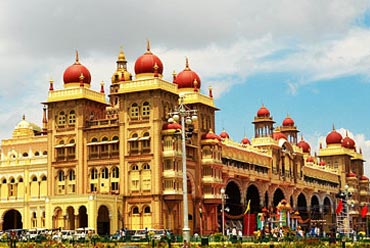