Leh India is one of the favorite tourist destinations located in the northernmost parts of the country. Lapped in the snow-covered fringes of the Himalayas, Leh India has been the center of Tibeto-Buddhist culture since ages. Its colorful gompas have attracted the devout Buddhists from all over the globe. Besides, it is also a favorite hiking locale and is known for some of the best hikes in India.

The capital of the Ladakh district, Leh is towards the eastern parts of Jammu and Kashmir. It is perched at a height of 3,505 m above sea level. The region is watered by the Zanskar River, which flows into the Indus River just below. The Stok mountain range lies just south of Leh, while towards the north one can find the snow-capped Ladakh range. In the winters, it is freezing cold with temperatures going below 0°C.

Leh India became the regional capital in the 17th century, when King Sengge Namgyal shifted his court here from Shey (15 km southeast) to be closer to the head of the Khardung La-Karakoram corridor into China. Very soon, the town blossomed into one of the busiest markets on the Silk Route. Leh's prosperity, managed mainly by the Sunni Muslim traders, came to an abrupt end with the closure of the Chinese border in the 1950s. Only after the Indo-Pak wars of 1965 and 1971, when India rediscovered its strategic value, did Leh's fortunes begin to look up. Today, khaki-clad soldiers and their families from the nearby military and air force bases are the mainstay of the local economy in winter, when foreign visitors are few. It was in 1974 that Leh was opened up for tourists.

If you are interested in sightseeing and adventure activities like river rafting, the best time to visit Leh is during summers, that is, between the months of May to October. This is time when a number of festivals are held in the region, and the weather is salubrious with warm days and slightly chilly nights. You can enjoy sightseeing and attend monastery festivals. The monsoon is scarce. The winter months, November to April, make Leh a beauty covered entirely with snow, with snowy roads that cut it off from the rest of the country. The temperatures go below freezing. However, this duration is extremely popular amidst trekking enthusiasts who explore the place for its challenging winter treks.

How to Reach Leh

Kushok Bakula Rimpochee Airport or Leh airport is connected to important cities of India through regular flights. Leh has direct flights from Delhi, Srinagar and Jammu. While for Delhi, there are regular flights, flight for Srinagar is once a week and it is twice a week for Jammu and Kashmir. You can book flights to Leh, all round the year. From the airport, you can hire a taxi to go to your destination.

Jammu Tawi railway station is the nearest railway station to Leh. State-run buses and private taxis/jeeps can be hired to reach Manali via Shimla. From here, regular taxi/ jeeps and bus services from Manali to Leh are available.

Road journey to Leh is one of the most popular road journeys in India. Private taxis or jeeps or SUVs and frequent state-run buses are available for your road journey to Leh. For adventure seekers, the best way to reach Leh is on a motorcycle. From Manali or from Jammu and Kashmir, bus journey to Leh is exhilarating. If you start your road journey from New Delhi, you might take around 4 days to reach Leh. To arrive Leh, there are 2 popular routes, one is from Manali via Sarchu and Dharchu on the Manali-Leh Highway (night halt in Sarchu) and the second one is Srinagar via Kargil on the Srinagar-Leh Highway (night halt in Kargil). These two roads are only open between the months of June and October, when there are clear of the winter snow. Taxis and bus services, both are available.

A miniature version of the Potala in Lhasa, the Leh Palace is one of the major attractions here. The palace was built in the 17th century and is now dilapidated and deserted. It was the home of the royal family until they were exiled to Stok in the 1830s. Above the palace, at the top of the Namgyal hill, is the Victory Tower, built to commemorate Ladakh's victory over the Balti Kashmir armies in the early 16th century.

The Namgyal Tsemo Gompa, built in 1430, contains a three-story high Buddha image and ancient manuscripts and frescoes. The fort above this gompa is ruined, but the views of Leh from here are breathtakingly beautiful.

The Sankar gompa is located a couple of kilometers north of the town center. The gompa belongs to the Gelukpa order and has an impressive impression of the Buddhist deity Avalokiteshwara Padmahari or Chenresig, with 1,000 arms and an equal number of heads.

The Shanti Stupa was built by a Japanese order and was opened by the Dalai Lama in 1985. From the top, one can view the exotic locales nearby. The stupa is located at a distance of 3 km from the Fort Road.

The Mughal emperor Aurangzeb commissioned the mosque at the head of the Leh Bazaar. The Soma gompa lies near the mosque.

Seventy kilometers from Leh India, on the banks of river Indus, is the Alchi gompa dating back to the 11th century. It is one of the largest and a famous monastery with a widely renowned collection of paintings.

At a distance of 45 km south of Leh, Hemis is one of the biggest gompas in Ladakh. Built in 1630, it belongs to the red sect, Brokpa. It is also known as Chang Chub Sam Ling or "the lone place of the compassionate person." To commemorate the birth of the renowned Indian sage, Padmasambhava, the annual Hemis festival is held in the month of June/July.

Situated on the opposite bank of the Indus across Thikse, the Matho gompa was established in the first half of the 16th century and has a valuable collection of old and beautiful thangkas, some in the form of 'mandalas.' Its annual festival of oracles in early March is an important event in the Ladakhi religious calendar.

Until the 16th century, the Shey gompa was the royal residence. It is located at a distance of 15 km south of Leh. This Palace Monastery has the largest statue of Maitreya Buddha (the Buddha to come) in Ladakh. Erected in the mid-17th century, worked out of gold and gilded copper sheets with blue hair, it stands 17.5 m high.

At a distance of 8 km from Leh, standing majestically on top of a hillock overlooking the Indus Valley, lies the Spituk Gompa. It was built in the 15th century and houses a collection of ancient masks, antique arms, icons and thangkas. Higher up the hill is the Mahakal Temple, containing the shrine of Vajrabhairava.

About 20 km south of Leh, Thikse gompa is an imposing monastery and one of the finest examples of Ladakhi architecture. It belongs to the Gelukpa order. The 12-story monastery complex contains numerous stupas, statues, thangkas, wall paintings, swords and a large pillar engraved with the Buddha's teachings.

Belonging to the Brokpa sect, the Phyang gompa was built in the 16th century. Located at a distance of 16 km from Leh, it houses hundreds of statues, thangkas, old manuscripts and some old weapons.

The Bagso gompa is located 40 km downstream from Leh, and was the seat of power of a branch of the Namgyal family. It is here in AD 1680 that invading Mongol and Tibetan armies were held in check over a three-year-long siege. Original 16th-century murals and other arts of Bagso are worth seeing.

About 45 km from Leh, the Chernry gompa is situated in a picturesque valley leading to Changia. It was constructed upon Sengge Namgyal's death in 1645. A large collection of scriptures with title pages in sterling silver and the text in gold letters is kept here.

Precariously perched atop a 200-meter-high crag, the Mulbekh gompa has an imposing rock carving of the future Buddha. On the other end of the valley is a phallus-shaped rock with a monastery at its base.

At a distance of 50 km east of Leh, the Thak Thog gompa is the only monastery belonging to the Nying-ma-pa order. Gum Rinpoche (Padma Sambhava) is said to have founded this monastery and the temple where he meditated is still to be seen here. Tu-Phuk houses the images of Guru-Tsan-gyet (eight forms of Padma Sambhava), Guru Takpo Tsahl and the 11-headed Avalokitesvara. The new monastery is built on ground level and contains the image of Guru Nang Srith Zilon in a central position. To its right is an image of Guru Dorje Dolo and on the left is an image of Guru Padma Gyalpo. There are seats for the Dalai Lama and Taklung Rinpoche (the incarnate Lama of the monastery). The monastery stages two festivals every year. Thak Thog Tse Chu is held from the ninth to the eleventh day of the sixth Tibetan month. Thak Thog Wangchogis is held from the 26th to the 29th day of the ninth Tibetan lunar month.

Near Leh, the town of Choglamsar is an important center for Tibetan Buddhism and the study of Tibetan study and culture. One can find here a Tibetan library, medical center, handicraft shops, study center, bookshops, plenty of restaurants and the Central Institute of Buddhist Studies. 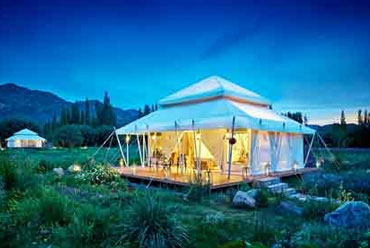 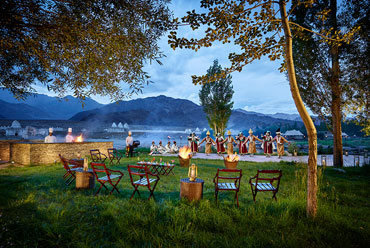