During the course of its history, Goa has been under the reign of several rulers. You can get a sneak-peek into the eventful history of this beach state by exploring the forts of Goa. The surroundings of the fort are lush and serene, attracting tourists from all around. Most of these are Portuguese structures. Most of the Goan forts though are in ruins but they still haven’t lost their charm and splendor.

Following are the popular forts in Goa that are historic examples of military, political and economic importance:

Arguably the most popular fort in Goa, the Aguada fort is around 18 km from Panaji and is placed on a hilltop, close to the mouth of Mandovi River. The fort was built in 1612 by the Portuguese rulers. This is one of the largest forts built during the era. Two things of historical importance are worth exploring inside the fort, an old lighthouse and a well are. Your visit also includes a chance to see the largest prison of Goa.

Overlooking the mouth of the Terekhol River, Terekhol fort is located in northern Goa. It was constructed in the first half of the 17th century by Maharaja Khem Sawant Bhonsle, the ruler of Sawantwadi. The fort of Terekhol houses a church within. The view of the confluence of the river and the sea is the highlight of your visit to this place.

One of the most popular forts in Goa, Chapora Fort offers an amazing view of the Vagator beach. It was built as a border watch post in 1612 by the Portuguese. The view of the sea, beyond the collapsing walls of the fort is breathtaking. Visitors can enjoy undisturbed views of the sea. The shooting of the Bollywood movie Dil Chahta Hai has made the fort truly memorable.

The Corjuem fortress is settled on a small island located at a distance of about 6 km from Aldona. Constructed in the year 1551, the small fort protected the Portuguese from invasions in the nineteenth century. The fort has the distinction of being one of the only two inland that are surviving till date. The fort has become popular for its beauty. Enjoy the view of beautiful villages and islands nearby.

The fort of Reis Magos was built by the Portuguese Viceroy Afonso de Noronha between 1551 and 1554. It played an important part in the defense of Goa in 1739. The fort is tactically located at the merger of the Mandovi River with sea. This helps it to prevent any attack on the city of Panaji by Sea. This is the only well-preserved fort in Goa. The fort is a prominent tourist attraction. Visit the cultural centre and the nearby Reis Magos Church. The fort commands wonderful views which make for great photographs by which to remember your Goa vacation.

The Sinquerim Fort stands overlooking the Sinquerim beach. The fort divides the shoreline into two. This fort was constructed in the year 1612 to guard Goa against the Dutch and the Marathas. The fort served as a reference point for vessels. Adjacent to the fort lies the Taj Holiday Village resort. At a short distance one can see the Candolim beach and the river princess marooned amongst the waves. At the Sinquerim beach, there are many tour operators who conduct watersport activities such as jet-ski rides, paragliding and dolphin tours.

The Cabo De Rama Fort is situated at Canacona taluka in southern Goa. It is said that Lord Rama, the hero of Ramayana stayed here with his wife during their 14 years of exile. The fort has been under Portuguese and Indian rule, changing hands several times. This fort is mostly in ruins. The only remaining structure that stands in one piece is the church. Visit the fort for a blissful view of the Arabian Sea and the nearby Cabo de Rama beach. It is the perfect place of serenity to be away from stressful life. Enjoy.

Rachol fort is positioned to the northeast of Margao. The exact date of its founding is not known but it is well known for its battles between the Vijayanagar and Bijapur empires. In 1520, the Portuguese took the fort in exchange for military help against the Muslims. The Rachol fort is not known for its architectural delight but is significant for its scenic beauty.  Most of the fort has been ravaged by changing tides of time. The only thing that stands till date is the gateway which leads to the seminary.

The Nanuz fort is located in the Sattari Taluka of North Goa. Built in the 17th century by the Maratha ruler, Shivaji the fort was later taken over by the Portuguese. Though mostly in ruins it draws many tourists. The fort is surrounded by natural beauty. Spend some time in the pleasing environs. The nearby village is a good place to get away from cities.

The Mormugao Fort is located in the northwestern point of Salcette. It stands as guards to the entrance to the port of Vasco. The construction to Marmagoa Fort was started in 1624. At one time in history the fort contained three magazines, a chapel, five prisons and huge bulwarks. Today amidst the ruins the only structures that have survived are the chapel and the fort wall. Explore the ruins, it is a practical lesson on history and military efficiency.

The Anjdiv fort located on the Anjdiv Island lies on the border of Goa and Karnataka. The small yet sturdy fort was built by the Portuguese in the year 1505 A.D. The fort was captured by Indian forces on 18 December 1961 during Goa Freedom Movement. The whole operation is known as Operation Vijay. At present there is a naval base all around the island, as a result the fort and island is not easily accessible to the general public. 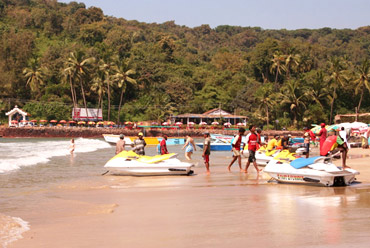 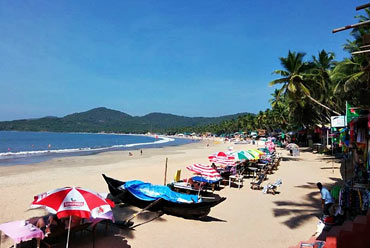 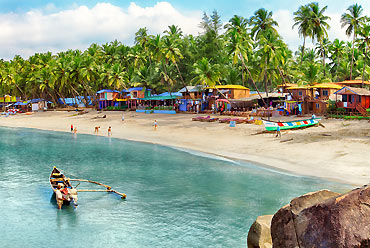