Built on a raised platform on the outskirts of Jodhpur, Udai Mandir is amongst the finest examples of architectural brilliance. The temple stands on 102 pillars at a raised platform. Admiration for the structure starts rising from the entrance gate itself, as it is completely carved out of sandstone. The use of sandstone for decoration from the entrance gate, goes high to the upper part of the temple.

On entering inside, beautiful wall paintings of Nath Yogis performing different yoga asanas, made up of gold is most likely to catch the interests of an art and architecture lover. On shifting the focus from these wonderful paintings, one can spot the main hall of the temple, which is known as the ‘Garba Griha’. The upper portion of it has been kept covered with cloth, while its surroundings are occupied by pots of gold. There also lies a massive door, which is entirely made up of sandalwood.

Exteriors of Udai Mandir boast of gold polishing, which in the current form has still not lost its original sheen. Flaunting such detailing, Udai Mandir has managed to prove itself as one of the top tourist attractions in Jodhpur, every passing year.

How to Reach Jodhpur

By Air: The city of Jodhpur has a well operational domestic airport that operates regular flights from Delhi, Mumbai, Jaipur and Udaipur. It is only 5 km away from the city center.

By Rail: Rail journey can also be a good alternative to reach Jodhpur. The city railway station has a fairly good connectivity with cities like Mumbai, Delhi, Chennai and Kolkata. One can also travel via the highly luxurious ‘Palace on Wheels’ train as Jodhpur stays amongst its top visited places.

By Road: Well maintained road transport system makes Jodhpur easily accessible via roads as well. Comfortable bus journey in deluxe Volvo buses from Delhi and Jaipur can prove to be a nice alternative to reach Jodhpur.

Jodhpur is renowned as the ‘Sun city’ of Rajasthan. This clearly states the heated weather conditionsthe city has to endure every summer season. Thus, clearly avoiding that, one must plan a visit to this vibrant city post summers, between the months of October and March. 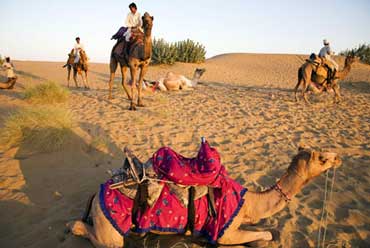