The small state of Haryana, spread over an area of over 44,000 square kilometers, was founded in 1966 when the former state of Punjab was divided into Haryana and the modern Punjab. It is both the oldest and most modern of places.

Most of tourists who come to India pass through Haryana, the state that surrounds Delhi on three sides, the capital of the country, and whose highways lead to Agra, Rajasthan, and Himachal Pradesh. As they drive through, tourists are treated to the view of neat and abundant green fields, and a growing number of modern residential complexes and industrial townships. For those who want to relax for some time during the journey, there are numerous roadside resorts with which the state government has dotted all the major highways.

However, there is much more to discover and enjoy in the state of Haryana.

Located in the Northern part of India, Haryana is bound by Uttar Pradesh in the east, Punjab in the west, Himachal Pradesh in the north and Rajasthan in the South. The national capital territory of Delhi is next to Haryana. Haryana is situated between the latitude 30.30° North and longitude 74.60° East.

Most of Haryana is in the plains with the Aravali mountain range starting its westward journey from here. The Yamuna is the only major river that passes through this small state, which is one of the greenest in the country. There is a very good network of canals throughout the state, giving it the much-needed impetus for agriculture, the mainstay of Haryana's economy.

The treatise written by Manu, the lawgiver in Indian mythology, designated Haryana as Brahmavart from where the Brahmanical religion and social system grew up and spread outwards to the rest of the country. In a sense, therefore, one can say that much of the Hindu religion and society was formed on the flat, dry plains of the present-day Haryana. In the epic of the Mahabharata, it was at Kurukshetra, during a battle between that Kaurava and Pandava princes that Lord Krishna delivered one of his most important messages through the celestial sermon-the Geeta.

With Delhi as the prize awaiting generations of invaders, Haryana served as a sort of a geographical corridor. Over the centuries, waves of invaders poured across the plains of Haryana, sometimes fighting battles there. At the end of the 14th century, Timur led an army through the state towards Delhi. In 1526, the invading Mughals defeated the armies of the ruling Lodi dynasty at the Battle of Panipat and 30 years later, in 1556, the Mughals won yet another decisive battle there. By the mid-18th century, the Marathas were in control of Haryana, an era that was brought to an end after the Afghans under Ahmed Shah Abdali defeated the Maratha forces in the third battle of Panipat in 1761.

Besides all the other festivals common to the rest of the country, Haryana celebrates Lohri with deep religious fervour. It is celebrated on the 13th of January every year. The temperature at this time drops to an all time low and there is a biting chill in the air. Bonfires are made into which sugarcane, parched rice, sesame seeds and monkey nuts are put as offerings to the fire and the blessings of the goddess of Lohri are invoked.

The Harvest festival (in April) of Baisakhi in Haryana is an experience of a lifetime. Both in Haryana and Punjab, farmers start harvesting with great jubilation. It is one of the liveliest celebrations and involves dance, music and feasting.

The most picturesque festival is the Teej festival, celebrated with the onset of the monsoon. This is the time when the oppressive summer heat is cooled by welcome showers. In Haryana, it is seen as a rejuvenation of life-in leaves, in grass, in man. Woman walk around with hennaed hands wearing tinkling glass bangles and colourful dresses and fast for the long life of their husbands.

In the rural parts of Haryana, the festival of Sanjhi is celebrated in the month of October. 'Sanjhi' is the name given to the image of the mother goddess Durga as designed by the women of rural Haryana.

A modern day celebration in Haryana is the Vintage Car Rally. An event organized by the owners of a newspaper 'the Statesman'. It is a day of shining brass, tooting horns, period costumes and happy smiles. The Sohna Hill climb is the test for the old models-a perfect path dotted with delightful tourist facilities.

The Surajkund Crafts Mela is the largest crafts fair in India, is celebrated in the month of February for fifteen days. Every year thousands of craftsmen come from all over the country to show and sell their wares. Cultural programmes are organised during the festival every day.

Climatically, the state of Haryana has three major seasons. The summers are the hottest months (April to June) when the mercury normally remains over 40°C. This is followed by the monsoon, which continues from July to September. The average annual rainfall in the state is 580 mm. The winter months are extremely cold with the temperature hovering around 5°C most of the time from November to February.

How to Reach Haryana

The Chandigarh airport is connected to other places in the country like Delhi, Amritsar, and Leh. Proximity to the Indira Gandhi International Airport at Delhi gives the state greater access to places in India and abroad.

All the major places in Haryana are connected to Delhi and other important centers all over the country in India by a good network of trains. Both the Central and Northern Railways have extensive networks in the state.

Just around the corner from south Delhi, a mere eight-kilometre drive away lies Surajkund with its large sun pool and amphitheatre. Built during the 10th century AD by Raja Suraj Pal of the Tomar dynasty, Surajkund combines proximity to the national capital with many amenities and comforts in an ambience that is typically rural and far away from the trappings of the urban centres.

Also within an easy motoring distance from New Delhi is the Badkhal Lake. Here, the Aravali hills are on the fringe and the lake offers special opportunities for water sports such as canoeing, kayaking or just a simple boat ride. In addition, there is a luxury yacht for those interested. But the real attraction of Badkhal Lake are its serene waters around which small cottages have been built at an elevation, thus affording the occupants a splendid view of the lake alive with the activity of birds during the winter months.

Farther afield, yet well connected to Delhi and on the National Highway No 1, is another manmade lake, named after Karna, one of the heroes of the epic Mahabharat. Having been carved out of a marshy area, the Karna Lake offers all the advantages of a designer complex with charming cottages overlooking a landscaped garden and tall eucalyptus trees planted to act as a barricade against the noise of the highway. Other trees and the emerald waters of the lake become the home for the pied crested kingfishers, darters, ducks and geese during the winter months.

Haryana is proud of its many lake retreats besides Badkhal and Karna. There is the Tilyar Lake at Rohtak, 70 kilometres away from Delhi, with facilities like boating and kayaking. In a different direction and located 64 kilometres from Delhi on the old highway to Alwar, is the Damdama Lake with cottages built on higher ground and mirrored in the calm waters of the lake. A camping complex for the adventurous is also there and facilities for sports such as rock climbing on the surrounding Aravali ranges, canoeing, kayaking, cycling and trekking are all available.

Not far from the Damdama Lake is Sohna, named thus after traces of gold were found in the nearby waters in the old times. Sohna has become quite popular due to the annual Vintage Car Rally that takes place in February. Motorists drive the 56 kilometres from Delhi and come to rest and picnic here, half way away from the venue of the rally.

If one wants to get away from Delhi towards the shadow of the mountains, there are the Yadavindra Gardens at Pinjore, just 22 kilometres from Chandigarh. Here, a historic building belonging to the 17th century is set in a Mughal garden, with a waterway surrounded by green lawns. A later addition to this beautiful spot is a Japanese garden.

Kurukshetra in Haryana is the name given to an area covering 48 kosas (an Indian unit of measuring land) where 860 places of pilgrimage related to the Mahabharata exist today. The important sites are the Brahma Sarovar, Sannihit Sarovar, Gurudwara Sadbhiti, Thaneswar Tirtha, and Rajghat.

Near Kurukshetra, Thaneswar is a sacred town for Hindus because Lord Shiva in the form of the lingam (phallic representation of Shiva) was first worshipped here. Also situated here is the tomb of Sheikh Chilli Jalal. It is a fascinating monument, octagonal in shape, crowned with a dome of white marble and surrounded by a white marble courtyard. Also worth a visit are the Chini Masjid and Pathar Masjid, two outstanding Islamic monuments.

Sightseeing & Things To Do in Haryana 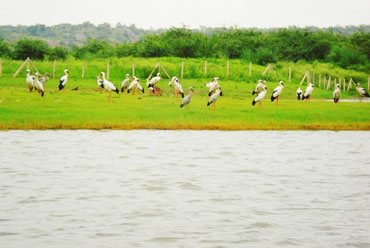 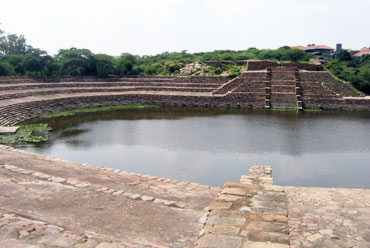 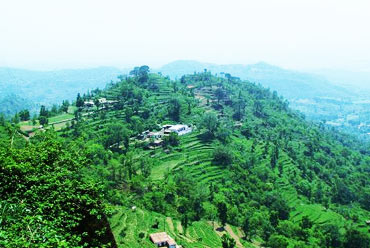 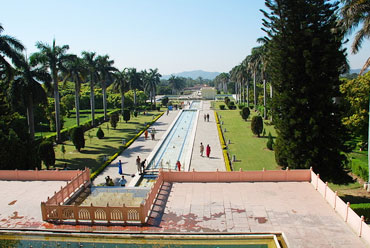 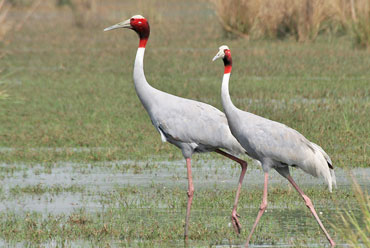 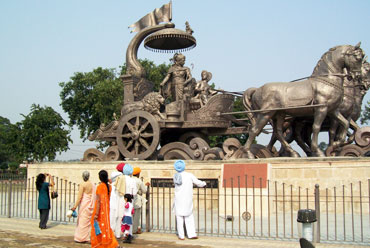