Gondal is situated in the Indian state of Gujarat around 60 km from the district headquarter of Junagadh. A good road network connects Gondal to Rajkot, a major transport hub.

The climate of Gondal is generally pleasant. The summer season extends from March to June with daytime temperature reaching to around 42°C. The monsoons are from July to September. Winter season sets in during October and extends until February. In association with cyclonic storms or depressions in the Arabian Sea in the post-monsoon months and to a lesser extent in May and June, Gondal experiences strong winds and widespread rain. Thunderstorms occur in June and July. In the cold season occasional fog occurs. The summer temperature ranges from 24°C to 42°C and winter temperature ranges from 10°C to 24°C. The annual rainfall is around 276 mm.

How to Reach Gondal

Rajkot (40 km) is the nearest airport from Gondal. There are regular flights from Rajkot to Mumbai.

Rajkot is the nearest railway station situated on the Western Railway broad-gauge network.

Gondal has good road connection to other cities in western India including Ahmedabad, Rajkot, and Mumbai.

Gondal has much to offer by way of sightseeing to the visitors. Built in 1875 AD by Maharajah Bhagwat Sinhji for his son Yuvraj Bhojraji, the Riverside Palace is set in lawns and gardens beside the river Gondali. There are two marvelously appointed sitting arrangement-the living room furnished in typical colonial style with chandelier, antique wooden furniture and sofas, and the Indian room decorated with beadwork, brassware and paintings-and many pleasant sit-outs on the terraces and galleries overlooking either the river or the garden.

The oldest extant palace in Gondal, the 17th-century Naulakha Palace is a festival of stone carvings with exquisite jharokhas (balconies), a fabulous pillared courtyard, delicately carved arches, and a unique spiral staircase. The large chandelier-lit durbar hall has stuffed panthers, gilt wooden furniture, and antique mirrors. The private palace museum has an impressive display of silver caskets which carried messages and gifts for Maharajah Bhagwat Sinhji on his silver jubilee as ruler of Gondal, one of the many golden caskets received by him on his 50th anniversary, the weighing scales on which he was measured against silver and gold on the respective anniversaries, and princely relics.

Located in a huge complex of fruit orchards, lawns and gardens, the Orchard Palace is a wing of the Huzoor Palace (the present royal residence) where the ruling family of Gondal entertained personal guests including relatives from other princely states of Gujarat. The 'room of miniatures' is a splendid sitting room with a collection of miniature paintings, brass, and antique furniture.

The Royal Garages have an extensive collection of vintage and classic cars including a 1910 New Engine, a Delage and a Daimler from the 1920s, a 1935 Mercedes, 1935 Packard two-door convertible, 1941 and 1947 Cadillac, 1955 Cadillac limousine, sports cars from the 1950s and 1960s like the Mercedes 300 SL, Jaguar XK 150 and Chevrolet Camaro, numerous imposing American cars of the 1940s and 1950s, a fleet of four-wheel drive vehicles from the World War II and post-war period, and some contemporary sports cars. Most of these cars are restored and some bear the original Gondal state number plates. There are plans to restore a selection from the extensive collection of horse drawn carriages, which includes Victorian showpieces and a Shetland pony carriage.

Then there is the Bhuvaneshwari Ayurvedic Pharmacy, which still makes traditional herbal medicines according to ancient principles. The Bhuvaneshwari Stud Farm has remarkable specimens of Kathiawadi horses, Gir cattle and other ethnic breeds of livestock, which have won prestigious awards at national level and prizes at local horse and cattle shows. The Swaminarayan Temple has an awesome aura of devotion and some lovely wall murals of the various Swamis who preached this faith. The Sangram Sinhji High School is a model of Eton in Gondal, with some fabulous Gothic architecture, Italian marble floors, old European laboratory equipment, an antique clock tower, and intricate wooden ceilings. Spinning, weaving, brass boxes, silver smithy, beadwork, woodcarving, etc., are some crafts of Gondal.

Gondal is the staging post for many interesting day excursions. Junagadh, 60 km south of Gondal, is one of India's most historic cities, known for its third-century BC Ashoka rock edicts, the magnificent Uperkot Fortress, splendid royal mausoleums, Darbar Hall Palace Museum, Junagadh Museum, and Sakkarbagh Zoo.

The 3,660-ft-high Girnar Peak has exquisite 12th-century Jain temples on the summit and holy Hindu temples in the foothills.

Dhoraji, which was the second most important city of the erstwhile Gondal state, has the Darbargadh Palace, which is a fabulous maze of traceries and sandstone sculpture.

The textile town of Jetpur, 30 km from Gondal, is known for its screen printing, block printing, and yarn dyeing workshops.

Rajkot, 40 km from Gondal, is known for the Watson Museum, Mahatma Gandhi's old residence, and its handicrafts and textiles. 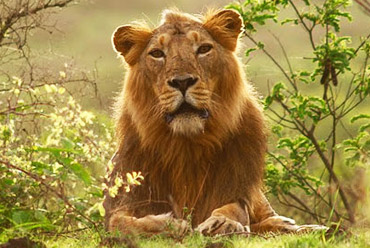