India and colors go hand in hand. And you will understand this when you will witness rainbow-hued sarees of women, clouds of Gulal powder, and colored powder inviting you in stalls and shops. India gets covered in colored powder for the two days corresponding to the Hindu calendar month of Phalguna every year. On the first night, you will find a giant bonfire set up in the streets of metro cities and towns. The bonfire lighting ceremony is known as Holika Dahan or “Little Holi” (in locals slang). Around the large and controlled outdoor fire, people dance, sing, and celebrate the victory of good over evil (We will explain this guide the reason behind this). On the second day, people paint each other's faces with vibrant colors, including “Gulal,” which is known as “Dhulendi.”

Holi is one of the most intriguing festivals considered second to Diwali in terms of popularity in India. The celebration is a commencement of spring and the end of winter in India. It is the day when prismatic many-hued forms are seen in the streets of India. When Holi strikes in India, it comes with the advent of spring, and even foreigners on their India trip gear themselves joyously with a splash of colors. This festival of color lasts for two days, but the kaleidoscopic blend of multi-hued colors is concentrated on the final day! The festival of Holi is a great opportunity for travelers, especially foreigners, to dive deep into the enchanting Hindu culture. It is a first-hand experience that will teach you why India is called “Incredible.”

When is Holi Celebrated in India?

India is a cultural deck, and so Indians believe in their traditional values. According to those values, Holi is celebrated in India by most Hindus during the spring season for 2 days. Talking about its celebration in India, Holi is celebrated as per the Hindu Lunar month of Phalguna every year, usually in early/mid/late March.

How is Holi Celebrated?

As we mentioned, the first night before “Dhulandi” (Big Holi), people set up controlled bonfires. The first night before the colorful gathering is marked by the throwing of roasting coconuts, popcorns, and roasting grains. On the day of Dhulandi (the Second day), people accumulate together into the streets for smearing each other with colored waters.

The prime theme for celebrating Holi is the victory of good over evil. It is also celebrated to spread happiness and love amongst people. Plus, Holi is celebrated during harvest Spring, so people consider it thanksgiving for a good harvest. Coming to the point, like any other Indian festival, Holi too is associated with popular legends or interesting stories. What are those popular legends or stories behind Holi celebrations? We are here to tell you! Read on!

As per legend and Vaishnava Theology, Holika Dahan's story states that there was a king named Hiranyakashipu; he was the king of demons (Asura) and known for his cruelty. He was suggested by the Daitya Guru Shankar to do intense penance in order to impress Lord Brahma. He obeyed the order and received the immortality boon from Lord Brahma after strong penance. Hiranyakashipu wanted to rule the three worlds of Hindu tradition including Earth-Atmosphere, and the world of Gods. His intentions were to become powerful that could leave the Gods and the Devas perplex. Hiranyakashipu wanted that everyone should worship him, including his child - Prahalad. But his own son was a devotee of Lord Vishnu and thus refused to worship his father (Hiranyakashipu). The king of demons felt insulted by his son's disobedience and made a plan to kill him plenty of times but failed in every attempt.

At last, Hiranyakashipu asked his sibling, Holika, for help. She was also the evil sister and got the boon that she would not be hurt by fire. Hiranyakashipu asked his son Prahalad to sit on the lap of Holika as she sat on a pyre. Lord Vishnu's devotee, Prahalad, happily accepted his father's order and believed Lord Vishnu will save him. But due to evil intentions, the power of Holika became ineffective, and in return, the demon sister was burned into ashes, and Prahalad was saved. Since then and till now, people celebrate the first day of Holi by burning Holika to celebrate the victory of good over evil.

The second legend associated with the Holi is linked with Lord Krishna and Radha. The story or legend depicts that Lord Krishna was fed with poisoned breast milk of the she-demon, “Putana.” Due to which his skin color changed into blue. Later, when he became young, Lord Krishna complained to his mother - Yashoda, why Radha was so fair. His fair-colored skin became a matter of concern for him because Krishna was afraid he would be liked by Radha or other girls in the village. Giving suggestions to Lord Krishna, Yashoda asked him to smear the face of Radha with any color he wanted to. Fascinated by his mother's idea, Lord Krishna did the same thing, and thus, the festival of Holi came into consideration.

From the Shubh Muhurat to celebrate Hollika Dahan in 2022 to Holika Dahan Puja timings and Bhadra, here is Holi 2022 Dates calendar:

Where is Holi Celebrated in India?

Gather Together with Your Loved Ones: Call up your gangs of the wanderers at your terrace or garden to celebrate Holi at home, followed by music, dance, and homemade food.

Dance Your Heart Out: No celebration in India is considered complete without dancing your heart out. Do the same at the Holi festival, either at your home or at the Holi event.

Smear Colors of Joy on Each Other: You must splash vibrant colors of Holi on your favorite people. Plus, fill your water balloons with different colors and let that colored water splash out. 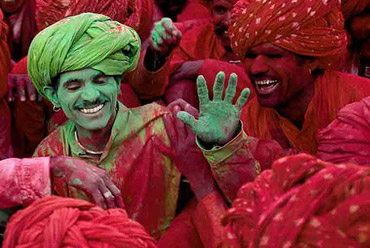