Location: All over India

Janmastami and Mathura. The combination spells magic. Janmastami celebrates the birth of the beloved Hindu god -Lord Krishna. And Mathura, the ancient north Indian town, is Krishna's birthplace, which makes it one of the most sacred and holy places in the entire country. In 2022, Janmashtami is celebrated on August 19.

Krishna the eighth of the 10 incarnations of Vishnu (the Preserver of the Universe) is one of Hinduism's most popular gods, and his story is a long rich one, which can only be very briefly outlines here. He was born at Mathura to Vasudeva and Devaki, the cousin of the ruling King Kansa. It was prophesied that Devaki's eighth son would kill Kansa. Kansa imprisoned Devaki and Vasudeva and killed her children as they were born. But Krishna was smuggled out of the prison and brought up as the child of the cowherd Nanda and his wife Yashoda at Gokul. In his childhood, the incarnate god performed many miracles, but also played childish pranks, which have been immortalized, and stories of his childhood form a part of the rich folklore of India. His flirtations with the wives and daughters of the cowherds (gopis) are legendary. But his favorite gopi was the beautiful Radha.Eventually, he gave up his idyllic pastoral life, and turned his attention to destroying his wicked uncle, Kansa. After slaying him, he founded anew capital, Dwarka, and married Rukmini, daughter of the king of Vidarbha.

Except for Dwarka, which is in Gujarat, most of Krishna's story unfolds in Mathura and its environs - Vrindavan (15 kilometer from Mathura) where he played the flute, sported with the gopis and wooed his sweetheart Radha; Goverdhan (26 kilometer away) where, as a child, he is said to have held aloft the Goverdhan mountain on his finger for seven days and nights to protect the cowherds from a deluge, Gokul (16 kilometer away) where baby Krishna was kept hidden and sheltered from the evil King Kansa by his foster mother Yashoda, Barsana (21 kilometer from Goverdhan), the birthplace of Radha and many other small towns, significant because they were in some way connected with Krishna. Not surprisingly, the entire area, called Brajbhoomi, is deeply steeped in Krishna lore. And Janmastami is celebrated in this entire area with incredible fervor and gaiety. But the place which is considered the holiest is obviously Mathura, and within Mathura too, one particular temple which is built on the exact site where Krishna was born.

Krishna was born in jail where Kansa had kept his parents, Vasudeva and Devaki imprisoned. Legend has it that when Devaki was with child, she glowed with an almost unearthly light and looked beautiful. When Krishna was born, everything was auspicious - the planets and stars were in the rivers and lakes were clear and sweet, flowers bloomed everywhere, and an air of tranquility pervaded the earth. As the newborn child came into the world, Vasudeva and Devaki looked at him in wonder. This was not an ordinary child. The Lord had appeared in his real form. Dark as a rain-cloud, the child made the prison glow with the splendor of his crown, his jewellery and his yellow silk robes. Even as they were looking on, his divine form was lost and he became an ordinary child in their eyes. Vasudeva had been commanded to take the child and leave him in Gokul, in the house of Nanda. Vasudeva placed the child in a small wicker basket and as he wondered how to get across the locked doors, not mentioning the armed guards, a miracle took place. The locks snapped open. Vasudeva walked towards the door and found that the guards were all sunk in deep sleep. He quickly walked out and reached the backs of the river Yamuna. Suddenly the sky became overcast and torrents of rain lashed the ground. Vasudeva did not know how he was going to cross the river, but, placing his faith in the Lord, he plunged into the water. But the great serpent Adhishesha, with his two thousand hoods protected the child form the rain; and the water in the river Yamuna receded to give way to Vasudeva. And so Vasudeva took Krishna to the safety of Nanda's house.

According to archaeologists and scholars, the area called Katra Keshavadeva in the old part of Mathura city is where Krishna was born. Through the centuries, temples were constructed on this site, only to be repeatedly destroyed by invading armies. In the 1940s, freedom fighter Pundit Madan Mohan Malaviya set about restoring the shrine. Today, there is a huge temple - Shri Krishna Janamabhoomi, which is the place for Janmastami celebrations.

The Celebration And Its Proceedings

Janmastami falls in the month of Bhadra (August-September), and the moment of importance is midnight when Krishna is born. People fast all day (some without even water) and eat only after the midnight birth ceremony is over. Temples and homes all over India display jhankis (tableaux) showing important incidents from the Lord's life. Often the image of the baby Krishna is placed on a swing and bathed with charanamrit (holy water). Midnight prayers are performed. The sound of hymns and religious songs extol the greatness of Krishna. While this festival is celebrated throughout the country it is in Mathura that the celebration reach their peak. The midnight ceremony is often relayed live to devotees by radio and television.

It is estimated that during Janmastami, almost seven lakh people pour into Mathura and the surrounding towns. Buses crammed with pilgrims come from every corner of the country and line every lane and road in Mathura. Every hotel, every guesthouse, is full, and if one hasn't made arrangements, one can't get a room anywhere in the city for all the money in the world. So a lot of pilgrims simply camp wherever they find place - in a park, on the pavement, even on the road! All of Mathura becomes a sort of giant living room, with people sitting, sleeping and cooking wherever they can find a square inch. They throng the temples (of which there are many in Mathura), and wander around the innumerable little bazaars that mushroom all over the city. Snack stalls, mithai (sweet) shops, tiny shacks selling trinkets and baubles, others selling religious books and cassettes, and pictures of Lord Krishna spring up magically on every road.

But what attracts the pilgrims most is the raasleelas (a kind of folk theatre which narrates the various aspects of Krishna's life). Every year, with the onset of the rainy season, the raasleelas begin. Under a huge canopy, a vast crowd (men on one side and women on the other) sits in rapt attention, watching the events unfold on the stage. There are raasleelas in every corner of the city particularly in Vrindavan. Some are staged by companies, which have been around for 50 years, some are not so old; but all of them are put up with great love and devotion by the actors and musicians, and are watched by an equally devout audience. In fact, while watching the raasleelas the audience periodically breaks out into the resounding cry, Krishna bhagwan ki jai! (Hail Lord Krishna). The raasleelas are always put up on a stage blazing with light and color. Huge sheets of silk in bright colors (red, blue, yellow) embellished with sequins and gold work form much of the backdrop. The raasleelas are usually in brajbhasha, the dialect of the region, but once in a way, the actors improvise and break into Hindi. The musicians sit in one corner of the stage, singing with the barest accompaniment - just a harmonium and a tabla. The most interesting aspect of the raasleelas is the fact that Krishna is always played by a young boy, never a grown up man, and when the show ends, the people quietly queue up to go onstage and offer their prayers to Lord Krishna. Reverentially, they touch the little boy's feet, and drop their offerings in a big urn placed next to him. Because, for the devotees, the young boy playing Krishna is not human at that time - he is a manifestation of Lord himself.

But the real crowds during Janmastami, of course, are at the Shri Krishna Janamabhoomi temple. Hundreds and hundreds of pilgrims squat on every inch of the temple grounds, fanning themselves with newspapers and listening in pin-drop silence to the discourses of erudite religious teachers - discourses relayed through a close circuit television network to every corner of the temple. Many people simply camp in the temple all day so that they can witness the midnight birth ceremony. And as night falls, the crowds swell into the proverbial sea of humanity, jostling and pushing, in an attempt to get into the temple. The main hall of the temple, where the ceremony actually takes place, is usually so tightly packed with people that there isn't place to even squeeze in a pin! As twelve o'clock draws nearer, an anticipatory murmur runs through the crowd and it starts straining to get a glimpse of what the priests are doing. At the stroke of midnight, when the deity is taken out, the crowd lets out a mighty roar, Krishna bhagwan ki jai! The sound of frenzied clapping, the call of the conch shell rents the air, as the small deity, wrapped in white, is placed on a raised platform so that everyone can get a look.

The ceremony that follows is a very simple affair. To the chanting of mantras, the priests bathe the idol with gangajal (water from the holy Ganges river), milk, ghee (clarified butter), oil and honey. All these are poured from a conch shell by yellow robed priests. Once the ceremony is over, it's time for devotees to break their daylong fast and also to pack their bags and head homeward - till the next Janmastami! Janmastami is celebrated on the eighth day of the new moon in the lunar month of Bhadra corresponding to the months of August-September of the western calendar. 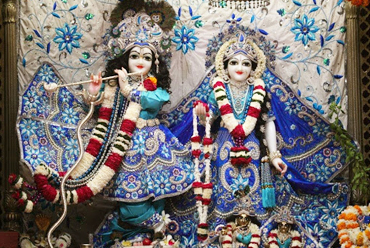