Of all the places of interest around the country, the Northeast is perhaps the least publicized. And among the Seven Sisters of this region-Assam, Nagaland, Manipur, Meghalaya, Arunachal Pradesh, Mizoram and Tripura-the last is the least known, in spite of the state's richness in terms of beautiful scenery, virgin forests and lush valleys, exquisite craft traditions and a colorful cultural-historical heritage.

Part of the reason for theobscurity of the state of Tripura lies in its being a "corner within a corner," tucked away behind the borders of Bangladesh. The other contributing factor has been that Tripura was always a princely state ruled by a Maharaja until the time of independence and never came under British supervision. This meant that it did not become 'fashionable' as a winter resort like Shillong (in Meghalaya) and Shimla (in Himachal Pradesh) became. Yet, this tiny state-the smallest in terms of area, among the seven sisters-can lay claim to a variety of attractions in terms of archeological importance, religious significance, folk and tribal culture and ethnic artifacts.

Situated on the extreme corner of the Indian subcontinent, Tripura has Bangladesh as its border on its north, west and south. Assam and Mizoram border the eastern part of the state.

Tripura's physical feature differs from the north to south. It is a land of high hills, hillocks, and interspersed with river valleys. On its north, it has four valleys that have been separated by hills with heights of about 1,000 meters. On its south, it has open forested land spread over a wide range of area.

The climate of the state is hot in summers and cold in winters with the temperatures ranging from 35°C to 10°C. Tripura receives an average rainfall of 2,100 mm.

Flora & Fauna - Due to the sufficient and well-distributed rainfall, the state has an ideal composition of land mass and water that houses a large variety of flora and fauna here. A wide variety of plant and orchid species are found in the forests of Tripura. Sal (Shorea robusta) is an important product of the forests here.

The history of the place starts from the days of the great epic Mahabharata. It was ruled by the Manikya dynasty from the 14th century. The Manikyas, who supposedly belonged to the Indo-Mongolian group, ruled over this area independently even at the time when most parts of the Indian subcontinent were under British rule. The rulers of the state had a good relation with the British during that time and the later helped Tripura to protect itself from the Nawabs of Bengal to take over the state. After the independence of India, an agreement to merge Tripura with the Indian Union was signed by the Regent Maharani on September 9, 1947. This state became a union territory of the country without legislature from November 1, 1956 and a ministry was formed on July 1, 1963. On January 21, 1972, Tripura got its statehood. Accessing Tripura was difficult until when Maharaja Bir Bikram made an airport in Agartala. Rabindranath Tagore is said to have had a very deep touch with this state. The two famous novels by the Nobel laureate, namely, the Visarjan and Rajasri were based on the legends of the Manikyas.

There are community-specific festivals in Tripura observed with the related rituals and festivities. The Mog community observes the Way (Lamp) Festival from the full moon of Ashad to the full moon of Ashwin. The Ashokastami, Garia, and Gajan festivals are celebrated in April. Moreover, there are the Rabindra and Nazrul Jayanti, Boat Race festival, Kharchi, Manasa Mangal, Durga Puja, Diwali, Ras, Poush Sankranti Mela and Orange and Tourism Festival that are celebrated throughout the state with great fervor.

How to Reach Tripura

Tripura has only one airport at Agartala that connects the place with Guwahati and Calcutta.

Tripura has no railheads inside the state. The nearest railheads are at Kumarghat (140 km from Agartala) and Silchar (180 km) in Assam.

The National Highway 44 connects most of the places of Tripura via Shillong. The state transport corporation and private tour operators run regular buses that connect the state with the nearby towns and cities both within and outside the state.

Moreover, there are the Buddhist monasteries in Agartala, Pecharthal, Kanchanpur, Manu Bakul, Pilak, and Boxnagar.

Sightseeing & Things To Do in Tripura 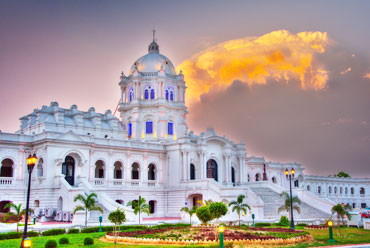