Home to one of the 12 Jyotirlings of India, the temple city of Somnath or Prabhas Patan is situated in the state of gujarat on the Arabian Sea. The place extends from latitude 21° 04' in the north to longitude 70° 26' in the east.

The climate of Somnath is mild with the temperature ranging between 20°C and 28°C in the winters and between 28°C and 34°C in the summers. One can visit the place round the year but the best season to visit is winters-from October to March.

It is said that the original temple of Somnath was built by the Moon God and was made of gold. After it was razed to the ground, it was rebuilt with silver by Ravana. When the silver temple was knocked down, it was reconstructed in wood by Krishna. And when this was pulled down, an edifice of stone was erected by Bhimdev.

This is the first among the twelve Jyotirlings. Since ancient times, Prabhas Patan has been a pilgrimage, being the confluence of the mythological Saraswati, Hiranya and Kapila. Legend has it that Lord Shiva's Kalbhairav linga is situated at Prabhas. It is also associated with the moon as the Moon God is also said to have worshipped this Shivling. This is also the reason why this temple is popularly known as Somnath, the one named after the moon.

Remains found from the region and descriptions in the writings of Indians and foreigners suggest that the place was a colony of the Aryans in the ancient times. This temple of religious as well as historical significance is believed to have been built sometime around AD 4. In AD 1026, Mahmud of Ghazni first looted the temple, and then came Afzal Khan, the commander of Ala-ud-din Khilji and later Aurangzeb. It is said that the temple was looted and destroyed as many as seventeen times.

The Iron man of India, Sardar Vallabhbhai Patel was instrumental in the construction of the present temple, an edifice reminding visitors of the splendor of the original Somnath temple. Renowned temple architect Prabhaschandar designed it and the first President of India Dr. Rajendra Prasad installed the Jyotirling in the new temple on May 11, 1951.

The present temple, Kailash Mahameru Prasad is built in the Chalukya style of temple architecture and reflects the inherent skill of sompuras, Gujarat's master masons. It has the shikhara, the Garbhagriha, the sabha mandap and the nritya mandap. It has been built in such a position that there is no land between the Somnath temple and Antarctica. This fact finds mention in the inscription found on the protection wall of the temple.

The museum at Somnath houses the remains of the earlier temples but in the form of a clutter of old carved stones littering a courtyard. It also houses pottery shards, a seashell collection, a glass case of water bottles containing samples from the rivers Danube, Nile, St Lawrence, Tigris, Plate, Murray, and seawater from Tasmania, and New Zealand.

The Bhalka Tirth is the place where Lord Krishna was mistaken for a deer and wounded by an arrow while sleeping in a deerskin. The place is situated on the confluence of three rivers. There is a sun temple (Suraj Mandir) nearby that was also knocked down by Mahmud of Ghazni.The Junagarh Gate is a very ancient triple gate that Mahmud of Ghazni broke through to take the town. The Mai Puri was once a Sun temple but was later converted into a mosque during Mahmud of Ghazni's time. The Ahilyabai Temple was built as a substitute for the original Somnath Temple. Just behind the temple is the Somnath beach with pleasant sands, great sea view, camel and pony rides, coconut stalls, and snack shops. Other places of interest are Jama Masjid, Bhidiyo Pagoda, and several smaller temples.

The Gir National Park is the last home of the Asiatic Lion and is situated around 43 km off Somnath. This 1400 sq km sanctuary was set up to protect the lions whose numbers at one point had come down to less than 200. Now the number is believed to have reached around 285 at the last count. Chorwad is a new beach resort developed by the Tourism Corporation of Gujarat at a distance of around 26 km from Somnath. Veraval is a major fishing port and a base point for the visit to Somnath.

Somnath celebrates a large fair on the day of the full moon of Kartik Purnima in November/December. Maha Shivratri in the month of March is also a major festival here.

By Air - The nearest airport from Somnath is Keshod 55 km away and linked to Mumbai. There are regular buses and taxis plying between Keshod and Somnath.

By Rail - The nearest railhead is seven km away at Veraval, which is connected by train to Ahmedabad and some other cities in gujarat.

By Road - State transport corporation buses and private coaches run regular service to other cities in the region. Somnath is connected by a good road network to the other nearby places like Veraval 7 km, Mumbai 889 km, Ahmedabad 400 km, Bhavnagar 266 km, Junagarh 85 km, and Porbandar 122 km. 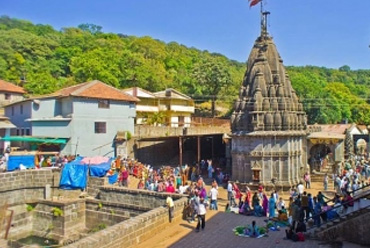