Tashiding Gompa is significant religious place to visit in North East India. The popular monastery is located in the mountainous state of Sikkim, India. Approximately 40 km from Geyzing, Tashiding Monastery is connected by regular buses or taxis from the town. The monastery is located with an amazing backdrop. Dominated by the snow covered Mt. Kanchenjunga, the monastery is perched on a heart-shaped hill overlooking Rathong River and the Rangit River. The monastery dates back to 1717 when by Ngadak Sempa Chembo (one of the three Lamas who performed the consecration ceremony of the first Chogyal) laid the foundation stone of the monastery.

The Tashiding Monastery belongs to the Nyingmapa order. The monastery has been recently re-constructed. There is a holy chorten (stupa) known as 'Thong-Wa-rang-Dol' that translated into the local language means 'Saviors by mere sight'. It is believed that a mere glimpse of the monastery’s stupa washes away one's sins. As per the Buddhist scriptures, Guru Padma Sambhava (usually known as Guru Rimpocha) blessed the lands in the 8th century and his divine powers are till date felt by the devotees. The colorful flags, fluttering in the air, create a divine effect in the monastery complex. Visitors are left in awe of the bliss of the monastery.

There are 41 chortens in the Tashiding Monastery, each having its own divine roots. In the monastery, view the 'manis' (stone plates) that are engraved with holy Buddhist mantras and inscriptions of "Om Mane Padme Hum". The main sanctum sanctorum stands surrounded by old edifices, stupas and stone plates.

Tashiding Monastery is very famous for its celebration of Bumchu. The unique festival draws visitors and Buddhist devotees in huge numbers. Every year in February the monastery celebrates the grand festival started by Guru Padma Sambhava himself. The holy lamas open a sacred pot containing holy water and make important predictions by studying the level and quantity of water within.

The divine aura of Tashiding Monastery allure people to come here from all over the world. 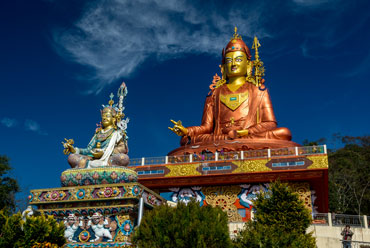