Sahelion ki Bari or the Garden of the Maids of Honour is a well-maintained lush garden that was erected in 1710-1734 by Maharana Sangram Singh II for the 48 attendants which he had received as a part of the dowry. Just outside the old Udaipur city, the garden boasts of peaceful surroundings, fountains, marble art and green lawns. It is believed that the king himself designed the garden as a gift for his Queen. One of the most popular attractions of Udaipur, this garden has white marble Chhatri fountain right in the center and black-colored marble Chhatri on the corners. The terrace of the cenotaphs have fountains in different shapes such as birds with beaks sprinkling water.

The beauty lies outside the courtyard of Sahelion ki Bari, an area that is dotted with trees, flowers, a pool in the shape of lotus, lawns and fountains made from cast iron. These special fountains were made in England. After a few years of the establishment of Maharana Bhopal Singh got these fountains from there, and erected a rain fountain pavilion in 1889. These huge circular-shaped fountains pool has ornamentation with marble elephant figurines. The garden is a wonderful amalgam of Indian and English style of architectures.

The garden is placed on the banks of Fateh Sagar Lake. During the rule of Maharana Fateh Singh, there was flood in the lake and a part of the garden got damaged, which was later restored by the ruler. In one of the garden is a well-stocked museum that consists of stuffed cobras and other animals. 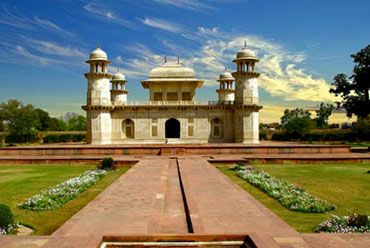