Rajasthan is a desert state in India with its 60% of its land dominated by the Thar Desert. The Rajasthan desert safari takes the travelers to the golden sand dunes located in the heart of the vast Great Indian Desert. During this 5 days tour, you will visit the famous cities of Jodhpur and Jaisalmer in Rajasthan. Both the cities are historically significant places and have many beautiful forts, palaces, temples, and Havelis. Enjoy a camel ride, folk music, and authentic Rajasthani food at the Sam sand dunes. Also, soak in the charm of desert life and vivid culture of Rajasthan during the tour.

Upon your arrival in Jodhpur railway station/airport you will be greeted by our tour representative who will drop you at your pre-booked hotel. Complete the check-in formalities and take some rest. You can wander around the nearby streets filled with colorful shops and food joints. You can also ride on a Tonga (horse cart) which is a fun option to explore the city that once ruled by various kings. The evening is scheduled for visiting the Mandore gardens and Balsamand Lake.

Mandore is a place that dates back to the 6th century and was the capital of Marwar before Jodhpur was established. The Mandore garden is a beautiful place that attracts tourists with a number of monuments, ancient temples, and several gardens. Visit the hall of heroes that showcases the stone-carved statues of the folk heroes and several deities. The garden also includes a temple of 33 crores Hindu Gods and Goddesses. Admire the architectural beauty of the temples and monuments and also enjoy a panoramic view of the ruins of the ancient palaces from the hilltop.

Balsamand Lake is a popular picnic spot located at a distance of 5 Km from Jodhpur. You can visit the lake on your way back from Mandore as you will pass by it. The 1 Km long lake was built in 1159 AD by Balak Rao Parihar. The lake is surrounded by various fruit trees like papaya, mango, plum, pomegranate, guava, and others that invite the jackals, peacocks, and monkeys to the garden. Return to the hotel for an overnight stay in Jodhpur.

On the second day of desert safari Rajasthan Jodhpur, after breakfast you will head out for Jodhpur city sightseeing. You will visit Mehrangarh fort, Umaid Bhavan Palace, Ghanta Ghar or clock tower all of which are the famous attractions in Jodhpur.

The Mehrangarh Fort is the perfect site for history buffs. Located at a height of 410 feet on a hilltop, the fort is protected by a thick wall. There are a number of beautiful palaces inside the fort and all have a separate identity. There is also a museum in the fort that has a collection of musical instruments, palanquins, furniture, and cannons. The fort became internationally famous after the movie "The Dark Knight Rises" was shot here. The red stone-built fort impresses the visitors with intricate carvings on the walls and the grandeur of the palaces.

On the left side of the Mehrangarh fort is situated the Jaswant Thada mausoleum, a spectacular marble structure above a small lake. This monument is known as the Taj Mahal of Marwar, for its beautifully intricate carvings. This is a serene place built in the year 1899 A.D. in memory of Rathore ruler Maharaja Jaswant Singh II.

Also, visit the Rao Jodha Desert Rock Park near the fort. The park was created in 2006 to encourage the greenery around it and restore the ecology of the rocky area.

Umaid Bhavan Palace reflects the luxury of the royal life. The palace was built in the name of late Maharaja Umaid Singh and a part of the palace has now been transferred to the Taj group. The beautiful palace includes a museum that displays royal clocks, vintage cars, and other items.

Thereafter, you can visit attractions like the Kaylana Lake, and Phool Mahal. Both are famous for their unique beauty. Kaylana is an artificial lake built by Pratap Singh in 1872. During winter you can spot the Siberian cranes on the lakeside. Next, you can visit the Phool Mahal Palace. This palace turned heritage hotel is one of the major attractions of the city.

In the evening stroll around the clock tower market. Here a clock tower was built by Maharaja Sardar Singh after which the market is named. The market offers an exciting shopping experience where you can purchase spices, clothes, glass bangles, hand-embroidered fabrics, handicrafts, cooking utensils, etc. Return to the hotel for an overnight stay in Jodhpur.

On the third day of the Jaisalmer desert safari, you will check out from the hotel and head to the Jodhpur Railway station. Board your train to Jaisalmer and once you reach there, check-in at the hotel and freshen-up. Have your lunch and take rest to get over the tiredness of the 5-hour train journey. Thereafter, get ready for a thrill-filled evening in the Sam sand dunes. It takes about 30 minutes to reach Sam by car. If you want to enjoy the real essence of the desert, then take a camel ride to reach the place. The real fun starts when the sun disappears behind the vast desert and the flame of the campfire starts burning to the tune of folk music. Take your place along with others and soak in the magic of Jaisalmer night safari while relishing authentic Rajasthani Dal Bati Churma. Back to the hotel for an overnight stay in Jaisalmer.

After the last night's enjoyment in the Thar Desert in Jaisalmer, today you will be exploring the yellow stone palaces and Havelis in the golden city of India.

You will visit Jaisalmer Fort, Salim Singh Ki Haveli- a beautiful 300 years old mansion, Patwon Ki Haveli, a 5-story mansion which is one of its kind in the city, Gadi Sagar tank, an oasis, and the Heritage Museum.

Jaisalmer Fort is also known as Golden Fort or (Sonar Qila as famed by the Satyajit Roy Movie) due to its unexplainable grandeur. The yellow sandstone that the fort is built of glitter like gold in the sunshine. Located at a distance 1.5 Km from the center of Jaisalmer city, the fort is nestled atop the Trikuta Hill. It was built in 1156 AD by the Bhati Rajput ruler Maharawal Jaisal Singh which is now a World Heritage Site. The awe-inspiring fort has a number of palaces decorated with enthralling carvings and sculptures. The most beautiful palace is the Maharawal Palace popular for its marble throne. Also visit the museum in the fort which showcases the glory of the Rajput kingdom like arms, dresses, utensils, & ornaments. The Jaisalmer Fort is known as one of the most beautiful and glorious forts in the world.

After exploring the historical attractions, you can also take a tour of the spiritual site in the fort. Visit the Jain temples that are the oldest temples in Jaisalmer.

Salim Singh was the prime minister of the then kingdom of Jaisalmer. The palace named after him is situated near the Jaisalmer Fort. It is also known as the Jahaz Mahal, because of its front facet looking like the stern of a ship. The palace attracts the tourists with its beautifully carved roof and the imperial paintings on the wall. The mansion initially had the same height as the palace of the king but the king didn't take it positively and demolished the upper two floors.

Within 500 meters of Jaisalmer Fort, is situated the Patwon Ki Haveli in a narrow lane. This is the oldest fort in Jaisalmer constructed by Guman Chand Patwa, a rich merchant. It is a combination of five separate Havelis that he built for his five sons and all are attractive for the intricate designs and painting on the wall. One of the Havelis has turned into an archeological museum that showcases a vast collection of antique furniture, decorative goods and traditional art items created by the locals.

The artificial water reservoir Gadi Sagar tank is situated at a distance of 1.5 Km from the Fort. Constructed by Raja Rawal Jaisal, the lake was initially a rainwater reservoir that now receives water from the Indira Gandhi Canal throughout the year. You can spot the migrated birds on the lakeside and also visit the temples that surround the lake.

You can also visit the Bada Bag or Big Garden, a historical site in Jaisalmer. It is not a garden of trees or plans but a number of cenotaphs or chhatris of the royal family are located here. Each cenotaph built in the memory of the kings and the queens is inscribed with the name of the person.

After breakfast, you will be checking out from your hotel and will be dropped at the railway station/airport to catch your train/plane back home. 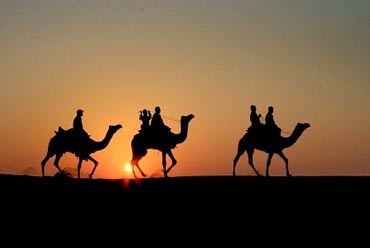 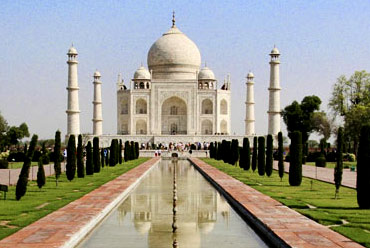 Rajasthan With Taj And Ganges

Price:Price On Request
explore this tour ›
Get Updates & More