The word Manipur literally means a 'jeweled town', a name that rightly justifies the small and picturesque land. The people here are very polite and hospitable. Rich in its culture, tradition, and ethnicity, Manipur is one of the seven northeastern states of India. The Raasleelas and the classical dance of Manipur hold a very significant position in the cultural map of India. With sites like the Loktak Lake and the Khonghampat Orchidarium, Manipur is also famous for its natural beauty.

Manipur is situated in the northeastern part of India. Manipur is bordered on its north by Nagaland; on its east lies Myanmar (Burma). The southern part is bordered by the state of Mizoram, while the green valleys of Assam bound the western part.

Manipur has a low-lying basin in its center surrounded by high-range mountains that sometimes reach up to a height of about 2000 meters.

Manipur always used to be independent of its neighboring tribal areas. Though often invaded by Burma, the state usually enjoyed long and stable governments for a good time. Manipur became a part of British India following the Yandaboo treaty with the East India Company in 1826. This treaty was an agreement at the end of the Indo-Burmese war that established the sovereignty of the British government. During the World War II, the Japanese forces marched to Manipur. It was given the status of a full-fledged state in 1972.

The festivals of Manipur hold special importance to the people of the state. Most of their festivals are characterized by traditional dance and music along with some traditional refreshment. Yaosang is a festival celebrated on the full-moon day of February/March. This festival is also regarded as the festival to welcome spring season. Moreover, there are festivals like the Manipuri New Year celebration known as the Cheirouba and the festival to reassure the loving relationship of the siblings known as Ningol Chakaouba. Kut is another festival that marks the harvesting season in Manipur. Feasts, traditional drinks, and merrymaking characterize the festival.

The capital of Manipur, Imphal, is well connected with the rest of the country by air. Imphal connects the place with Guwahati, Delhi, and Calcutta.

As Manipur has no railway network, the nearest railhead to reach Manipur is Silchar in Assam.

Manipur is well linked with the rest of the country by both national and state highways. The state transport corporation plies regular scheduled buses from Imphal to the other cities in the region.

Manipur has a lot to offer to the tourists visiting this state. Some of the places worth visiting are the Shree Govindajee Temple (a pilgrimage as well as historic center of the Vaishnavite), Kaina (a sacred place of Hindus), Khwairamand Bazaar (a market place run by women), Manipur Zoological Garden (renowned for the rare sangai deer), apart from the beautiful Loktak Lake and Sendra Island. Besides, Langthabal (historic sites), Moirang, Moreh, Phubala, Singda, Khongjom, Sahid Mandir, Khonghampat Orchidarium, Keibul Lamjao National Park, Sekta Archeological Living Museum, and the Manipur State Museum are surely worth a visit. 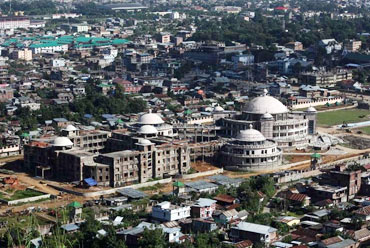 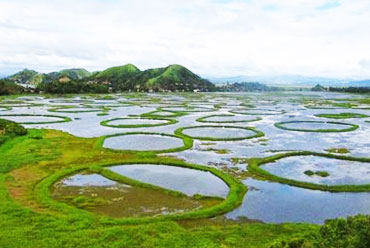