Overlooking the beautiful Maota Lake is the fort-Palace complex, Amber Fort, also known as Amer Fort. Located at the outskirts of the city (11 km away), Amber Fort is well-known for the grandeur it features and is an integral part of the city. Featuring an amalgam of Hindu and Muslim architectural styles, Amber Fort leaves every visitor mesmerized. When you are in Jaipur, you really can’t miss visiting this magnificent Fort. Also, the fort offers spectacular views of the city from the top.

While the attractions of this fort are many, the most alluring attraction is the elephant ride upto the fort’s entrance. Sitting on an elephant’s back, you will surely take back a unique royal experience. If you opt for an elephant ride or if you cover the path by walking, you enter the complex from Suraj Pol or Sun Gate that leads you to the Main Courtyard or Jaleb Chowk. This was the place where the army of the ruler used to showcase the war booty to the public. You can find the ticket office across Suraj Pol. The other option to cover this area is on a jeep. In case you enter the complex in a car, you enter through Moon Gate or Chand Pol, opposite Main Courtyard.  Light and sound show organized every evening in the fort complex is a major crowd puller.

Maan Singh was one of the trustworthy generals and first war chiefs of the Mughal Emperor Akbar. The Emperor also included him in his list of the ‘Navaratnas’ (Nine Jewels) of his court.

On Delhi-Jaipur Highway, 11 km from the city centre

Built in the year 1592, the fort is one of the most popular forts in Rajasthan, known for its massive architecture. Famed for its artistic architectural style, it comprises of a blend of both Hindu and Rajput features. Overlooking Lake Maota that is right in its front, the fort consists of cobbled pathways, various gates and huge fortifications. The fort has stairways, courtyards, gateways and balconies in its premises. Sheesh Mahal, Sila Devi Temple, Sukh Mandir, Bhool Bhulaiya, Suhag Mandir, Jaleb Chowk, Ganesh Pol, Lion Gate, Tripolia Gate, Jai Mandir are some the major attractions of the fort. It has been built in pale yellow and pink sandstone including white marble.

The star attraction of the fort is the Mughal style gardens, known as Dil-e-Aaram and Diwan-e-Aam. As you enter the fort through the 'Dil-e-Aaram' Garden, you would get awestruck by with traditional Mughal style of gardens. A beautiful flight of stairs takes you to 'Diwan-e-Am' (hall of public audience), which is known for its intricately decorated galleries.

The walls of the fort feature paintings of hunting and war. These paintings are adorned with mirrors and precious stones. The front view of the Maota Lake adds to its beauty and makes the ambiance more spectacular. The reflection of the magnificent Amer Fort on the placid waters of the lake will surely leave you spellbound.

The regal feel of the fort is enunciated equally well by the exteriors and the interiors of the fort. The complex of Amber Fort consists of a number of important structures. Step up from stairway of Jalebi Chowk and you are in the main palace area. On the right side is Siladevi Temple, that has stunning silver doors with raised relief work. When you get back to the main staircase you will reach the second courtyard that has Diwan-i-Aam.

The third courtyard had the apartments of the Maharaja. Make an entry from Ganesh Pol that is festooned with attractive frescoed arches. Hall of Victory or Jai Mandir has multi-mirrored ceiling and in-laid panels with marble carvings. Opposite this hall is Sukh Niwas or Hall of Pleasure.

The women’s quarters or Zenana were surroundings of the 4th courtyard. The rooms of the queens were built in such a manner that the king could visit any queen without the knowledge of the other queens. The queen chambers though were independent but the opened into the same corridor.

Diwan-e-Khas or the Hall of Private Audience has stunning mosaic work in glass on the walls. This hall was used by the ruler to have a meeting with his special guests such as people who visited from other states, his friends and ministers.

Diwan-e-Aam or the Hall of Public Audience is another striking hall that stands tall on 2 decorated pills and that opens from 3 sides. The top of these columns have elephant shaped structure and galleries with lattice work. This was the place where the general public assembled in front of the King and he used to listen to the complaints of his people and their needs.

Located right opposite Diwan-e-Khas, Sukh Niwas is an amazing structure that has huge doors that are made up of ivory and sandal wood. A channel carrying cold water used to run from this hall and when the air used to brush past the channel, it would cool breeze to the people standing there. The room was kept cool by using this technique. Sukh Niwaas was the place where the Kings used to spend quality time with their queens or mistresses. For the same reason, the English translation of this place is called the Residence of Pleasure.

Sheesh Mahal or the Mirror Palace can boast of being the star attraction of Amer Fort. The ceiling and the walls of this hall are encrusted with innumerable pieces of mirrors and you can even spot stunning floral paintings on them. It is said that the king ordered the construction of this hall as his queen loved the shining stars but she was not allowed to sleep on open air. When candles were lit in the room at night, their reflection showed in the mirrors and it looked like the ceiling mirrors were stars. One of the songs of popular Bollywood movie Mughal-E-Azam, ‘pyar kiya toh darna kya’ was shot here in Sheesh Mahal.

Mughal Garden is a beautiful garden of Amer fort. This beautiful garden has flower beds in shape of stars that had saffron flowers. The English translation of the garden’s name is ‘Saffron Garden’.

From the month of October to February

Sightseeing & Things To Do in Jaipur 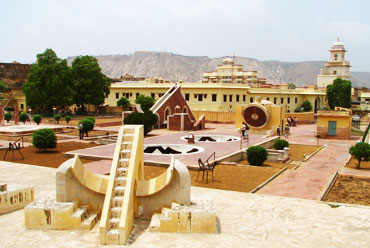