Location: All over Orissa, mainly Puri

One of the four most famous holy pilgrimages of the Hindus in India is the Jagannath Temple of Puri. The festival of Rath Yatra celebrated here, is world famous for the enormous crowd of devotees that gathers to witness Lord Jagannath's yearly journey in his huge chariot. Perhaps the only deity to be brought out of the temple every year, Lord Jagannath, with his brother Balabhadra and sister Subhadra, goes to his garden house for five days, visiting his aunt on the way. At the end of the five days, the three siblings are brought back to the Jagannath temple in a procession called the Ultarath.

As the preparations for the procession begin, all routine activity in the town comes to a standstill. The temple kitchen - the largest in the world - serves more than 75 quintals of rice everyday along with 55 other dishes. These are offered to the gods in the temple and later distributed as Mahaprasad to the devotees.

Time of The Year

Every year in July, the sacred coastal town of Puri comes alive to celebrate the Rath Yatra of Lord Jagannath, one of the biggest festivals during the monsoon season. According to the Indian solar calendar, it falls two days after the new moon day of the month of Asadh.

Amidst the resounding clash of cymbals, and the tumultuous thundering of drums, the three gods, Jagannath, his brother Balabhadra and sister Subhadra leave their abode, the Jagannath temple, to journey to the Gundicha Mandir, three kilometers away. Millions of devotees flock to the town to watch the trinity ride in their elaborate chariots through the streets of Puri. On all auspicious occasions, special ceremonies and rituals are performed replete with pomp and splendor in the temples of Puri, but nothing matches that of the Rath Yatra.

Since the portals of the Jagannath temple allow entry only to Hindus, one of the gods, Maitri Devta, who symbolizes universal brotherhood, steps outside during this time so people of all religions and castes can pay obeisance. A spiritual ambience pervades the whole scene as bells chime; conch shells blow and the saffron robed sadhus dance with abandon. It is fascinating to watch the delirious masses paying homage to the Lord as the chariots move on almost as if propelled by a divine force.

A fortnight before the Rath Yatra, the three deities are given a holy bath on an open platform - the Snana Vedi. Since the images become discolored as a result of the bath, they are kept away from the public. At this time, the deities are said to be ill and are left to rest in isolation.

A day before the procession, three gigantic chariots are exquisitely decorated and lined up outside the temple gates. Lord Jagannath's chariot, the red and yellow Nandighosh, is about 45 feet in height with 16 massive wheels and a gold dome on top. The red and green Taladhwaj is only slightly smaller and belongs to Balabhadra. The smallest, Dev Datan belongs to Subhadra, who travels between the chariots of her two brothers. These grandiose structures, with brightly colored canopied tops, resemble the 12th century Jagannath temple in shape. Embellished and decorated with tinsel and ancient accessories, each of the chariots has a large platform covered with huge flower umbrellas.

On the morning of the Yatra, the rhythmic clang of metal gongs, blowing of conch shells and trumpets, and chanting of holy men fill the air as priests called Daityas bring out the bedecked idols to their raths. Lord Jagannath makes his appearance first, amidst ecstatic cries of 'Jai Jagannath'. The overwhelmed jubilant crowds work themselves into a state of devotional frenzy, as if hypnotized by the large eyes of their beloved Lord.

The procession then awaits the arrival of the Gajapati or the King of Puri. The king comes in a traditional palanquin, following a procession of decorated elephants and horses. The King of Puri is a descendant of the royal family of Orissa and has complete control over the management and property of the Jagannath temple.

He performs the Chhera Paharna, to express his humility before God. He sweeps the chariots with a gold broom and sprinkles holy water on them. There is a deafening roar of cheer as the procession inches ahead. Balabhadra the eldest brother takes the lead followed by Subhadra and Jagannath. The chariots are drawn by 50-metre long ropes attached to their front. Devotees surge ahead for an opportunity to give a hand in pulling the ropes, as it is believed that this will absolve them of all their sins and help them attain salvation.One of the unique rituals of this procession is the Lord's visit to his aunt's house. It is said that the three siblings do not like visiting their aunt who is said to be mean. However, the three go to the mashibari after being ritually scolded by the head priest.

According to tradition and folklore, the origin of the Jagannath cult is tribal, where the god was symbolized as a log of wood signifying growth, procreation and tolerance. The Vedic period saw him emerge with a wooden stump-like structure for a body and large round eyes representing the sun and the moon- the ultimate sources of life and light. Even today the mystique of Jagannath lies in its shape. It is portrayed as a stumpy body with large prominent eyes on a shield-like face.

There is an interesting story about how Lord Jagannath, one of the various forms of Krishna, came to take this shape. The image of Lord Jagannath is said to have been created by Vishwakarma himself. Commissioned by Lord Vishnu to create this idol, Vishwakarma promised he would dazzle the gods by his creation but only if he was able to work alone unseen. Many months passed. Getting impatient, Lord Vishnu forced open the doors. The image was ready but the arms were incomplete. Even today Lord Jagannath stands in the temple with two stumps for arms.

Many believe that dying under the wheels of the chariot of Lord Jagannath would give them instant Moksh. Even today, the police keep an eye for those wanting to take this route to salvation. Tracing its origin to this belief is the English word juggernaut, which denotes a huge vehicle that would crush anything that comes in its way. However, the name Jagannath, from which juggernaut has been derived, means 'the Lord of the world'.

Though this festival time is very special in India, the main Rath Yatra takes place in the holy town of Puri. At other places, those devotees of Lord Jagannath, who cannot make it to Puri, take out similar processions on a much smaller scale. Notable are the ones at Ramnagar (near Varanasi), Serampore (near Calcutta) and Jagannathpur (near Ranchi).

Without doubt, the best place to visit during this festival time is Puri, situated a few kilometers away from Bhubaneshwar, the capital of the state of Orissa. 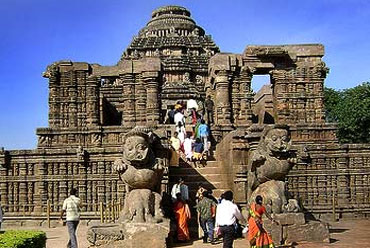 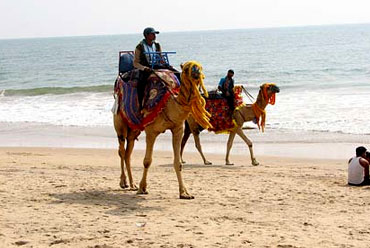 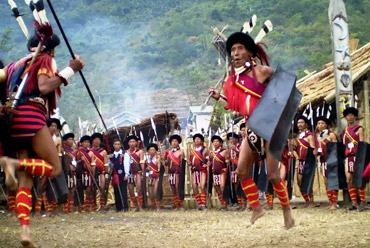