The Khajuraho Dance Festival is the celebration of the Indian traditional dance forms. Classical Indian dance originated in the ancient temples. The intriguing temples of Khajuraho have a mesmerizing association with dance as the art form has been glamorized and immortal in the exquisite stone carvings here. Khajuraho temples therefore serves as the idyllic backdrop of the art genre. As the hard winters make for warm spring, the Khajuraho Dance Festival is organized. Audiences from all over the world are drawn to the cultural extravaganza of Indian classical dance forms, music and art. Celebrate the art of dance against the backdrop of the UNESCO World Heritage Site of Khajuraho.

Khajuraho is one of the intriguing temple sites in India. The temple have an awe-inspiring association with classical dance forms. The temples of the historic date back to the 10-12th century to the rule of Rajput Chandela Dynasty. These exquisite temples were built around for 200 years. The temples are a treasure of carvings. The carved art ranges from day to day lifestyle to karmic sexual activities. Dance forms have been magnificently portrayed in the carvings. The once powerful centre of Indian culture and traditions had been lost in changing times before being rediscovered recently. Now, Khajuraho draws tourists from all over the world.

Dance is a celebrated art in Hindu Mythology. In the olden times, the temples were the centre for the art of dance. Hindu myths have various tales of great dancers. The most legendary dance pieces are Shiva's cosmic dance, Tandava, Lord Krishna’s Raas Leela with the gopis (female partners) and the mesmerizing pieces of fabled apsaras (heavenly beautiful women) such as Menaka, Urvashu and Rambha. The Khajuraho Dance Festival was started in 2002. The traditions paying tribute to classical dance, music and art of India were rekindled in the form of the festival.

The Kala Parishad under the Madhya Pradesh government organizes the Khajuraho Dance festival. The celebration brings together many popular classical dancers from all over India. The dance performances comprise intricate foot skills of Kathak, cultured Bharathnatyam, poetic temple dance of Odissi, dance dramas of Kuchipudi and Manipuri and the Kathakali stage fights with elaborate masks. The performances are accompanied by the melodious strains of the flute and tanpura, rhythms of beats of the mridangam and tabla echoed by the ghungroo of dancers. The event is held at open air auditoriums in two of the most popular temples of Khajuraho, the Chitragupta and Vishwanatha Temple.

Khajuraho Dance Festival apart from displaying dance forms gives homage to the numerous unnamed artisans who brought to life the exquisite carvings of Khajuraho. The immortalized carvings are a remembrance to the heritage that withstood the ravages of time. The glory of the art still shines through and draws visitors from all over the globe.

By Air: Khajuraho city is connected by air. The city has a domestic airport, 12 km from the UNESCO World Heritage site. Buses, taxis and cabs frequent the world heritage site from the air terminal.

By Rail: Khajuraho city has its own railway station. The rail terminal is located in the heart of the city. Buses, taxis and cabs are available from the train station.

By Road: Khajuraho enjoys smooth connectivity by roads to cities in Madhya Pradesh and all over India. State owned buses, ac and non ac taxis and private vehicles commute to the city.

Before you attend the Khajuraho Dance Festival make plans for stay in the city. Choose from our collection of comfy and luxury hotels in Khajuraho. Indulge in the cultural presentation of dance, music and art in the starry evenings. Also check out Madhya Pradesh Tour Packages which also cover the intriguing UNESCO World Heritage Site of Khajuraho, Bhimbetka and Sanchi. The cities of Bhopal, Gwalior, Indore, Ujjain, Omkareshwar and Orchha are also intriguing to sightsee. Bandhavgarh National Park and Kanha Tiger Reserve are popular locales for nature outings and adventures. 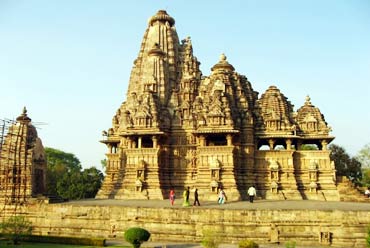