Fatehpur Sikri was the imperial city of the Mughal dynasty between 1571 and 1584. Built by the Mughal emperor Akbar, this royal city is one of a kind. The architectural grandeur of this deserted city cannot be described in words and one can only experience the aura of its magnificent edifices by seeing them.

The buildings within Fatehpur Sikri are a unique blend of different architectural traditions. Though the general layout and concept of the buildings conform to the Islamic style of architecture, the actual buildings (mainly palaces), their ornate columns, arches, carving style, etc., show a strong Hindu style in general and that of Gujarat and Rajasthan in particular.

Akbar was the greatest of all the Mughal rulers and one of the best to have ruled India. In 1556, he ascended the Mughal throne at the tender age of 14, after the sudden demise of his father, Humayun. As soon as he consolidated his power, he turned his attention towards building an imperial capital in Agra. The result was the Agra Fort, which not only served military purposes, but was also the royal residence. Most of the buildings within the precincts of this magnificent Red Fort are a mixture of different architectural styles. The unique integration of these different styles has given the buildings and palaces within the fort a distinctive look. The assimilation of the different architectural styles was the reflection of the period of prosperity and social tolerance, which was the hallmark of Akbar's administration.

However, in the course of time, Akbar decided to shift his capital to Fatehpur Sikri near Agra. Akbar used to visit the hamlet of Sikri to take the blessings of the great Sufi saint Salim Chisti in order to have an heir to his throne. Akbar's visitations were fruitful, for he was blessed with three sons. The new city, built on a ridge, grew into a magnificent township larger than contemporary London.

There are a number of buildings within the Fatehpur Sikri complex. Each of the small palaces in Fatehpur Sikri has a specific purpose and generally faces a courtyard.

It is an enclosed space surrounded by colonnades and has a large open area where petitioners and courtiers once stood in attendance. On the western face of this building is the pavilion where the emperor sat in honour surrounded by his courtiers.

The Diwan-I-Khas (Hall of Private Audience)-used for serious, confidential, diplomatic, and religious discourses-is just behind. The Diwan-I-Khas is famous for its central decorated pillar consisting of 36 elegantly carved brackets in the Gujarati style-heavy and ornate, and sprouting in shape.

The most intriguing building in Fatehpur Sikri is the Panch Mahal (five-tiered palace), which is a five-storied pavilion of winds. The first two floors are of equal size, while the next two are graded. On top is a single kiosk or open pavilion. Each of the floors is supported on pillars. Originally, jali screens stood between the pillars. The pavilion was originally used by the women of the royal household and ladies of the harem. From the top of the Panch Mahal, one can have a panoramic view of this imperial city with its buildings, palaces, and the courtyards linking them. The Turkish Sultan's palace is known for exquisitely carved panels depicting wildlife-lions, birds, and foliage. Near the Diwan-I-Aam, one can see a tank called the Anup Talao. Four bridges link the central platform at the Anup Talao. Here the famous court musician Tansen played music. Akbar's private apartments stand close to the tank.

Fatehpur Sikri was the imperial city of the Mughal dynasty between 1571 and 1584. Built by the Mughal emperor Akbar, this royal city is one of a kind. The architectural grandeur of this deserted city cannot be described in words and one can only experience the aura of its magnificent edifices by seeing them.

Jami Masjid (mosque), sacred center of Sikri, symbolizes the city's spiritual prominence. It stands at the southwestern end of Fatehpur Sikri. A high wall with gateways on three sides opens into a huge courtyard, 111 by 139 meters, making it the largest to be found in the Mughal period. The inner walls are lined with columns and cloisters and the western façade has a massive arched doorways behind which are three domes. In the vast courtyard stands the tomb of Sheikh Salim Chisti whose blessings are still sought by childless women. This tomb was originally built in red sandstone but was later on made with marble. The tombstone covered by cloth is under a canopy of ebony, mother of pearl and brass. A corridor for circumambulation surrounds the square tomb chamber. Fatehpur Sikri had a short life of splendor. Once Akbar left it in 1585, it never regained its lost importance and has remained the most magnificent and well-preserved ghost city of India.

Jodha Bai (Jodha Bai was Akbar's Rajput queen) has the most distinctively Gujarati and Rajasthani architectural features. A strong portal guards this place, which was the residence of Akbar's prominent queens. Also noteworthy are Mariam's Palace or Sunehra Makan (golden house), Palace of Birbal (one of Akbar's minister notable for his witticisms) and a miniature garden. 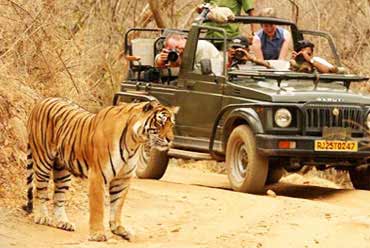