The Pench National Park on the border of Madhya Pradesh and Maharashtra has been known through the ages for its rich flora and fauna. Many writers like Captain Forsyth, A.A.D. Brander, R.A. Strendale, and Rudyard Kipling have all mentioned Pench in their books as the place with rich and beautiful flora and fauna.

Named after the river that flows nearby, Pench was declared a Wildlife Sanctuary in 1983, though it had been declared a notified area in 1972. Today, the park is the 19th Tiger Reserve in the country and takes pride in its tigers and other wildlife. The total area under the Pench Tiger Reserve comes to about 758 km, out of which a core area of 299 sq km is the National Park and 464 km the buffer area.

The park is situated in the Seoni district of southern Madhya Pradesh and runs in continuation with Pench National Park of Maharashtra. It is located between latitude 21°40' in the North and longitude 79°15' in the east. It is connected with an all weather metalled road network to other places of importance in Madhya Pradesh and Maharashtra.

The climate of this region is tropical with hot summers and cold winters. Monsoon touches the region in early July and remain there for the next two months. Winters are the most comfortable months though it is very difficult to view any exclusive wildlife during this season. The best time to visit this park is summer as many wildlife varieties come outside their natural habitat in search of water and waterholes in the park provide good views of the denizens of park.

It is blessed with forests spread in all the direction. As per general physiognomy, the forest type here is southern tropical dry deciduous teak and southern tropical mixed deciduous forest with other species of shrubs, trees, and climbers. There are many rare varieties of herbs and grasses in this region that are known to be of medicinal use.

The park is very rich in fauna and a number of endangered species have made it their habitat. There is high density of the wild pig, nilgai, chital, muntjac, gaur and four horned antelope. Sighting a tiger is as difficult here as in the other national parks in the country and it needs a lot of patience and luck to sight one.

Apart from mammals and other land-based wildlife, the park is also rich in bird life. According to an estimation of the wildlife authorities, the bird population in the park stands at over 125 species like barbets, bulbuls, minivets orioles, wagtails, munias, mynas, waterfowls, and blue kingfishers. The Pench River, water streams, and nallahs provide the best playground for the water birds of this region. They are also the habitat for crocodiles and fresh water turtles.

Nagpur, the winter capital of Maharashtra, is situated at a distance of around 93 km from Pench. The main attractions here include the Sitabuldi Fort, Council Hall, Cathedral of All Saints, High Court, Raj Bhawan, and Chhatris of the Bhonsle dynasty.

By Air - Airport - Sonegaon Airport, Nagpur (93 km from Pench National Park) Nagpur is the nearest airport connected to Mumbai and other places by regular flights.

By Rail - Railway Station - Seoni Railway Station (30 km from Pench National Park) Seoni is the nearest railway station connected to Mumbai and other places in the region by regular trains.

By Road - The nearest bus stand is at Seoni from where one can take buses or jeeps to the Pench National Park. Seoni is connected to almost all the places in Madhya Pradesh and Maharashtra by good road and rail networks. 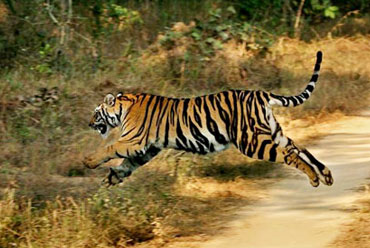