Shirdi is a small town located in the state of Maharashtra in western India. The place is around 296 km (around 6 hours drive) from Mumbai. Shirdi extends latitude 19°45¢ N and longitude 74°25¢ E.

A sleepy little village in the interiors of Maharashtra, Shirdi came into prominence when an old sage died in 1918. The saga of Sai Baba of Shirdi started in the middle of the last century when, as a boy of about 16 years of age, he first appeared here under a neem tree (Azadirachta indica) absorbed in a hard penance. For the next 60 years, he devoted his life for the upliftment of the poor and suffering. His origin, religion, and early life are shrouded in mystery, and though he is believed to be an incarnation of lord Shiva, his teachings transcended all religions and beliefs. Today, all places, persons, and possessions connected with him have become objects of veneration by millions of devotees who throng to Shirdi every year from all parts of the world. Sai Baba's shrine has been incorporated as one of the holy places in the world's map of pilgrimage.

Samadhi Mandir of Shri Sai Baba was actually owned by a millionaire from Nagpur and a famous Sai devotee Shreemant Gopalrao. He wanted to keep an idol of Murlidhar here. However, according to the legends, Baba himself became Murlidhar and the temple became the Samadhi Mandir of Baba. The Samadhi of Baba is built with white marble stones. The railings around it are full of ornamental decorations. The idol of Baba is a marvelous statue made up of Italian marble built by Late Balaji Vasant in 1954. The temple has an assembly hall for about 600 devotees. The assembly hall also houses a showcase having various items used by the sage. The first floor of the temple has the pictures depicting the life of the saint. The temple opens on 5 AM with morning prayers and close down at 10 PM with night prayers. Situated on the right side of the entrance of the Samadhi Mandir is Dwarkamai, a mosque. This was the place where the sage stayed until the end of his life. Main attraction of the site is the oil paintings of the sage.

The place from where Sai Baba first came to Shirdi in the form of a Bal Yogi (child ascetic) is known as Gurusthan. A temple has been constructed on this site. There is also a small shrine in Gurusthan. At a short distance lies Baba's Chavadi. Baba used to sleep here every alternate day. The Chavadi is divided into two parts. One part of the Chavadi has a large portrait of Baba along with a wooden bed and a white chair belonging to him. There is a cottage of Abdul Baba, an ardent devotee of Shri Sai Baba, in front of the Chavadi. Photos and various items that were handled by Sai Baba and Abdul Baba are there in the cottage.

There is a Maruti Mandir located at some distance from the cottage of Abdul Baba. This mandir was visited by Baba for the sat-sang with Devidas, a Bal yogi, who lived at the Mandir ten to twelve years before Baba arrived. There are also temples of village deities named Shani, Ganapati, and Shankar that are worth visiting. At some distance from Gurusthan, there is the Lendi Baug. This garden was made and watered daily by Baba himself. It got its name from a nullah (a drain), which used to flow there. Baba used to come here every morning and afternoon and take rest under a neem tree. Baba dug a pit, 2 feet deep, under the neem tree and kept a deep (a lighting object) lit in that pit. An octagonal deepgriha (lighthouse) called Nanda Deep has been built in marble stone in memory of this place. It constantly burns in a glass box. On one side of the deepgriha is a pipal tree and on the other side is a neem tree. Other sites to visit are Datta Mandir and Khandoba Mandir.

Situated around 5 km from Shirdi is Sakori. The place is home to the Upasini Maharaj. Shanisinghnapur is 70 km from Shirdi. A temple devoted to Shani is located here.

The most important festivals and events that are celebrated in Shirdi are Guru Poornima, Dussehra, and Ram Navami. These are the only days when the Samadhi Mandir of Shirdi opens for the whole night. Every Thursday, a palakhi bearing a photograph of the sage is taken out from the temple.

By Rail - The nearest railway station is Manmad (60 km) on the Central Railway, which is connected to many parts of the country with express trains. 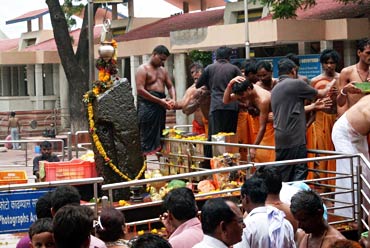 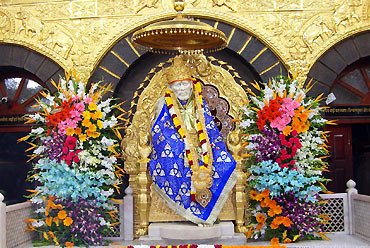