Sasan Gir Lion Sanctuary, which lies on the southwestern fringes of the Saurashtra Peninsula (west-central India), is the last home of some 300 Asiatic lions. It was created in 1913 to protect the largest surviving groups of the Asiatic lions. It was given a sanctuary status in 1965. Close to being an extinct species, the number of Asiatic lions has been steadily rising since 1980 in this safe haven. The vegetation in the area consists of teak with a mixture of deciduous trees, including sal (Shorea), dhak (Butea frondosa), and thorn forests. The terrain is rugged with steep rocky hillsides. A few springs also exist, but their flow is rather eccentric depending upon the season. Some sixty thousand tourists visited Sasan Gir Forest Reserve in 1999-2000.

The area is usually dry and arid, but with the onset of monsoon greenery returns and the region assumes a fresh and renewed face. Summers (April-June) are harsh with temperatures as high as 40°C while winters (December-February) are cool.

The Asiatic Lion alone draws hordes of visitors to the park each year. Sasan Gir is the only place in the world outside the African continent where the lion can be seen in its natural habitat.The Asiatic lion is slightly smaller than its African counterpart but is a majestic sight to behold. The forest is also home to species like leopard, chital, chinkara (gazelle), wild boar, wild ass, nilgai, spotted deer, and four-horned antelope. It is also the haunt for monkeys, parrots and India's national bird, the peacock. A crocodile-rearing and research center also flourishes adjacent to Sihn Sadan Lodge, where hatchlings are reared and then consecutively released into their natural habitat.

Safaris are popular, although one needs a permit before embarking on one. Permits are issued on the spot at the Sinh Sadan Forest Lodge office. Jeeps and minibuses are freely available for touring the forest. The option of the jeep is a better one as it can travel to areas where the bus cannot, hence makes your outing more meaningful.

The best time to observe lions in their natural surroundings is at dawn and dusk, when they are on the prowl. Though the Asiatic lion is an elusive creature, a morning safari awards a good chance of seeing it, in contrast to a hot afternoon safari. With luck on your side, you may spot more than one.

Junagarh, which is 64 km from Sasan Gir Reserve, is an important heritage sight. Veraval, to which Sasan Gir has direct links, is interlinked to Somnath-a popular place for Hindu pilgrims. 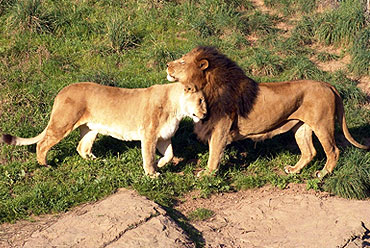