It is located in the Indian state of Bihar about 60 km southeast of the capital Patna. Rajgir is famous for rock-cut caves, forts, Buddhist ruins, shell inscriptions, Hindu and Jain temples and Muslim tombs. The place is well connected to other parts of Bihar and eastern India through railway and roads.

The climate of Rajgir like the other parts of the Gangetic plains is extreme. The summer months from April to July are hot and humid here and the average temperature can reach approximately 45°C and the relative humidity can go up to around 80 percent. Winters are cold with the average night temperature at around 10°C. Normally, the average temperature stays around 20°C. Monsoon touches this region in July/August and continues till September.

Now a small town, Rajgir was once the capital of the kingdom of the mighty Magadh empire and was known by various names such as Vasumati, Barhdrathpura, Girivraja, Kusagrapura, and Rajgriha. The great Hindu epic Ramayana says that the mythical king Vasu, a son of Lord Brahma, founded this town and named it Vasumati.

According to the Mahabharata, Jarasandha who was killed by Bhima in a duel, ruled over this area and his capital was at Barhdrathpura. Though nothing is known about the other names Kusagrapura, Girivraja and Rajgriha, they figure regularly in Buddhist and Jain texts. The last Rajgriha is the one from which the present name Rajgir has been derived.

During the sixth century BC, Rajgir was the capital of the powerful kingdom of Magadh. It was also the centre of great religious and intellectual activity. The Buddha made several visits to this town and stayed here for a considerable time to propagate his doctrine. Jain texts, on the other hand, say that their last apostle, Mahavira, passed 14 rainy seasons in Rajgir and Nalanda.

It was also the birthplace of Muni Suvrata, a predecessor of Lord Mahavira and the center of the Ajivika sect.

Rajgir, though small area wise, is an important pilgrimage center for three of the great religions of India, Hinduism, Buddhism, and Jainism. There are pilgrimage sites of each of these religions in the town.

On the Vaibhava hill are the Saptkarni caves where the first Buddhist Council was held. The Saptkarni cave is also the source of the Rajgir hot Sulphur springs that have curative properties and are scared to the Hindu's.

From the foot of the Vaibhava Hill, a staircase leads up to the various temples. Separate bathing places have been organized for men and women and the water comes out from spouts through the Saptadhara or seven streams believed to find their source behind the Saptkarni Caves up in the hills. The hottest of the springs is the Brahmakund with a temperature of 45°C.

On the Griddhakuta or Vultures Peak, the Buddha set in motion his second Wheel of Law and for three months every year during the rainy season preached his disciples about it. The Buddha Sangh of Japan has constructed a massive modern stupa, the Shanti (peace) stupa at the top of the hill. One can climb up to the top along a bridle path but the aerial chairlift is far more exciting.

Ajatshatru's Fort, built in sixth century BC, is situated around six km from the Rajgir railway station. The fort was. Bimbisara's jail is also situated here where, according to the legends, he was imprisoned by Ajatshatru.

Above the hot springs on the Vaibhava Hill is a rectangular stone sculpted by the forces of nature, which appears to have been used as a watchtower. It later become the resort of hermits and is popularly known as Jarasandha Ki Baithak after the name of the King Jarasandha, a contemporary of Lord Krishna described in the epic Mahabharta.

The Swarna Gufa is around six km from the railway station. It is believed that there is a treasure house of gold still hidden here. It is said that if one can decipher the inscription engraved here, the doors to the golden vaults would open.

The Rajgir Mahotsav is held every year from October 24 to 26. Classical dance, folk dance, music, and art performances are organized during this festival.

The Malamasa Mela is celebrated in Rajgir every three year and a large fair is held here. According to the Indian solar calendar, every third year has 13 months, which is called Malamasa.

Another festival specific to Rajgir is the Makar Sankranti Mela, held on the last day of the lunar calendar month of Paus, in mid-January. Devotees offer flowers to the deities of the temples at the hot springs and bathe in the holy water.

Twelve kilometers from Rajgir is Nalanda, which was a resort for saints and ascetics. It was made into a university in fifth century AD and remained the greatest seat of learning for over 700 years.

Pawapuri is situated some 35 km from Rajgir and believed to be the place where Lord Mahavira died.

Patna, the capital of Bihar and a great historical city is situated around 60 km northeast of Rajgir.

By Air - The nearest airport for Rajgir is Patna. There are regular flights for Delhi, Calcutta, Varanasi, Lucknow, Mumbai, and Katmandu from this airport. The nearest international airport is Calcutta.

By Rail - Rajgir is on a branch line of Eastern Railway and there are daily trains to Patna and other places nearby.

By Road - There are regular buses from Patna, Nalanda, Gaya, and Bodhgaya to Rajgir. One can arrange for guided tour packages to Rajgir from Patna. 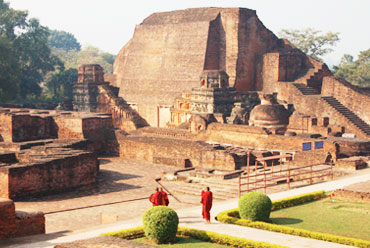 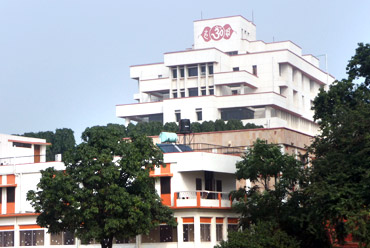