Pattadakal is a small village in the south Indian state of Karnataka famous for its temples of the Chalukyan age. Now declared a World Heritage Site by UNESCO, this place is situated around 20 km from Badami and 514 km from Bangalore.

The climate of Pattadakal, like other places in North Karnataka, is pleasant. The place is accessible throughout the year. Monsoon starts from mid-April and continues to mid-September. The best season to visit this place is during winter, that is, from October to March.

Pattadakal was the second capital of the Chalukyan Empire after Badami. More than that, it was also the ceremonial center where kings were crowned and commemorated. It was never a part of any town or village though it was on the banks of the Malaprabha River. It seems while most of the building activity took place at Badami, the political capital, Pattadakal was the dynastic cult center of the Badami Chalukyas. The earliest temples of Pattadakal are from the 4th century AD and the addition of new temples continued there for around four more centuries. The latest architecture is a Jain temple of the Rashtrakuta period (9th century).

The temples of Pattadakal display the blending of the Rekha Nagara Prasada and the Dravida Vimana styles of architecture. The oldest is the Sangamesvara Temple built by Vijayaditya Satyasraya (AD 697-733). It is a simple but massive structure.

The Virupaksha Temple of the Chalukyan period served as a model for the Rashtrakuta ruler to carve out the great Kailash at Ellora. The sculptural art of the early Chalukyas is characterized by grace and delicate details. The ceiling panels of the navagrahas, dikpalas, the dancing Nataraja, the wall niches containing Lingodbhava, Ardhanarisvara, Tripurari, Varahavishnu, and Trivikrama bear ample testimony to the sculptor's skill as well as the cult worship in vogue.

The Mallikarjuna Temple, next to the Virupaksha Temple, is almost identical in design though it is in an advanced state of ruin.

About 500 m south of the main enclosure is the Papanatha Temple, whose inner hall is guarded by Nandi and Virabhadra. There are 16 pillars in the main hall with beautiful carvings.

The Kashivishvanatha was probably built after the collapse of the early Chalukyan dynasty in the middle of the 8th century. The Jambulinga has a very interesting horseshoe-shaped arch framing a rhythmic image of a dancing Shiva. The Galganatha was probably never completed, but its design is the most highly evolved of the northern styles.

Aihole is around 25 km off Pattadakal and, with Badami and Pattadakal, completes the three major centers of architecture of the Badami Chalukyas. The place was the regional capital of the Chalukyas and covers a whole spectrum of buildings of that era, starting from simple shrines to the more complex buildings. Badami (25 km) was the capital of Chalukyas and a major center of architecture. Here, one can see some of the earliest and finest examples of the Dravidian temples and rock-cut caves.

By Air - Pattadakal does not have an airport of its own. The nearest airport is Bangalore, around 514 km away. There are many flights from Bangalore to other important cities of India like Mumbai, Delhi, and Calcutta.

By Rail - The nearest railway station is Badami, 20 km away. There are around five regular trains for Bijapur from Badami.

By Road - The State Highway 14 links Pattadakal with Badami. Aihole is round 45 km from Pattadakal. The place is connected to other major centers like Bijapur (134 km) by road. 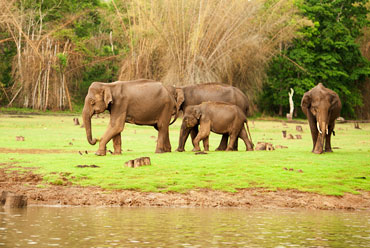 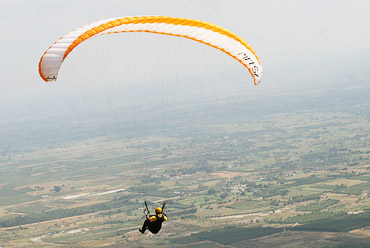 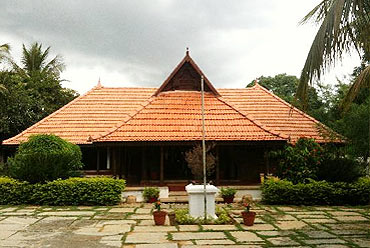