Mussoorie, like other hill resorts in India, came into existence in the 1820s or thereabouts, when the families of British colonials began making for the hills in order to escape the scorching heat of the plains. Small settlements grew into large stations and were soon vying with each other for the title of "queen of the hills." Mussoorie's name derives from the Mansur shrub (Cororiana nepalensis), common in the Himalayan foothills; but many of the house names derive from the native places of those who first built and lived in them. Today, the old houses and estates are owned by well-to-do Indians, many of whom follow the lifestyle of their former colonial rulers. In most cases, the old names have been retained.

Take, for instance, the Mullingar. This is not one of the better-preserved buildings, having been under litigation for some years; but it was a fine mansion once, and it has the distinction of being the oldest building in Mussoorie. It was the home of an Irishman, Captain Young, who commanded the first Gurkha battalion when it was in its infancy. As you have probably guessed, he came form Mullingar, in old Ireland, and it was to Ireland that he finally returned, when he gave up his sword and saddle. There is a story that on moonlit nights a ghostly rider can be seen on the Mullingar flat and that this is Captain Young revisiting old haunts.

As everywhere, the Scots were great pioneers in Mussoorie too, and were quick to identify Himalayan hills and meadows with their own glens and braes. There are over a dozen house names prefixed with "Glen."

The English, of course, went in for castles-there's Connaught Castle and Grey Castle and Castle Hill, home for a time to the young Sikh prince, Dalip Singh before he went to England to become a protégé of Queen Victoria.

Mussoorie did have a Dickens connection in the 1850s when Charles Dickens was publishing his magazine Household Words. His correspondent in India was John Lang, a popular novelist and newspaper proprietor, who spent the last years of his life in Mussoorie. His diverting account of a typical Mussoorie "season," called "The Himalaya Club," appeared in Household Words in the issue of March 21, 1857.

"The Mall would be lifeless without people and people would find Mussoorie lifeless without the Mall," a shopkeeper observes. The main artery of Mussoorie, the Mall certainly responds to the influx of visitors in the same manner as a person fighting for life-sustaining breath revives after receiving oxygen.

Shops closed for the winter spring to life when summer approaches. Soon, the trickle of visitors swells to a steady, heartening stream. Happy laughter and the gay chitter-chatter of a cosmopolitan band of people from the plains flows from one open end of the Mall to the other. Forming a fascinating fashion parade with a potpourri of fashions from different parts of the country, visitors glide up and down the Mall, gulping the fresh mountain air, gazing at the assortment of goods in the shops that line the Mall.

There is no noisy traffic here. Only the occasional, measured clatter of hooves as a horse-riding tourist goes past. And every now and then, pedestrians move to the sides as two sturdy hillmen pulling hand rickshaws occupied by people reluctant to walk, signal their approach with the spirited ringing of a bicycle bell mounted on the handle of the quaint rickshaw.

Running through Kulri Bazaar, on towards Library Chowk, the Mall, like a magician pulling a rabbit out of a hat, offers an amazing variety of pastimes. Haggling, bargaining with rosy-cheeked Tibetans over the prices of 'imported' goods and Tibetan metalware; browsing through a bookshop; searching for antiques in the curio-shops; choosing hand-carved walking sticks or handmade cane baskets and other wares. There are embroidered wall hangings, dry pinecones, hill jewelry, garments and a dozen knick-knacks besides.

If tired of shopping or window-shopping, there is the cable car that starts from the Mall and goes up to Gun Hill. There is a revolving restaurant and scores of fancifully named eating-places. City-bred children are torn between trying to run up and down every steep path they can spot, and video parlors, a tiny park with swings and see-saws, candy floss wallahs, balloon wallahs.

rom the Mall, there is a feast of views of the surrounding hills and the Doon Valley below. As evening falls, there is the prospect of watching a glorious sunset, and in the deepening darkness, twinkling light appear one by one in the valley below. Simultaneously, the Mall transforms itself into long, glittering rows of shops. As the shopkeepers on the Mall bring down their shutters on yet another day, the mood changes again. Visitors spill onto the Mall. The shopkeepers have left, the hardworking rickshaw wallahs have earned a rest and the shaggy mountain horses too have gone. The soft mountain nigh, the coolness, the sudden, complete silence that descends on the Mall act like a salve. Couples walk peacefully hand in hand, talking, perhaps, of the good times that were and will be…. The Mall is Mussoorie's main artery, certainly. It is also a catalyst of dreams.

The High Ride - Most people ascend the 400 meters or so from the fashionable Mall to the historical Gun Hill with bated breath. For them, there is the thrill and excitement of reaching Gun Hill in a cable car, coupled with the promise of rare, mesmeric views of the great Himalayan peaks and a bird's eye view of Mussoorie and its environs. But not many people are aware that both Gun Hill and the ropeway and its two cable cars have a chequered history.

More than 160 years ago, after the Gurkha War in 1823, a shooting box was set up atop a hill-143 meters above sea level. Thereafter, a gun boomed everyday from the hill at 12 o'clock to keep time, and the hill became known as Gun Hill. Today, ironically and yet appropriately perhaps, the gun which once marked time for Mussoorie has itself been whisked away by the marching times, but Gun Hill lives on.

Once accessible by a steep, narrow bridle path, Gun Hill can now be reached in just about four minutes by a ropeway set up in 1970. On a bright sunny afternoon in October 1978, a handful of people lazing on the terrace of the Hill Queen Hotel were astounded when there was a loud cracking sound and the cable car going up to Gun Hill landed with a resounding thud a foot or two away from them.

After a year's lay off, the cable cars were back in business swinging their way up to Gun Hill, now dotted with mock ornate photo studios, welcoming chai (tea) shops and a couple of telescope shops-with load after load of starry-eyed passengers. Today, during the peak summer season, the cable cars swing between the Hall and Gun Hill more than 100 times a day.

The highest point that one can visit around Mussoorie is the famous Surkhanda Devi Temple at 10,000 feet-35 km down the Mussoorie-Tehri road. Perched on a peak, the temple demands a stiff two-km climb form devotees. The temple, goes the legend, was built on the site where the head of Shiva's consort (Shiva is the destroyer in the Hindu trinity) fell after it was chopped off to stop Shiva's terrifying dance of death that was shaking the universe to its very core.

Nag Tibba, 41 km from Mussoorie, also soars to an altitude of 10,000 feet, and entails a fairly long, taxing but exhilarating trek, and therefore more time. Thick pine forests, mountain brooks and slate-roofed villages keep one company for the greater part of the trek to Nag Tibba peak. The nearest accommodation is a forest rest house at Deolsari, about five hours of trekking below Nag Tibba.

Most people looking for a few quiet days prefer to sojourn amongst the picturesque pine-clad slopes of Dhanaulti, 24 km from Mussoorie, 11 km before the Surkhanda Devi temple. A comfortable Tourist Bungalow and a private hotel, the Dhanaulti Breeze, make Dhanaulti an ideal getaway from the milling season crowds at Mussoorie.

Thirty-one kilometers form Dhanaulti, along the Tehri road, is Chamba-the home of apples. A tourist bungalow has been built atop a mountain, and with the approach of the monsoon, fluffy clouds come in low, enter through the windows, move across the room, and float out through the door.

Closer to Mussoorie, at an altitude of 4,500 feet, Kempty Fall is perhaps the biggest attraction. The highest (over 40 feet) and most beautiful (the fall splits into five distinct cascades) of the waterfalls around Mussoorie, Kempty Fall is 15 km from Mussoorie, on the road to Chakrata.

Past Kempty Fall, 12 km downhill, you cross the Aglar River and reach the legendary Yamuna River. Trout are in abundance here, and fishing permits can be obtained form the Divisional Forest Officer, Mussoorie.

The latest addition to man-made attractions around Mussoorie (six km away, on the road winding down to Dehradun) is a small, artificial lake, complete with pedal boats.

The two-kilometer walk from Library Chowk to the colorful Municipal Garden, still known by its old colonial name of Company Bagh, is yet another favored walk in Mussoorie. Beyond the garden with its artificial lake, the walk can be continued, if one is so inclined, towards Cloud End. In the vicinity can be seen the estate of the first Surveyor General of India, Colonel George Everest (later sir George Everest), after whom the world's highest mountain is named. A Bibi Khana-outhouses for the Indian consorts of Englishmen-is an interesting feature of the time-ravaged estate, which, according to land revenue records of 1839, "belonged to Colonel Everest." The Uttar Pradesh Tourism Department has now acquired the sprawling 192-acre estate and plans to convert it into a holiday resort.

For many cricket fans, the walk towards Cloud End offers a landmark of more recent times. On a road branching off before Cloud End, is a house that belongs to the father-in-law of Sunil Gavaskar, the cricketing legend.

Camel's Back Road, the walk to the Municipal Garden or Company Bagh, and on towards Cloud End are gentle, leisurely walks blessed with superb views. Quite obviously, scenic beauty is a feature shared by all walks in Mussoorie. Even the walk towards Charleville and the Tibetan settlement of Happy Valley is a rewarding experience. However, for the more intrepid tourist there are challenging walks as well such as the ones to Benog Hill (7,000 feet high, seven kilometers from Library Bazaar, it boasted once of an observatory), and to Lal Tibba, the highest peak (8,000 feet) at Mussoorie. About four kilometers from Picture Palace, Lal Tibba is an ideal location for a picnic. Near Lal Tibba is Childer's Lodge, where a powerful 'coin-operated' binocular is available for surveying the mountains around. In the distance can be seen peak after peak of snow-capped mountains.

From the Jolly Grant airport of Dehradun, you may go up to Mussoorie (2¼ hours, 60 km). The overnight Mussoorie Express links Delhi to Dehradun, the railhead for Mussoorie. Delhi to Mussoorie is 290 km by road. Dehradun to Mussoorie is 35 km. We would provide you all India tourist permit vehicles for the local transportations and also for the intercity drives too.

Mussoorie is one of the most popular hill stations of India that you can visit during any time of the year, according to your interest. However, the summer months, from March to June, is the peak season. The average temperature at this time is around 37°C. One can partake in sightseeing, cable car ride and other outdoor activity at this time. The rains enter Mussoorie in July and stay here till mid-September. Though the rainfall is moderate but it can make sightseeing, a difficult activity. Though at this time, there are off-season discounts. October to February is the winter season in Mussoorie when the place becomes chilly and experiences snow in this high-altitudes. Explore the place which is at its beautiful-best during this time. 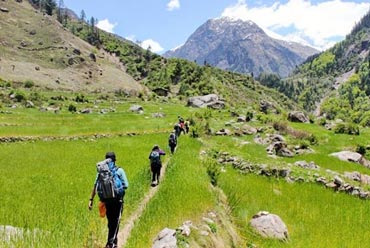