The word Kumaon is believed to have been derived from "Kurmanchal," meaning land of the Kurmavatar (the tortoise incarnation of Lord Vishnu, Preserver of the Hindu Trinity). The region extends from the northern end of the Gangetic plains right up to Tibet. The snow-clad mountains, crystal-clear lakes, and the plethora of flora and fauna not only enable one to constantly think about the Himalayas but to behold their pristine magnificence time and again.

Kumaon hills provide vast attraction for the tourists, trekkers, and pilgrims. The beautiful scenery and the colourful cultural life of Pithoragarh, Mukteshwar, Chaukori, Binsar, Kausani, Sitalakhet, Champawat, besides many other popular hill stations, are waiting to be discovered.

Kumaon, with an area of 21,035 sq km, is situated in the north Indian state of Uttaranchal (formerly part of Uttar Pradesh). It is parted from Nepal in the east by River Kali. The Kailash-Mansarovar region of Western Tibet forms its backdrop in the north. In the west, the Chamoli and Pauri districts of Garhwal region make the boundary. Kumaon shares its southern boundary with the districts of Bareilly, Pilibhit, Rampur, Muradabad, and Bijnor.

Kumaon is the land of the Mahakali and its major right bank tributaries, the Goriganga, the Dhauliganga, and the Ramganga.

The geology of the Kumaon has three distinct components. The greater Himalayas is mainly composed of granites. The lesser Himalayas is characterized by the presence of unfossiliferous sediments and has mainly crystalline and metamorphic rocks like gneisses, schist, slates, phyllite, etc. Apart from these three divisions, the Terai region consists mainly of detritus, which is washed from the Shivalik range by fast flowing rivers. Boulders and shingles are found closer to the hills while clay and sand are transported to larger distances.

Humankind has been around in Kumaon for a very long time. Evidences of Stone Age settlements have been found in Kumaon, particularly the rock shelter at Lakhu Udyar. The paintings here date back to the Mesolithic period.

The early medieval history of Kumaon is the history of the Katyuri dynasty. The Katyuri kings ruled from the 7th to the 11th century, holding sway at the peak of their powers over large areas of Kumaon, Garhwal, and western Nepal. The town of Baijnath near Almora was the capital of this dynasty and a center of the arts. Temple building flourished under the Katyuris and the main architectural innovation introduced by them was the replacement of bricks with hewn stone.

On a hilltop facing east (opposite Almora), is the temple of Katarmal. This 900-year-old sun temple was built during the declining years of the Katyuri dynasty. The intricately carved doors and panels have been removed to the National Museum in Delhi as a protective measure after the 10th-century idol of the presiding deity was stolen.

After an interregnum of a couple of centuries, the Chands of Pithoragarh became the dominant dynasty. The magnificent temple complex at Jageshwar, with its cluster of a hundred and sixty-four temples, was built by the Chand rulers over a space of two centuries. Dedicated to Lord Shiva, the evocative carvings are complemented by the beautiful cedar forest around it.

Uttarayani Mela is held at a number of places including Bageshwar, Rameshwar, Salt Mahadev, Chitrashila (Ranibagh), Pancheshwar, etc., on Uttarayani day. At Pancheshwar, the dola (wooden carrier of the god) of Chaumu comes down to the temple.

Shravan Mela (Jageshwar) is held in the Jageshwar temple complex lying in the beautiful Jatganga valley, housing one of the 12 jyotirlingas of India. Two large fairs are held at Jageshwar, one on Shivratri (February), and the other in the month of Shravan (July-August).

A fair is held here every year at Gananath (47 km from Almora) on Kartik Poornima (October/November), when thousands of pilgrims come to worship Lord Shiva and Ganesha. Childless couples also come here in large numbers to evoke blessings for the gift of a child.

Situated in the wide valley of Ram Ganga, Dwarahat is 38 km from Ranikhet and has a cluster of old temples. A huge fair is organized here every year on Baisakhi Day (April).

Kasar Devi (Almora) is the venue for fairs held twice a year during the summer and winter months.

Nanda Devi melas are held at several places including Almora, Nainital, Nauti, Dandidhara, Mansyari, and Ranikhet. At Almora, thousands of people take part in a procession carrying the dola of Nanda Devi.

The climate of the Western Himalayan region of Kumaon is alpine with chilly winters and mild summer. In the winters, temperature can dip below zero in the Greater Himalayas while it may go up to 32°C in the summers.

How to Reach Kumaon

The nearest airport is a Pant Nagar (Nainital). Regular flights operate during the summer. An all-weather airstrip has been constructed at Pithoragarh.

The nearest railhead for Nainital and Almora is Kathgodam.

Kumaon is well connected with most important cities by road.

Nainital:  At 1938 m in the Kumaon hills, this attractive mountain resort was once the summer capital of Uttar Pradesh and now a bustling hill station. Naini Lake is often said to be one of the emerald green eyes of Lord Shiva's wife. One can enjoy a ride on pedal boats on a quiet summer evening.

Built in 1847, soon after the British arrived, St. John's Church contains a brass memorial to the victims of a famous landslide. The few bodies that could be recovered from the rubble were buried in the graveyard here.

A chairlift (ropeway) takes one up to the popular viewpoint of Snow View (2270 m). At the top, there are powerful binoculars for a close-up view of Nanda Devi, situated 7817 m above sea level.

There are good views and spectacular sunsets over the plains from Hanuman temple, 3 km south of Tallital. Just over 1 km further on is the state observatory, which is open at weekends.

Ranikhet:  North of Naini Tal at an altitude of 1829 m, Ranikhet is a peaceful hill station offering excellent views of the snow-capped Himalayas, including Nanda Devi. It is an important army town and the headquarters of the Kumaon regiment. Though not developed as a tourist center, Ranikhet is a delightful place to spend some time. There are several good walks-to Jhula Devi temple-and the orchards at Chaubatia (3 km).

Almora: The picturesque hill station of Almora, at an altitude of 1650 m, is one of the few hill stations not created by the British. Some 400 years ago, it was the capital of the Chand rulers of Kumaon.

The area has the reputation of being a "power center" and travellers rent houses and stay here for months.

Pithoragarh: The easternmost hill district of Uttarakhand, Pithoragarh is often referred to as miniature Kashmir. Nestling in a small valley, 5 km long and 2 km wide, the town was an important landmark of the Chand rulers of Kumaon and known as Saur valley. It is situated at an altitude of 1650 m above sea level. One can have panoramic views of vast snow range extending from Trishul, Nanda Devi, Panchchuli Group, and Mount Appi of Nepal from the Chandak hill located at around 2000 m.

Chaukori:  The charming and picturesque town of Chaukori is situated in the heart of Pithoragarh district (112 km) on the verge of the exciting Jim Corbett country. Literally cupped in a bowl by the majestic Himalayas, Chaukori is famous not only for the magnificent view it offers of Panchchuli peaks but also for its breathtakingly beautiful sunsets. The spectacular sunrise and sunset tinge the awe-inspiring pristine peaks, making Chaukori an idyllic holiday resort amidst unspoiled nature.

Kausani: Nestling amongst thick, dense pine forests, atop a narrow ridge and separated from the towering mountains of the Nanda Devi range by low, medium mountains, at Kausani the grandeur of the Himalayan scenery comes alive. The view of the snow-covered Trishul and Nanda Devi is so clear that one gets a feeling of the snow within touching distance. Its ethereal sunrise and a 300-km-wide view of the Himalayan range have attracted thousands of visitors to this place time and again.

Jim Corbett National Park: India's first national park, cradled in the foothills of the Himalayas, spreads over an area of 520 sq km and is 290 km from New Delhi. The magnificent Ramganga River flows through the entire length of the park. Corbett has the highest density of tiger in India. Other carnivores include the leopard, elephant, bear, and sambhar. Basking along the banks of the Ramganga are the slender gharial and the marsh crocodile. The river is rich in the magnificent mahseer; however, angling is not permitted inside the National Park. There are watchtowers, elephant safaris and jeep safaris for wildlife viewing.

The best time to visit Corbett national Park is from November to May. The park is closed from mid-June to mid-November. The nearest town Ramnagar (51 km) is the ideal linkage for rail. Nearest airhead is at Pantnagar (110 km).

Bhowali: This small health resort, situated at an altitude of 1,707 m, is around 10 km from Nainital. It has the best T.B. sanatorium in the country. Bhowali is also the main export center for hill fruits and vegetables.

Ramgarh: Located 16 miles from Nainital, Ramgarh is famous for its apples, apricots, and peaches. India's Nobel laureate, Rabindranath Tagore, stayed here for a while and wrote some of his famous poems.

Mukteshwar: Perched at an altitude of 2,286 m above sea level, Mukteshwar is 33 miles from Nainital. It is well known for its Veterinary Research Institute established in 1898. Mukteshwar presents a panoramic view of the snow-clad Himalayas in early summer and autumn.

Kumaon has three distinct trekking regions: the foothills of the Himalayas of the Nainital district and the lake area; the hill areas of Almora, Ranikhet, Kausani, Chaukori, and Pithoragarh; and the Himalayan glacier area of the Kumaon hills.

Nainital and the lake area is the most suitable for schoolchildren with pleasant trekking trails. Basic facilities for amateur trekkers are available in and around Nainital. The hill areas of Almora, Ranikhet, Kausani, Chaukori, and Pithoragarh are ideal for the more experienced trekkers. The Himalayan glacier area of the Kumaon hills has difficult routes, picturesque riverbeds, and rhododendron forests. 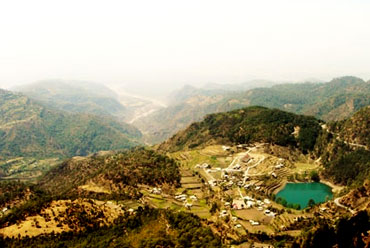