Khajjiar is a small grassy meadow located in the picturesque Chamba valley. It is an important picnic spot whose quiet environs beacon the tourists traveling between Dalhousie and Chamba. The stopover at Khajjiar is a welcome break for the weary tourists.

Khajjiar is located in the northwestern part of the state of Himachal Pradesh, in the northern region of India. It is perched at an altitude of 1951 m above sea level. Khajjiar is 22 km from Dalhousie and 24 km from Chamba. The climate of Khajjiar is alpine. Summers (April-June) are mild and winters (November-February) are cold and bitter. It experiences southwestern monsoon rains in July-September.

The best time to visit Khajjiar is between March and June

The history of Khajjiar is linked to the rulers of Chamba. The local Rajput rulers ruled Chamba valley in the 6th century ad and made it their capital city. This region became the part of the Mughal Empire in the medieval period and later came under various Sikh kingdoms. Finally, it was taken over by the British. It became a part of the state of Himachal Pradesh when it came into being on April 15, 1948.

Khajjiar is a small grassy meadow (1 × 1 sq km) between tall deodar trees. This emerald opening amidst the woods has a small pond at its center. There are two floating islands in the middle of the pond; they are sometimes hidden from view by the tall grass that grows on them.

Khajjiar, known as one of the "most charming spots in the Himalayas," derives its name from its ancient, golden-domed temple of Khajinag. The 12th-century Khajinag temple is a small shrine dedicated to the local Goddess or the Devi. This temple is also known as the Golden Devi temple, as it is adorned with a golden dome and spire. Pilgrims visiting the Chamba valley often come to this temple.

A nine-hole golf course is an added attraction at Khajjiar.

By Road - Khajjiar is a small tourist spot, and can only be reached by road. It is well connected with other towns in the Chamba valley. Buses from Chamba (1½ hour) and Dalhousie (1½ hour) stop at this picnic spot. Travelers can also hire taxis from either Dalhousie or Chamba to reach here. One can explore the pristine beauty of this spot by taking a walk in the meadow and around the small pond. 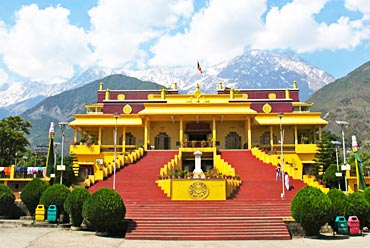 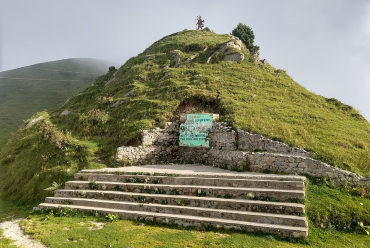