Bangalore is an year-around destination; anytime is the best time to visit Bangalore Palace but winters are highly recommended.

Bangalore Palace is an architectural landmark of the city. The palace is enclosed with manicured garden and houses attractions that interest travelers around the world; like the Palace Ground and Fun World. Fun World is an amusement park with joy-rides, water-rides and swimming pools. Some of world’s most renowned artists like Enrique and Guns N’ Roses have performed in the Palace Grounds, which is used for public events like concerts. Tudor style of architecture was adopted to build this palace that was commissioned in 1864 by Rev. Garrett.

The Bangalore Palace was commissioned in 1864 by the first principal of Central High School, Rev. Garrett. The construction was completed in 1884. The palace was later brought in 1873 by British officials who took care of the education of Prince HH Chamaraja Wodeyar.   This deal was finalized at the price of INR 40000. It was then renovated to make it more beautiful. Cornices and relief paintings on ceilings, floral motifs and detailed wooden carvings were generously incorporated to decorate the interior. Furniture in neo-classical, Edwardian and Victorian style was bought from Lazarus and John Roberts. Horticulturist Gustav Hermann Krumbiegel took over the gardens of the palace. About 35 rooms were further added in the palace along with manual lifts and wooden fans.

The royal family after 100 years handed over the possession of the palace to two companies. Of the total area  454 acres of the palace (including the ground), 110 acres were given to Chamundi Hotels Private Limited and 344 acres were given to Sri Venkateswara Real Estate Enterprises Private Limited. However, this act of providing the possession to these companies still lies a mystery as the said companies were yet to be incorporated in 1970 and thus it was a fraudulent transaction against which Maharaja’s son Srikanta Datta Narsimharaja Wadiyar instituted a civil suit.

This legal conflict continued and during this time Srikanta distributed the land among his five sisters. Today several events like exhibitions, marriages rock shows, tennis matches, cricket marches and horse academies take place here.  Later the prince won the suit and got his potion back except 45 acres which remained with Chamaraju Group.

Architecture and Interior of Bangalore Palace:

Bangalore Palace is built in Tudor style of architecture with fortified turrets, battlements and towers. Granite seats covered with ceramic tiles in fluorescent blue are placed in the open courtyard of ground floor. Take the stairs and reach opulent Durbar Hall that has an elephant head mounted in it and paintings of Raja Ravi Verma. The staircase is decorated with beautiful paintings.

The Durbar Hall is mainly yellow in color, even the sofa set in the hall are yellow too. Gothic- styled stained glass windows of the wall are pleasing to the eyes. To separate ladies’ sitting area a screen is used. In this area the ladies could watch the proceedings of assembly in privacy. Paintings used for decorating interior walls of the palace belong to mid-19th century

One spectacular attraction of Bangalore Palace is most definitely Fun World. The amusement park houses various water-rides, swimming pools and joy-rides. Timing and fees for the same differ according to the section you are interested in. Prices are as low as INR 10 and reach as high as INR 500.

Another interesting area of the palace is Palace Ground which is used for public events like concerts. World-renowned artists performed and perform here like Ludacris, Jay Sean, Aerosmith, The Rolling Stones, Guns N’ Roses, Enrique Iglesias, Akon, Black Eyed Peas and many others. 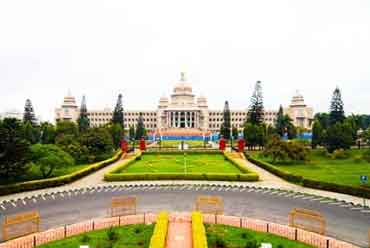 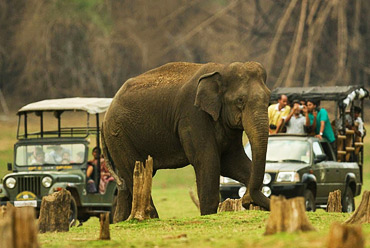