Jantar mantar in Delhi is one of the five observatories built in 1724 by the Maharaja of Jaipur - Sawai Jai Singh II for the pursuit of scientific knowledge. A tour of Delhi would be incomplete without a look at this spectacular observatory that bears witness to the thirst for scientific knowledge in Indians from an early age.

Jantar Mantar in Delhi is one of the five observatories built by the Maharaja of Jaipur - Sawai Jai Singh II. Maharaja Sawai Jai Singh II was also a noble in the Mughal court and a passionate astronomer. The Jantar Mantar was built to trace the astronomical phenomena and to ascertain scientific data from the same. The observatory in Delhi emphasizes the thirst for scientific knowledge of the Mughals. It is said that the Maharaja of Jaipur was disconcerted with the errors of the instruments in the observatory and took upon himself the feat of amending the errors and making the instruments accurate for recording astronomical phenomena. After the completion of Jantar Mantar, the observatory was functional for seven years. Data of each day was collected and charted and dedicated to the reigning emperor. The name ‘Jantar Mantar' is a colloquial form of the original terms ‘yantar'and ‘mantra'.

The observatory of Jantar Mantar in Delhi is a camouflage of modern art.  ‘Samrat Yantra' or the sun dial is the most imposing instrument in the observatory. The sun dial is a huge structure in yellow with a 27m long arm placed at an angle of 27 degrees. The sun dial calculates the time of a day accurately. There are two pillars that record the longest and shortest day in the year. This instrument is known as the  ‘Mishra Yantra' the other instruments are used to trace astronomical phenomena from other planets and stars. The observatory is a fascinating sight with huge instruments of masonry.

Jantar Mantar is in the heart of the city. Tourists can avail local buses, taxis and auto rickshaws from different points within the city. Many hotels arrange for conducted tours for tourists.Get more information on other tourist attractions in Delhi while browsing our site and for online booking, please fill in the form given. 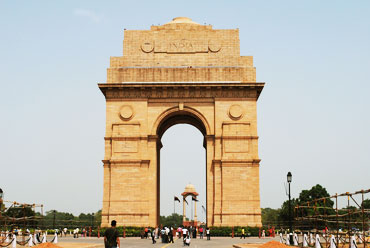