The Corbett National Park is a primal jungle as Rudyard Kipling put it. Despite extensive tourism, the park has managed to retain its primeval ambience, where man must walk timorously, in awe and with a strong sense of his own insignificance. more pictures.

Set up in 1936 as India's first national park and possibly the finest, the Corbett National Park was first delimited in consultation with that great hunter and conserver, Jim Corbett. The park spans across some 920.9 square km at an altitude of 600 to 1100 metres about the foothills of the western Himalayas in the districts of Nainital and Pauri Garhwal in the state of Uttaranchal (formerly part of Uttar Pradesh). In its eventful 64-year life, it has grown considerably in size and now includes the Sonanadi Wildlife Sanctuary as a part of its 1,319 sq km of reserved forest area.

As with the rest of the country, there are three well-defined seasons at the Corbett National Park-winter from November to February, summer from March to June and the rainy season the rest of the year. Corbett is closed for public from June 15 to November 15.

The main feature of this ridged valley is the Ramganga River, running broadly west by south west, the catchment streams of which vivisect the land into numerous little ridges and ravines. The topography is therefore very varied-the streams forming islands of 'sheesham' trees, the ridges being thickly foliated with 'sal' trees and the pastures carrying long grasses. In this variety of habitat abounds wildlife of enchanting beauty including 50 mammals, 577 birds and at least 25 reptiles. The river teems with mahseer, gharial, mugger and flocks of cormorants.

Project Tiger was inaugurated here on April 1, 1973. The center of tourist activity in the park always continues to be Dhikala, at the heart of the core area. Here, substantial residential accommodation has been built along one end of a large grassy plateau perched on the edge of the cliff bordering the Ramganga reservoir.

Apart from tigers (90 in number in 1984), leopards as well as lesser cats such as the leopard cat, jungle cat, and fishing cat are also found here. The sloth bear, Himalayan black bear, dhole, jackal, yellow throated marten, Himalayan palm civet, Indian grey mongoose, common otter, porcupine, black naped hare are the other attractions of this area. It is possible to see elephants all over the park.

Four species of deer are found here. These are the barking deer, para, kakkar, and the well known spotted deer chital. The goat antelopes are represented by the ghoral.

There is a lot for the bird watching opportunities in this park as it has over 580 species of birds. Most of the water birds are the migrant variety, and arrive in winters. Some of these are the graylag, bareheaded goose, duck, grepe, snipe, sandpiper, gull and wagtail. The residents include darters, cormorants, egrets, herons, the black-necked stork and the spur winged lapwings.

The reptiles, which are residents of this area, are the rare fish eating, long-nosed crocodile gharial, and a few species of turtles and tortoises. The Indian python, viper, cobra, krait and king cobra also inhabit the Corbett National Park.

The national park offers invaluable experiences for adventurous and serious-minded wildlife-buffs, photographers and anglers. It is advantageous to have one's own vehicle here. Walking in some areas is permitted, but only when accompanied by a guide. Elephant rides for wildlife viewing, in the mornings and evenings, can be booked in the Dhikala complex.

In the vicinity of the Corbett National Park are the wildlife sanctuaries like Rajaji National Park and Dudhwa National Park. Lucknow is the capital of Uttar Pradesh and one of the major tourist destinations in the country.

By Rail - Ramnagar is on the broad gauge track from where the road transport options have to be availed to reach the park. 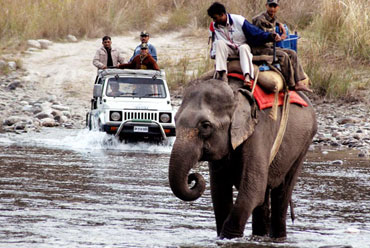 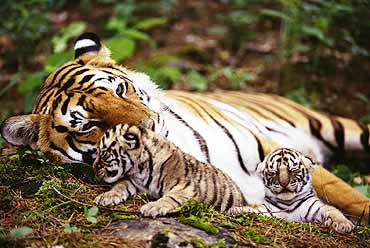 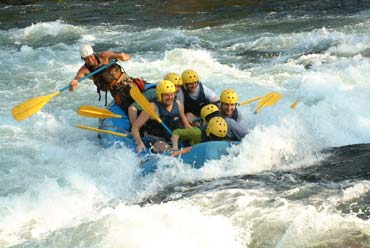