Bandhavgarh National Park is located in the Umaria district in the state of Madhya Pradesh.

At Bandhavgarh you can find moist deciduous forest, as at Kanha National Park. At higher altitudes, the flora tends to move towards mixed forests. With the highest density of tigers, Bandhavgarh is one of the most important wildlife sanctuaries in India for the wildlife preservers and enthusiasts. The park is also home of the white (albino) tiger. There are a number of other rare species moving around in Bandhavgarh National Park like sloth bear, gaur, sambar, chital, muntjac, nilgai, chinkara, and wild pigs. There are also interesting cave shrines scattered around the park, with Brahmi inscriptions dating from the first century B.C. You can visit the remains of the Bandhavgarh Fort believed to be 2,000 years old.

Built by the Maharajas of Rewa, Bandhavgarh Fort is located well within the Bandhavgarh National Park. The fort is situated at an altitude of 800 m and gives panoramic view of the wildlife preserve as well as surrounding countryside. There is a small stream call Charganga that flows besides the fort. In the way to the fort you can also see a number of statues and temples, the most famous of all is a rock-cut statue of Lord Vishnu. 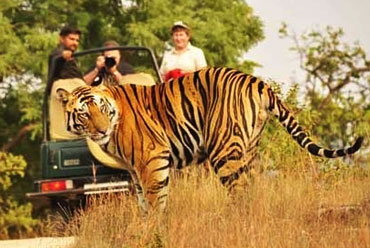