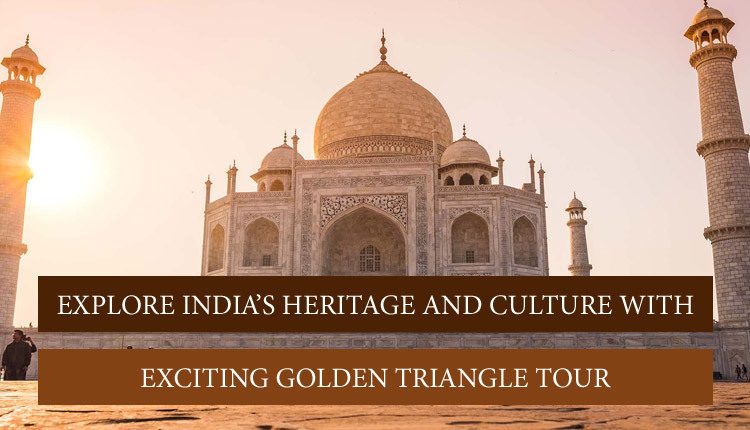 A large part of India’s heritage and culture can be witnessed by embarking on a Golden Triangle Tour. The Golden Triangle is so-called because it consists of three cities, namely, Delhi, Jaipur and Agra. Having witnessed glorious periods of history, these cities are gifted with several historical structures which are architectural marvels.

If you want to explore the heritage and culture of India, there is no better way than opting for a Golden Triangle Tour with your family and friends. Every city offers an experience different from the other. If Agra prides itself on the Taj Mahal, Delhi holds its own with its old-world charm. Then there is Jaipur, which is the very embodiment of royalty. This blog tells you the best way to explore India’s heritage and culture with exciting Golden Triangle Tour.

When should you take the Golden Triangle Tour?

The best time to take the Golden Triangle Tour is between the months of November to March. The cool and pleasant weather during this time provides the best opportunities for sightseeing and exploration. The summer season brings with it excruciating heat while the monsoons cause several inconveniences to the traveler.

Route of the Golden Triangle Circuit

Delhi, one of the top cultural cities in India, is the starting point of the Golden Triangle Tour. Having served as the capitals of the Mughals and the British, the city seems to be stuck in two different time periods. One part of Delhi, fondly referred to as Old Delhi, showcases its old-world charm. Its lanes of mazes and by-lanes consist of eateries with cuisines dating back to the Mughal-era. This is the Delhi that creates a sense of nostalgia within you.

In contrast, New Delhi bears strong imprints of the colonial-era, while being as modern a city as any. It bustles with energy and excitement. Swanky malls and multiplexes are the favorite hangouts of youngsters, while every small occasion is a cause for vigorous parting and celebration. The latest car in town is often seen dashing through its streets, while men and women can be seen displaying the latest fashion trends in town.

Let us now tell you the things that make Delhi so popular both among the tourists as well as the locals. 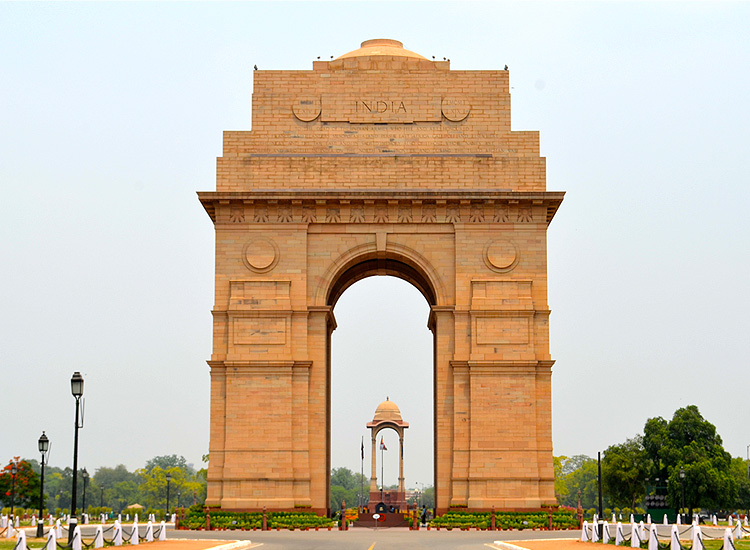 India Gate stands as a commemoration to the 70,000 soldiers who sacrificed their lives fighting for the British in World War 1. The memorial, which stands at a height of 42m, was designed by Edward Lutyens. Under the arch of the India Gate, you can find the “Amar Jawan Jyoti”, an eternal flame which burns day and night and reminds everybody of the soldiers who sacrificed their lives in the Indo-Pakistan War of December 1971. You cannot help but be moved by this sight. During the night, when it’s floodlit, its beauty is magnified several times over. India Gate is surrounded by beautiful lush lawns which are popular picnic spots. 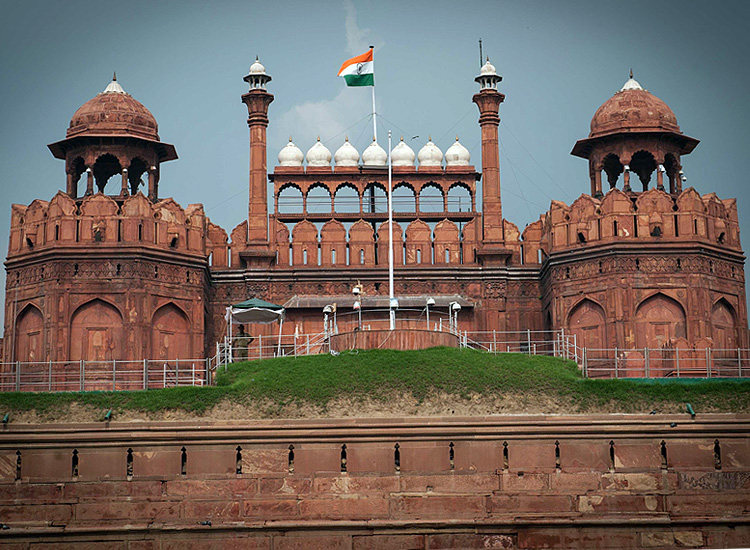 Red Fort, standing at almost 108ft, is a colossal piece of architecture. A UNESCO World Heritage Site, it’s called the Red Fort because of its enormous walls which are built from red sandstone. The Prime Minister of India delivers a speech from its ramparts on the occasion of Independence Day every year. This 17th century Mughal monument is a symbol of the power and glory commanded by the Mughal Empire during its heyday. The Red Fort is home to a number of significant structures including the Drum House, Hall of Public Audience, white marble hall of Private Audience and Royal Baths. Visitors can also enjoy an evening light and sound show. 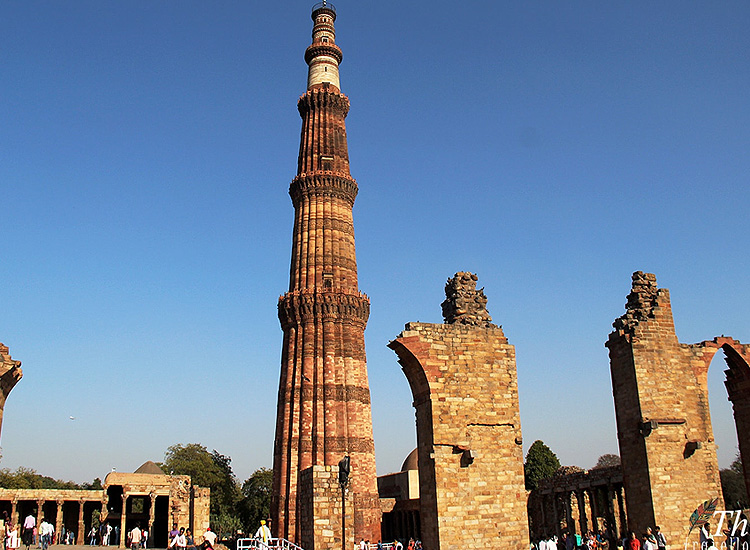 There are several UNESCO World Heritage Sites in Delhi, and one of them is the Qutub Minar. Touching the skies at an incredible height of around 240ft, it makes for an amazing sight. This splendid monument is located in Mehrauli in the southwest district of Delhi, and is surrounded by other equally important historical monuments. Two of these are the Quwwat-ul-Islam Mosque and Iron Pillar of Delhi.

Its said that encircling the tower with your hands while standing with your back to it fulfills any wish that you make. Qutub Minar was built by Qutab-ud-din Aibak, who could only complete the basement. His successor, Iltutmish, added three more stories while Firoz Shah Tughlaq constructed the fifth and last story. 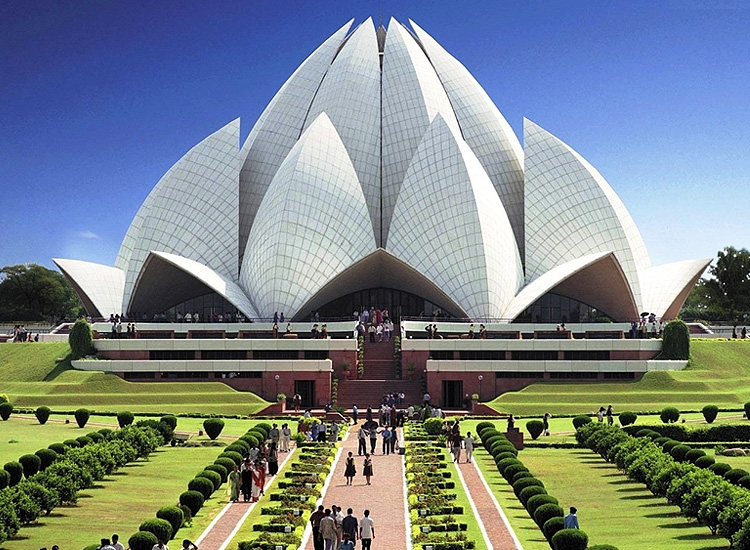 The Lotus Temple catches your attention at first sight with its unique architecture. Built in the shape of a lotus, it’s the last of the seven major Bahai temples around the world. Lotus Temple is built of pure white marble by the architect Furiburz Sabha. The lotus was chosen as the symbol because its common to the religions of Hinduism, Buddhism, Jainism and Islam. Nine pools of water surround the petals, which are lit up in natural light. 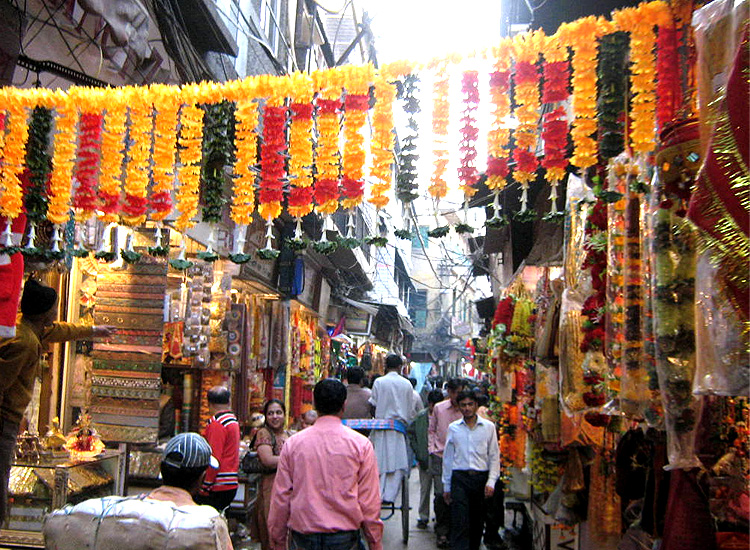 If shopping in Delhi is what you are after, then make your way to Chandni Chowk. Its narrow lanes are lined with shops selling spices, textiles, jewelry and every other kind of item which catches your fancy.  This market has been around for almost three centuries and was once visited by merchants from China, Turkey and Holland. Some of the famous places to check out are Dariba Kalan (for its pearl, gold and silver jewelry), Khari Baoli (for spices), Katra Neel (for all kinds of fabrics) and Bhagirath Palace (Asia’s largest market for electrical goods). If you happen to be a book lover, head to Nai Sarak and Daryaganj Book Makret, two of the best places for book lovers in Delhi. 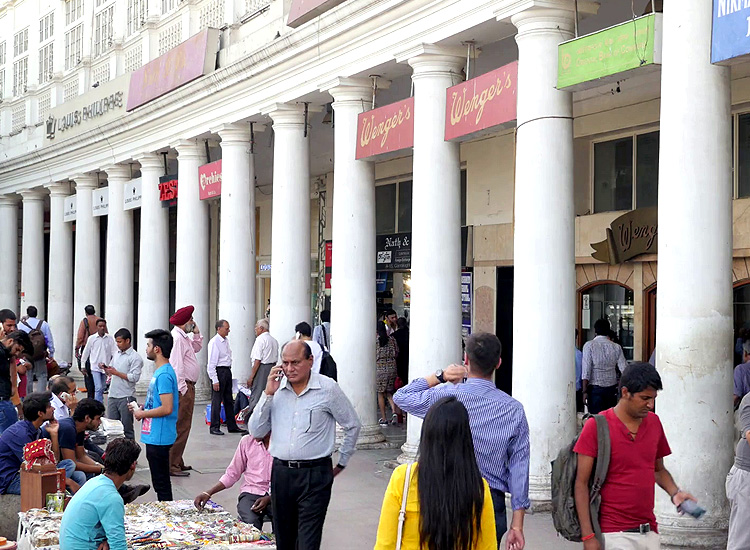 Connaught Place is counted amongst the most popular tourist attractions in Delhi. This where the city’s youngsters, the elderly, the hipsters and the intellectuals hang out. At the time it was established, this circular market was the largest of its kind in India. The British, who built the market, believed that its horseshoe shape would be convenient and profitable both for the shopkeepers and the customers. The market here consists of two circles, with the Inner Circle consisting of Blocks A to F. The famous showrooms include Allen Solly, Bentley, Johnson Watch Company, Pepe and Louis Phillipe and Nike, among others. The outer circle, which consists of Blocks G to P, consists of showrooms like Lacoste, Omega, Rado and Digjam, among others.

In Agra, you come across the magnificence, splendor and majesty of the Mughal Empire in its heyday.  However, the prime attraction in this city is the Taj Mahal, a vision which seems to have come to life. Built on the banks of the Yamuna River (which was then as pure as ever),  Agra was the capital of the Mughal Empire for a long period of time, until Shah Jahan shifted it back to Delhi.

Explore the culture of Agra with heritage and cultural tour packages in India. Throughout the city of Agra, one comes across fabulous architectural specimens dating back to the Mughal-era such as Agra Fort, Akbar’s Tomb, Tomb of I’timād-ud-Daulah and Jama Majid, besides others. Admire the calligraphy and the other exquisite details on these majestic monuments. Making your way among the bazaars of the old city (a confounding sight of unruly traffic, tangled wires overhead and lots of people) can be both daunting and exciting.

What are some of the famous sights in Agra? Let’s find out. 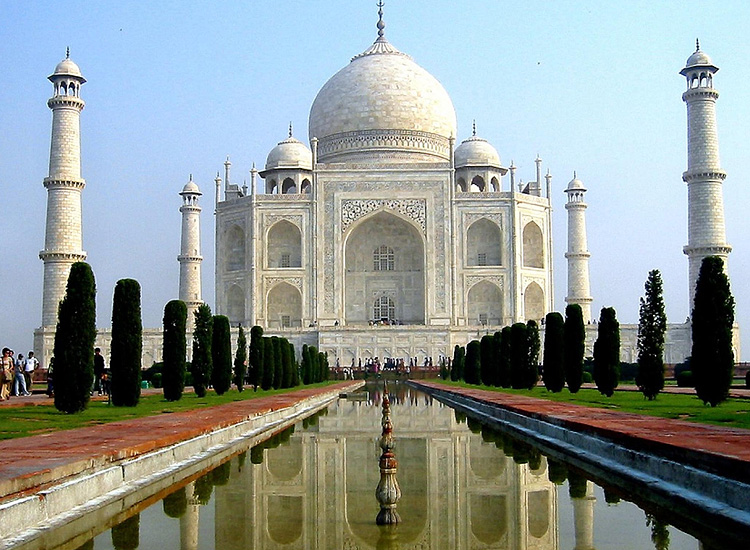 The beauty of  Taj Mahal, a UNESCO World Heritage Site, was perhaps best described by the Nobel Laureate Rabindranath Tagore when he described it as a “teardrop on the cheek of time”.  Built by the Mughal Emperor Shah Jahan for his wife Mumtaz Mahal, it enchants the visitors with its aesthetic proportions, slender minarets and central dome. The Taj Mahal appears surreal, however, in the glow of the full moon. The four minarets circling the main dome are pointed slightly outward, so that, in case of an earthquake, they fall outwards, thereby not causing any damage to the main structure. Visit Taj Mahal with these customized packages. 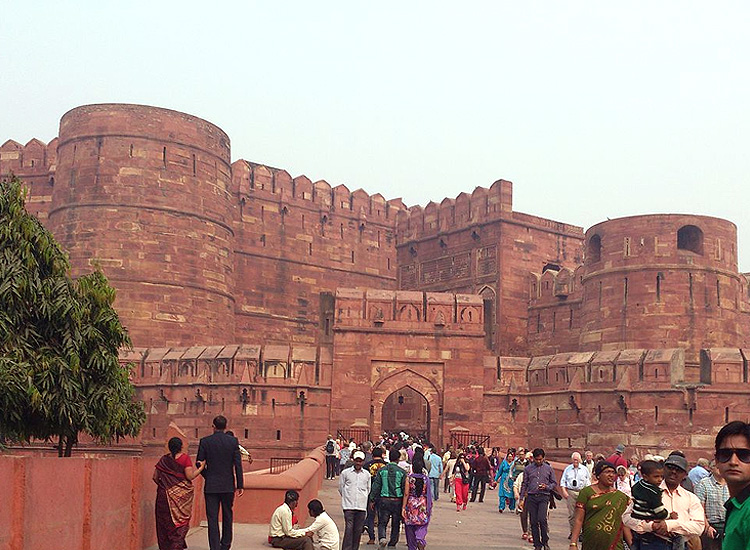 Agra Fort is another UNESCO World Heritage Site that captivates onlookers with its enormous size and grandeur. An interesting fact associated with it is that it’s also known as Red Fort or Fort Rouge due to the dominance of red sandstone in its architecture. Inside its premises, you will come across a number of exquisite buildings including Diwan-i-Aam, Diwan-i-Khas, Moti Masjid, Musamman Burj, Khaas Mahal and Sheesh Mahal. 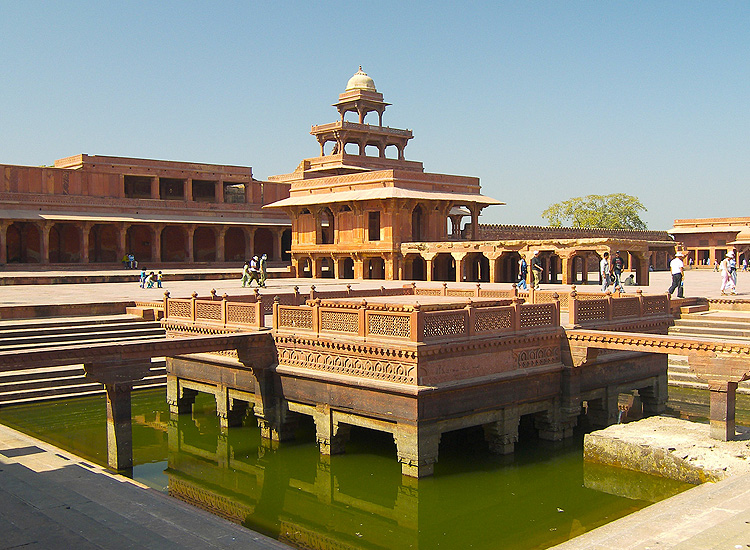 Fatehpur Sikri, a UNESCO World Heritage Site, is another outstanding example of Mughal architecture. It was also the first planned city of the Mughals and served as its capital for a very short period of time. Most of the famous Mughal institutions like the “Ibadat-Khanah”, “Din-i-Ilahi”, “Tarikh-i-Ilahi” and “Jharokha-Darshan” can be found here. Exploring the various buildings also gives us an idea of the Mughal system of administration along with the social structure existing in that era. If a popular legend is to be believed, Fatehpur Sikri was built as a tribute to the great Sufi Saint Sheikh Salim Chishti.

You know that Jaipur is also called the Pink City, but have you ever wondered, why? In 1876, the Prince of Wales visited India on a tour. The color pink was commonly associated with hospitality then, and, to show his sense of hospitality for the arriving Prince, Maharaja Ram Singh of Jaipur painted the entire city pink.

Apart from that interesting historical fact, Jaipur is all about opulence, and its numerous palaces, forts and other structures reflect just that. It is one of the cities (the two others being Delhi and Agra) that comprise the Golden Triangle. The city also hosts numerous festivals like the Kite Festival, Gangaur Festival, Dhulandi Festival and the Jaipur Literature Festival, which attract a large number of tourists throughout the year. The various tourist attractions in Jaipur offer numerous options for sightseeing, adventure and exploration. Ever wanted to try a hot-balloon ride? You can try that here. 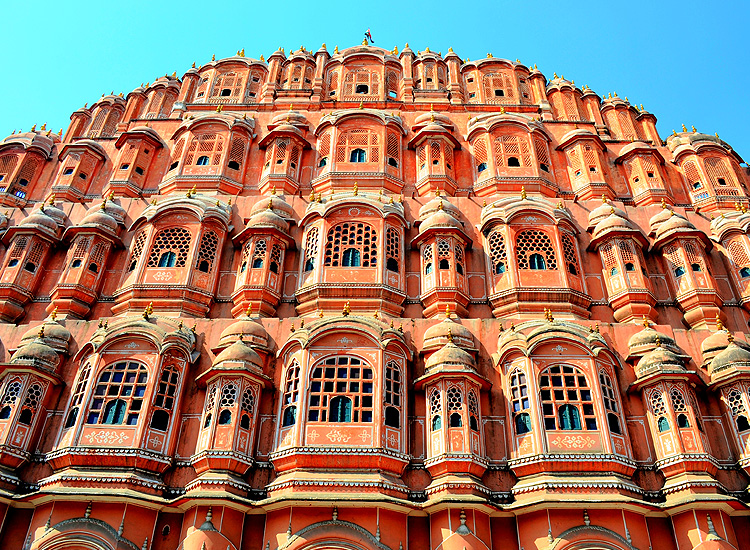 Hawa Mahal, which literally translates to Palace of Winds, was built in 1700 by the poet-king Sawai Pratap Singh. Apart from serving as his summer retreat, it served as the place from where the ladies of the royal household watch the everyday life on the streets without being observed. It’s a beautiful combination of Hindu-Muslim architecture, and one of the most iconic landmarks of Jaipur. As a visitor, you can get lovely views of the nearby surroundings by climbing to the top. 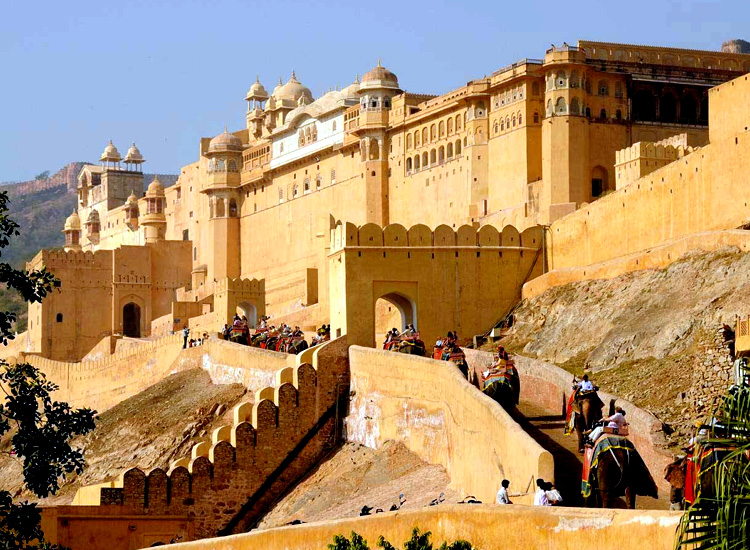 One of the most popular forts in Rajasthan is the Amber Fort. Amber, or Amer, was the capital of Rajasthan before Jaipur, and its exquisite beauty simply makes it one of the places which you should not miss during a holiday in Rajasthan. The fort was built in 1592 by Raja Man Singh, and has been built from red sandstone. However, though the fort’s exteriors may not impress you greatly, its interiors consist of beautiful buildings like the “Diwan-i-Aam”, “Sheesh Mahal” and “Sukh Mahal”. Amber Fort is a wonderful amalgamation of Hindu and Muslim architecture. 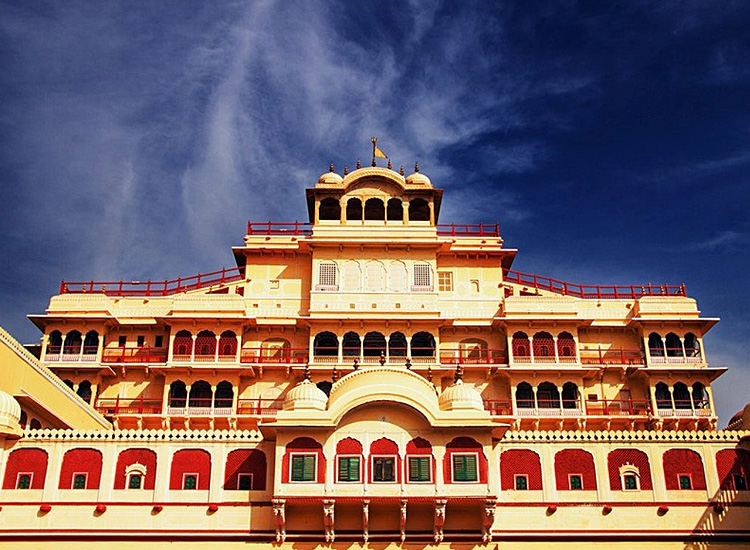 When you visit the various attractions in Jaipur with Golden Triangle Tour packages in India, check out the City Palace. This structure reflects the Rajput royalty at its best. Built by Maharaja Sawai Jai Singh II, its home to several buildings that are a beautiful blend of Mughal and Rajput architecture. Some of the magnificent buildings inside the City Palace complex are Mubarak Mahal (the palace of reception), Maharani’s Palace (the palace of the queen) and Maharaja Sawai Man Singh II Museum (which display royal costumes, Benares silk saris and folk embroidery, besides others). 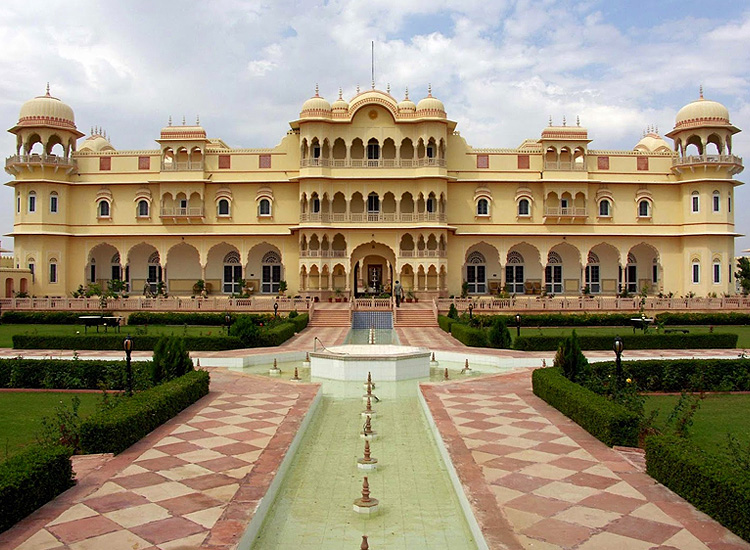 Nahargarh Fort forms a perfect backdrop to the city if Jaipur. Seated comfortably on the ridge of the Aravalli Hills, it was constructed during the reign of Jai Singh in 1734 before being expanded in 1868. Its premises is home to Madhavendra Bhawan, the summer destination for members of the royal family. It’s a great place for sightseeing and exploration, and getting a glimpse of the royal family which it once hosted.

Take a look at the famous Golden Triangle tour packages and their extensions which you can book with us and make your holidays memorable: