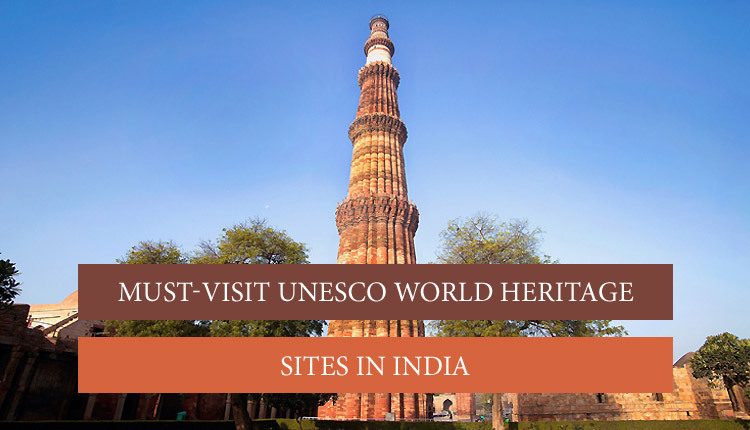 Travel across the length and breadth of India. What is it that draws your attention the most? It’s the landmarks, those massive monuments standing in the form of forts, caves and palaces that remind us of the glorious legacy and history of this country. Nature too, has smiled abundantly on this land, and going from one corner of the country to the other lets you witness the diversity and richness of its landscape.

At present, India is home to 36 UNESCO World Heritage Sites, each of which is a repository of history and culture, or simply a wonder of nature. While one may be an architectural marvel dating back to ancient times, the other may surprise you with its raw beauty. For tourists, these 10 must visit UNESCO World Heritage Sites in India can be an enthralling experience, with each monument or cave or wildlife sanctuary offering a new experience.

Taj Mahal stands as a symbol of eternal love and sacrifice. This world heritage site, and one of the “wonders of the world”, was built by Mughal emperor Shah Jahan in memory of his wife, Mumtaz Mahal. On a full moon day, its beauty verges on the surreal, while on a winter morning when its enveloped in fog, it appears to be suspended in mid-air.

During the evenings, this fabulous monument, built in white marble, is bathed with the sun’s rays, and appears particularly spectacular. The main gateway to the mosque is decorated in calligraphy with verses from the Holy Quran. The garden, spread out in front of the Taj Mahal, is built in Islamic style and represents Paradise in Islam. The four minarets of the Taj Mahal also arouse a lot of interest. They are slightly inclined outwards so that in the event of an earthquake, they fall on the gardens and not on the mausoleum itself.

[ Plan a visit to Agra with these well-planned tour packages ]

Group of Monuments at Mahabalipuram

The Group of Monuments at Mahabalipuram are one of the UNESCO World Heritage Sites in India, and display the levels of architectural excellence achieved in the past. Located about 58km from Chennai in the Coromandel Coast of the Bay of Bengal, these temples were built under the rule of Pallava rulers.

One striking feature about these temples is that they are carved out of rock and are an important achievement in the history of rock cut architecture in India. These group of monuments include Descent of the Ganges, India’s largest open air bas relief. Some of the other attractions worth checking out are Arjuna Ratha, Draupadi Ratha and Pancha Rathas, besides others. Each of these monuments seem to surpass the other in terms of their aesthetics and grandeur.

[ Plan a holiday in Mahabalipuram with these best  customized packages ]

The hill forts in Rajasthan are counted amongst the most amazing forts in India, and rightly so. Seen from a distance, their enormous size evokes sheer admiration. There are six majestic hill forts are located in Chittorgarh, Kumbhalgarh, Sawai Madhopur, Jhalawar, Jaipur, and Jaisalmer. They bear testimony to the power, fame and glory enjoyed by the Rajput princely states which prospered in this region from the 8th to 18th centuries.

Within its defensive walls, one comes across major urban centers, trading centers, palaces, temples and other buildings which existed there even before the construction of the fort began. These forts took advantage of the natural defenses provided by the landscape comprising of dense forests, rivers and hills. Some of the water harvesting structures which existed in these forts are still in use today.

One of the most popular tourist attractions in Madhya Pradesh is the Khajuraho Group of Monuments. These ancient temples display some of the finest art in the world. These temples were built between 950-1050 AD by the Chandela Dynasty, and display various forms including wrestling, royalty, kinship, meditation and spiritual teachings, besides others.

[ Book  Khajuraho  holiday  Packages with us ]

It was under the Chalukyan rulers that temple architecture went through various kinds of experiments and achieved newer dimensions. The Group of Monuments at Pattadakal stand as a testimony to that fact. The temples which stand at Pattadakal (located in the Bijapur district of Karnataka) are an amalgamation of the Rekha, Nagara, Prasada and Dravida Vimana styles of architecture.

The oldest temple is the Sangamesvara built by Vijayaditya Satyasraya, with the other notable temples being Kadasiddhesvara, Jambulingeswara and Galaganatha. What catches your attention as you explore these temples are its delicate details and aesthetical proportions. Their ancient appearance enhances the entire experience for a tourist.

Group of Monuments at Hampi

The Group of Monuments at Hampi, for lack of a better word, are one of the foremost attractions in Karnataka. Having once served as the capital of the city of Vijayanagara, it still displays the levels of perfection achieved in architecture during that period. Everywhere your eyes go, you see the remnants of that glorious period in the form of temples, palace and other structures.

Virupaksha Temple is one of the many attractions here. With its 9-story tall gopura, this is where Lord Shiva is believed to have marry Goddess Parvati. There are the long bazaars which once served as great centers of commerce. Vijaya Vittala Temple, which assumes a golden color under the setting rays of the sun, is another great attraction with its 56 musical pillars. The Lotus Mahal, the Royal Enclosure, the Elephant Stables and the Hazararama Palace Temple, besides many others. Hampi holds in store a lot of opportunities for exploration and sightseeing.

Sanchi is most famous for its Buddhist stupas, those famous hemispherical structures which contain the relics of Gautama Buddha and his followers. These stupas were built on the orders of Emperor Asoka in order to preach and preserve the Buddhist philosophy.

The grandest structure of is undoubtedly the Sanchi Stupa. Standing at almost 42ft, it’s a marvelous sight to come across. The other stupa, which sits on top of the hill, is also as amazing architecturally as the first. While here, look out for the Great Bowl which was used to distribute foods to the monks. In close proximity to the Great Stupa lie the relics of Buddha’s two disciples: Sariputta and Mahamogallena. The other sight worth exploring is the Gupta Temple, the earliest known example of temple architecture in India.

Kaziranga National Park is one among the 10 must-visit UNESCO World Heritage Sites in India. Its home to about 35 species of mammals apart from other species which are considered endangered. Here, you come across fascinating sights such as the greater one-horned rhinoceros with its enormous body and horn, herd of elephants and wild buffaloes with their magnificent horns. This park is also home to various kinds of deer like the Hog Deer, Sambar Deer and Swamp Deer.

Kaziranga also boasts a rich avifauna. Watch closely and attentively, and you may spot a Pallas fishing eagle, along with hornbills and cranes. On your lucky day, you may even spot tigers. If the fauna catches your attention, so does the flora. The unique habitat is a mix of wetlands and grasslands, woodlands, canebrakes and highlands. It also offers scope for one of the best jungle safari destinations in India.

[ Visit this national park with these customized packages ]

Keoladeo National Park, once known as the Bharatpur Bird Sanctuary, is famous for being one of the world’s most important bird breeding and feeding grounds. It was declared a national park in 1982 before being declared a World Heritage Site by UNESCO in 1985.

Over 370 species of birds and animals including the basking python, deer, painted storks and nilgai, besides others, can be found in this park. The credit for the creation of Keoladeo National Park goes to Indian ornithologist and naturalist Salim Ali who used his influence to gather government support for the park. The Siberian Crane, which is quite rare and hard to spot, is housed in the park in large numbers. Visitors can also enjoy treks on foot, cycle or rickshaws.

[ Browse through our list of customized Bhartpur tour  packages ]

Places Which You Should Not Miss During A Holiday In Rajasthan