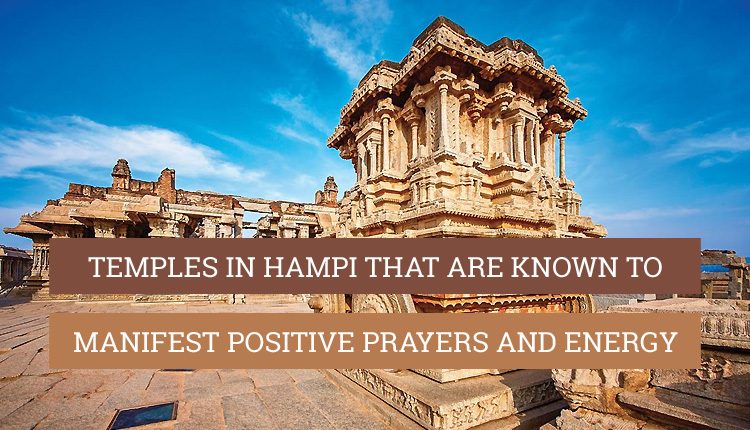 Immerse yourself in the architectural brilliance of Karnataka by exploring the famous temples in Hampi. Discover the relics, edifices of Hampi dating back to the glorious Vijayanagara Empire. Learn what happened to Vijayanagara Empire after it succumbed to the attack of five Deccan Sultans – Bidar, Bijapur, Ahmednagar, Golconda, and also Berar. This dominant empire ruled South India and beyond in the erstwhile era until it was looted and burned for 5 to 6 months.

Hampi is a historically rich temple town located near Hospet taluk in Karnataka state. Hampi is a traveler’s bliss and was once the capital of the Vijayanagara Empire. Its ruins and temples stand testimony to the prestigious Vijayanagara Empire which was touted to be the richest empire of that time.

The town of Hampi is divided into two sections on the banks of the Tungabhadra River. One side is embraced with temples, and ruins of erstwhile Vijayanagar City while the flip side is dotted with small shacks and cozy cafes. To get from one side to another, a boating service is available.

Coming to the point, temples in Hampi are famous because most of them endorse the medanta mythology as per Hindu manuscripts. For more than 200 years from the mid 13th century, the cosmopolitan legacy of the Vijayanagara Empire has flourished till now which could be best observed on a temple hopping trip to Hampi.

Each of the Hampi temples has its importance and most of them are built as per the Hindu legacy. The Vijayanagara style of architecture is heavily based on natural resources. The primary material used to design the temples in Hampi was granite, and softer schist rock, suitable for ornate carvings.

5 Temples in Hampi You Must Visit Once in Your Life

Do you know what makes temples in Hampi famous? Well, dozens of shrines in Hampi have been inspired by India’s two great epics – Ramayana and Mahabharata. Furthermore, the Hampi temples have magnificent pavilions, majestic pillars, paintings, and carvings depicting the glorious past of Hampi.

Unlock a soul-stirring experience to manifest peace and calmness at these 5 temples in Hampi. Put on your reading glasses now!

Entry Fee: Free for all

If you are a serious admirer of Lord Shiva, you can’t miss a visit to Virupaksha Temple. Also called Pampapathi Temple, the shrine has three towers within its boundaries. Inside the temple are small shrines dating back to the 12th century. Virupaksha Temple is the intriguing mix of Jain and Hindu architecture and is amongst one of the many Pattadakal Temples that spread to almost every region of Karnataka. 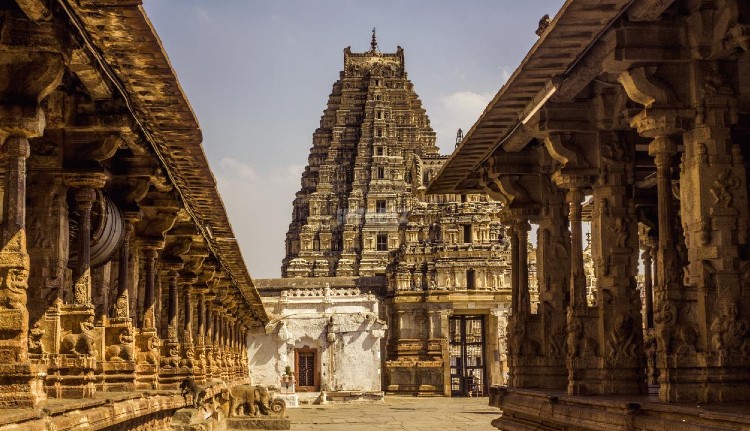 It was built as per the South Indian style architecture in the 7th century on the banks of the Tungabhadra River. The intriguing history and glory of this temple have made it enlist itself in the list of UNESCO World Heritage Sites. On the temple walls, you will come across flawless stone inscriptions which display the rich heritage and carvings of Lord Shiva and God Vishnu.

Do you know Virupaksha Temple is the only shrine of Hampi which was spared during the sack of Hampi? There are many theories or folk tales associated with it out of which the two are very common. The first one states that Virupaksha Temple was not built under the reign of the Vijayanagara Empire. Instead, it was originally built by Chalukyas of Badami. And thus, when Muslim Sultanate went to war with Vijaynagara Empire, they did not destroy this temple.

While the second theory states that Muslim invaders believe that Virupaksha Temple was the devils or shaitan temple. It is because of the flag of Vijayanagara Temple sun, moon, sword, and Varaha, the incarnation of Lord Vishnu. On the flip side, Varaha or pig is haraam in Muslim and thus, the invaders spared Virupaksha Temple.

Although all the year temples of any region are great to visit. But if you want to indulge in cultural and spiritual extravaganza with like-minded people, consider this period:

Advice: No short skirts and shoulderless dresses are allowed for girls. Men should also wear decent clothes, not anything like shorts and funky outfits.

Vijaya Vittala Temple is the same temple that is vastly featured in all the Indian Currencies of 50 INR. The brilliant architecture and unmatched craftsmanship are testimony to the brilliance of Vijaya Vittala Temple. The Chariot-shaped temple, intricate carvings, and 56 SaReGaMa pillars are the highlights.

You will come across the rhythm of SaReGaMa on a guided trip to the temple when it’s hit with the sandalwood stick. The temple dates back to 1422 – 1446 A.D. under the reign of King Devaraya II of the Vijayanagara Empire. 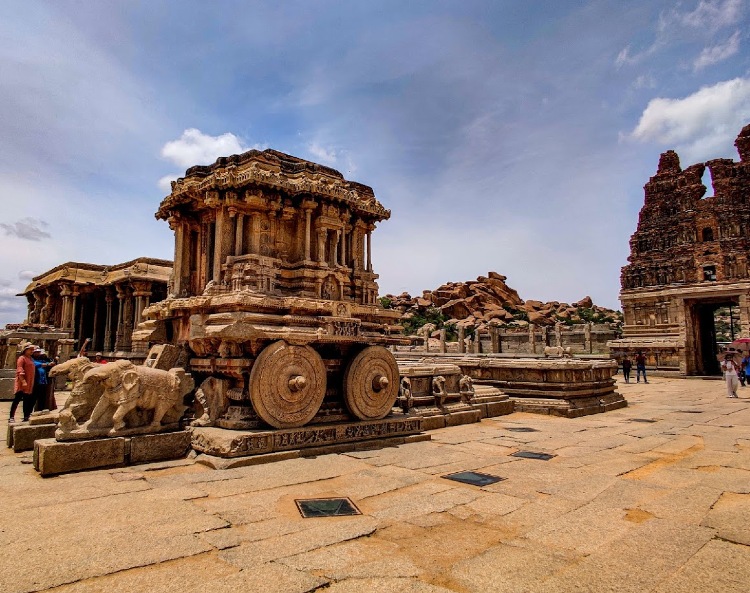 Vijaya Vittala Temple is dedicated to Lord Vishnu in his Vitthala form and according to legends, it was his resting place in Hampi. So when are you planning to visit the place which has been featured in the new 50 INR Indian currency? The main temple complex from the entry gate is around 1 kilometer (approx.) away from the parking space. You can take a ride in battery cars to reach the complex.

Note: Children below 15 years of age can enter for free. Also, expect to pay an additional 25 INR (approx.) for the video camera.

Advice: The short hike is a bit challenging for senior citizens. Make sure they take several halts. Also, keep yourself hydrated as there is no stall on the hiking route.

Fight against all the negativity around you with the blessings of Monkey God. Call him Pawanputra, Maruti, and Kesari Nandan, manifest protection and blessings in abundance. At Yantrodharaka Hanuman Temple. Synonymous with Monkey Temple, legends state that it is the same temple where Lord Hanuman was born. Since the temple is located at Anjanadri Hill, you must hike a little to reach it. Nearly 500 steps (approx.) are required to reach the temple. 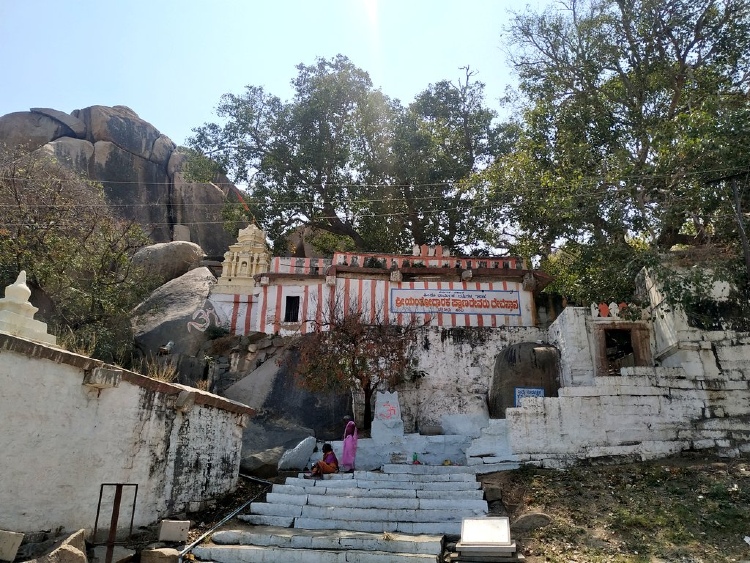 Here you will come across many old age devotees who challenge their adrenaline to climb up with devotion and energy. However, one can take several halts to regain energy. Inside the Yantrodharaka Hanuman Temple, there is a deity of Lord Hanuman installed. According to the locals, Sri Vyasaraja was the royal priest of the Vijayanagara Kingdom who first installed the statue of Bajrangbali, Lord Hanuman.

The legend which follows this temple is Sri Vyasaraja was the die heart admirer of Lord Hanuman. Therefore, he used to take pictures of Lord Hanuman on the rocks every day with charcoal before offering prayers. Sooner, he realized that the images drawn by him from the last few days disappeared automatically.

The royal priest Sri Vyasaraja observed the same care for 12 days. Afterward, he asked Lord Hanuman to appear in front of him. The Pawanputra appeared and blessed him. Legendary tales have mentioned that Lord Hanuman asked the royal priest of Vijayanagara Kingdom to install him around the rocks in the meditative state.

Note: Get back to your accommodation before the sun turns into the moon. Plus, even you can enjoy photography without shedding a single penny.

Advice: Be respectful towards locals and tourists alike who believe in prayers.

Watch the fierce avatar of Hindu God Vishnu sitting on the Sheshnaag i.e the Seven headed snake. Sheshnaag acts as a shelter to Narasimha which translates to half-man and half-lion. He is referred to as the fourth incarnation of Lord Vishnu. When you visit this temple you will find that Laxmi’s Ji idol is also placed along with Narasimha. Lakshmi Narasimha Temple. 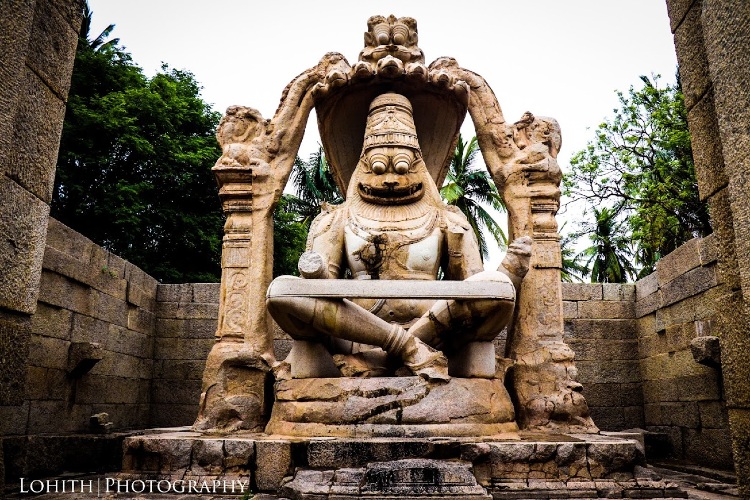 Has got the title of the biggest monolith statue in the Hampi and therefore, it is a must-visit temple in Hampi for spiritual buffs.

According to the tour guides here, it is believed that the statue is placed in 1528 A.D. Furthermore, it was placed under the kingship of Krishnadevaraya, the ruler of Vijayanagara during that time.

Advice: Don’t become an artist by drawing anything on the hill temple complex walls. Otherwise, you will be penalized with a hefty amount.

Even according to the locals and tour guides here, this is the sample place where Lord Shiva performed penance before marrying Pampa – the consort of Parvati. 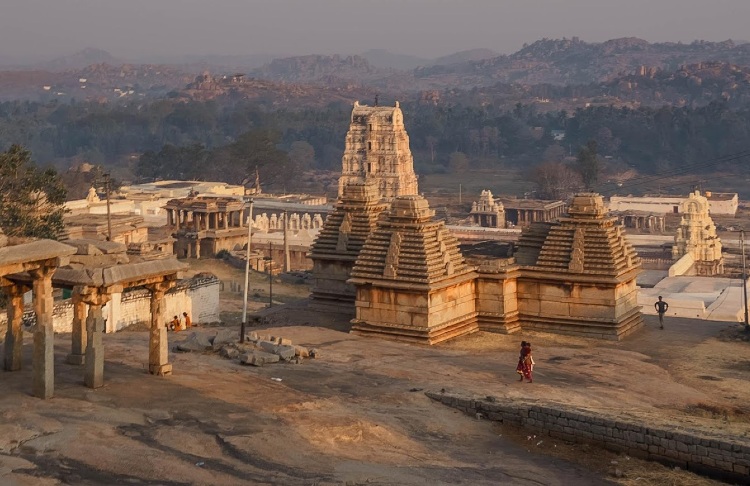 And there you have it, folks! Keep this list of famous temples in Hampi handy if you want to embrace profound serenity and attain a heightened solace on a trip to Karnataka.

A writer at heart, and passionate traveller by choice. Pair of eagle eyes I have, when it comes to copywriting. I keep it real so readers can stay relevant. Calm your travel lust by flicking through Indianholiday.com. Read blogs to awaken your WANDERLUST wisdom.