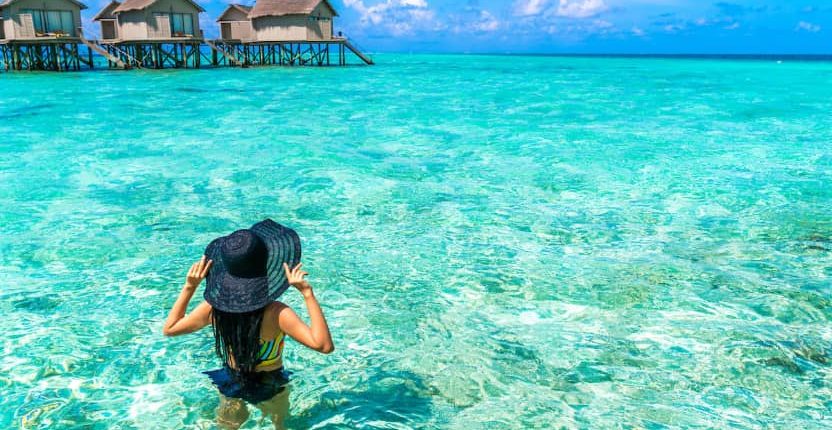 Of course, you have learned much on the web about why the Maldives is a famous luxury destination, which has deepened your fascination with it. But how much do the travelers actually know about the Maldives? For instance, the world’s first underwater cabinet meeting was held in the Maldives. Out of 1,2000 islands, only 200 are inhabited. Some resorts play by their own vacation-friendly rules like barefoot policy. Simultaneously, Maldives produces one ton of white sands annually. Unknown to many, Maldives has earned the Level 2 threat level tag from the US State Department. Are you still wondering why Maldives does live up to every single expectation?

Here we propose some more utterly fascinating facts about Maldives that act as a catalyst in tourism.

1. Maldives Sits on the Equator

This means that sun rays in Maldives get sprinkled at a 90-degree angle. In a nutshell, the sun rays are direct, and hence it is strong; guests must put on some sunscreen to protect themselves from the ultraviolet rays wherever they explore on the island. We strongly suggest you purchase reef-safe sunscreen on your Maldives vacations.

2. Expect to Pay Higher Costs of Even the Shortest Sea Plane Ride 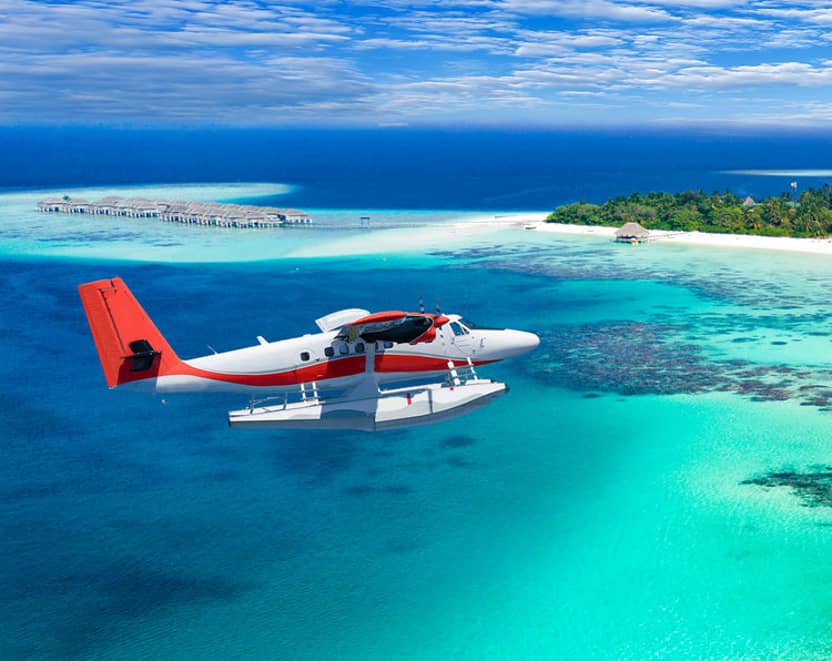 This archipelagic country in the Indian Ocean is made for travelers who want to splash their cash. One such luxury in the Maldives is a seaplane ride. Even the shortest seaplane ride in Maldives from Male is an expensive affair. It is because the seaplane mode of commute in Maldives is taken during the time of private island resort transfer.

Read Also: Places to visit in Maldives for honeymoon

3. Divorce Rate is High in the Honeymoon Capital of Asia

Touted to be one of the best honeymoon destinations in Asia for tropical island vacations – thanks to its sugar sandy beaches, overwater bungalows, Maldives is synonymous with honeymoon capital. But the irony is United Nations reports state that Maldives has the highest divorce rate, almost twice the United States (annually). On average, official records state that the woman in the Maldives has divorced thrice before she reaches 30 years.

Read Also: Things to do in Maldives

Guests can watch the ocean move and recreate the white sandbanks according to their will. Even a few islands’ shapes in the Maldives can be modified and seen. Not many people know about the Maldives, watching sandbanks shifting by nature and being brought back by seasonal currents during the wet season.

5. Shark Tourism in Maldives is on Rise 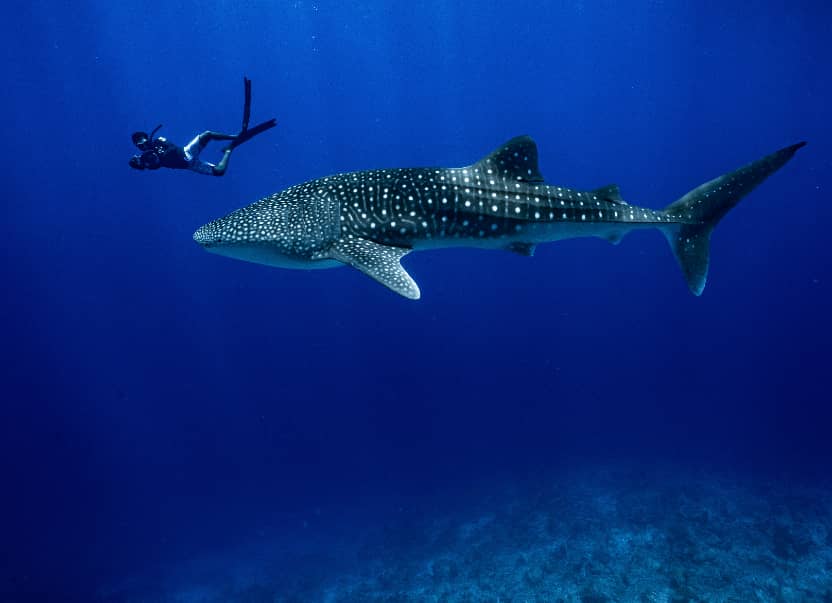 It was 17 October 2009, when the Maldivian President – Mohammed Nasheed asked his cabinet ministers to chat under the sea bed. The meeting was held in Gilifushi to hold international attention regarding the issue of global warming in the island nation due to the rising sea levels.

7. Crime Rates Are Low in Maldives

And hence, Maldives tourism brags itself as one of the safest places on the earth for all types of vacations, including family trips, honeymoon tours, couple getaways, and leisure vacations.

8. Maldives is Melting Pot of Culture

However, the official tourism website of Maldives says that the nation follows Sunni Islam, but you will natives from Sri Lanka, Malaysia, African, and Indonesia avenues. You, too, can discover this heady blend of culture on Maldives vacations. To learn about traditional Maldivian life, visit the local islands in Maldives. African, European, Arabian used the Maldives as the crossroad of trade during the ancient time. 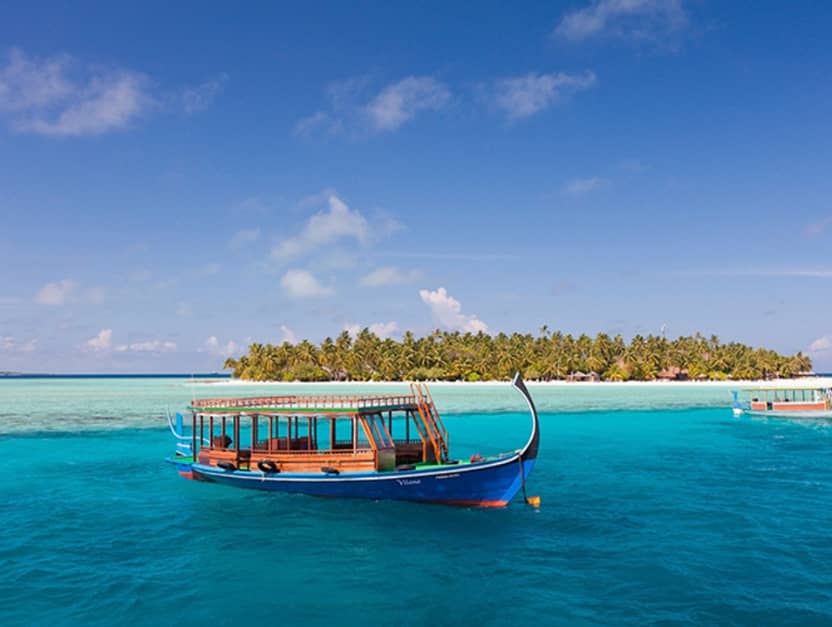 As per the records, Maldives’ famous traditional Maldivian boat (Dhoni) design was inspired by the Arabian Sailing Dhow during the erstwhile days. Those were the same ships used for trading in the Indian Ocean dating back to the 11th century.

10. Not Every Island of Maldives is Inhabited

There are 1,200 islands (approx.) in the Maldives peppered across the Indian Ocean. Some of them are private island resorts, while the rest of them are locally inhabited islands. At the same time, there are many non-inhabited islands in Maldives where tourism is not allowed.

11. Some Maldives Islands Are Artificial

This signifies that not all the islands in Maldives are naturally formed. For instance, Hulhumale Island is a man-made island close to the Male and is often replicated as an artificial island formed by the dumping loads of sands during 2004. Now tourism flourishes here as an incredible coastline, paved roads have been made by the Maldives government.

12. Maldives is one of the Best Places on Earth to Watch Bioluminescence.

It doesn’t matter if someone is a beach lover or not; the views of glowing beaches in the Maldives will definitely inject a shot of wanderlust in the veins of the travelers. Bioluminescence in the Maldives is one of the rarest treats formed due to the chemical reaction in marine living bodies. 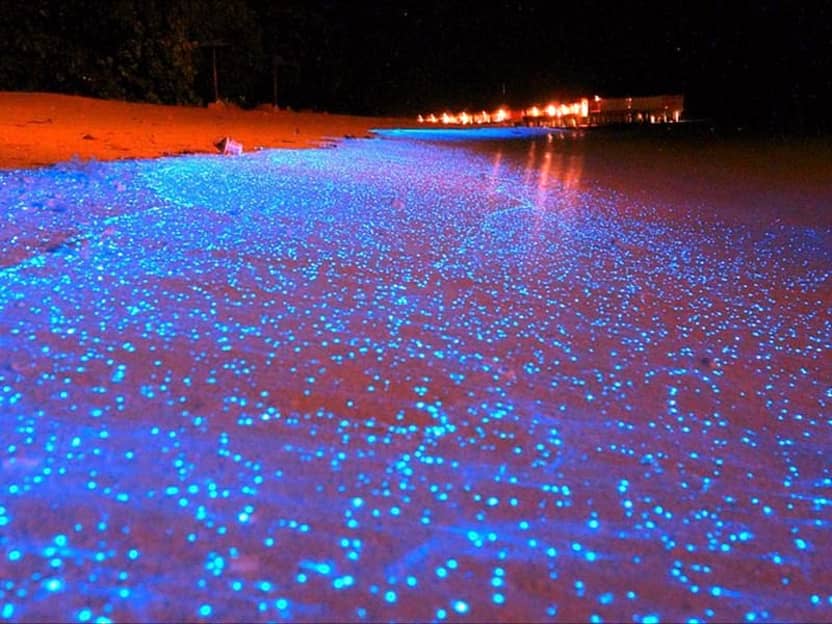 The sight of the night sky falling under your feet is a sight to behold for couples on Maldives honeymoon.

13. Public Affection is A Strict No in the Maldives + No Alcohol.

It is because the population of Maldives is Muslim. You can’t flaunt your swimsuits and display public affection in the local islands of Maldives. Doing the same would land you in trouble. Maldives also prohibits alcohol consumption on the private island resort. Additionally, homosexuality is a punishable offense in this Indian archipelago. However, local islands have bikini beaches, but it is best to switch to private island resorts with no such restriction on boozing and flaunting your bikini suites.

14. Flag of Maldives Has A Story to Tell

The national flag of Maldives has 3 colors – green, white, crescent, red. The first one symbolizes peace, the second one symbolizes Islam religion, while the Red color is the homepage of the freedom fighters of the Maldives whose blood gave independence.

15. There are Two Monsoon in the Maldives

Maldives have two monsoon seasons – southwest and northeast monsoon. The former commences from May to October and September’s wettest month. While the latter one is mild and starts from mid-November to December.

16. Spring is the Best Time for Maldives Vacations

Maldives is a year-round destination because of its tropical climate. But if some want guaranteed sunshine, January to March is the best time to go to the Maldives. These months constitute the spring season that starts and ends from November to April.

17. Wet Season in Maldives is Not Harsh

Yes! Like the neighboring countries, Maldives’ wet season is not that rough. Travelers can enjoy watersports at a safe point since Maldives water is shallow because of the atolls and lagoons.

Bodu Beru is a local music and dance show accompanied by a wood drum made from the coconut tree trunk. The Inhabitants of Maldives believed that the BoduBeru concept was started by the sailors from the Indian Ocean. Almost every second resort in Maldives – mainly local inhabited islands like Male, Hulhumale.

19. Shells Money of Maldives Dates Back to Centuries

Tourists can find cowry shells in Maldives almost everywhere. Cowry shells were the erstwhile mode of money used as currency, mainly in the Indian Ocean sharing countries. These shells now ornate the Maldivian coins, which are a treasure to watch at the various museums in Maldives.

20. The Ancient Maldivian People Used to Build Residences in Corals

One of the astonishing facts about Maldives is that local Maldivians in their heyday used to build their residences in corals. On their Maldives tour package, guests can still see coral houses in the local inhabited islands like Male, Hulhumale, etc.

Another geographical fun fact about the Maldives is that the country has different drinking water. By this, we mean to say that this archipelagic country in the Indian Ocean is highly vulnerable to climate changes, and hence, limited freshwater in Maldives is the talk of the town. Travelers on their Maldives trip will learn about water conservation at Kandolhu Island. The same island makes water safe for drinking through the osmosis process.

23. Marine Wildlife of Maldives is Bewitching

Tourists would be surprised to know that apart from exotic underwater fauna wildlife, there are many land animals too in Maldives. For instance – flying boxes, cats, deers, elephants. While the marine wildlife of Maldives is the real tourism booster is the local islands and private islands. On the other hand, the underwater marine world of Maldives displays clownfish, jellyfish, parrotfish, pink whip rays, and zebra sharks.

24. Maldives On Budget is Possible

You just need to sort your travel plans, accommodation style, number of traveling days and let Tourism of India do the hard work for you! We have some of the best-selling Maldives vacation packages with flights and all-inclusive resort activities right from meals to stay, experiences, and watersports.

There is a lot to learn about Maldives tourism, For instance, tourism in the Maldives opened up around 40 years ago! 99% of the Maldives are swallowed by water.

Maldives is a perfect place to quench those pesky fantasies that demand you to quit your monotonous life and jet set to the tropical island bliss. The private island resorts, local islands, sandbanks, powdery sands, and bright blue water beaches actually live up to the expectations of the honeymooners, family travelers, and leisure travelers.

We hope our list of interesting facts about Maldives tourism gave you a sneak peek into what this archipelagic country is like and what to expect.

If these facts about Maldives fascinate you, share the blog with your friends so that they can learn about this amazing country.

Copywriter with eagle eyes who writes copies backed by market research. Akshay uses the persuasive power of NLP to influence readers. Maybe that’s the reason why Akshay became a writer the way other people became monks and nuns. His approach geeks out on studying the personas of the human mind. Thrill yourself from head to toe by feeding your hunger for more travel-related content written by him.