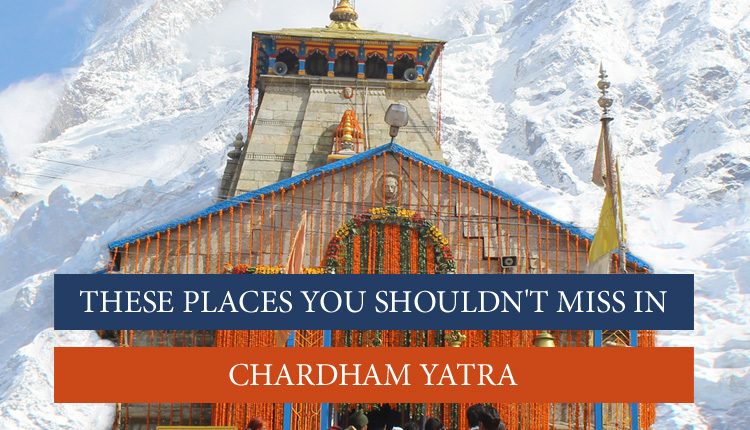 Nestled in the Garhwal Himalayan range in Uttarakhand, Char Dhams are the four holy shrines that are flocked by a large number of devotees from all over the world. The Char Dham Yatra is a sacred sojourn to these pilgrimage sites. In Hinduism, it is believed that the ultimate state of liberation is to attain salvation and a journey to Char Dham takes you one step closer to accomplish this goal. The four temples that comprise the Char Dham of Uttarakhand are Yamunotri, Gangotri, Kedarnath, and Badrinath. These sacred pilgrimage sites are associated with many ancient legends, beliefs, and faith.

If you are planning this holy pilgrimage tour and looking for places to visit Char Dham Yatra, then you are at the perfect place. Here, we have compiled the information about these pilgrimage sites along with the significant details.

Dedicated to Lord Shiva and among the 12 Jyotirlingas, Kedarnath Dham is snuggled amidst the snow-covered mountains. Located near the Mandakini River, Kedarnath Temple is among the holiest Hindu shrines of Lord Shiva. Gaurikund is the base camp of the Kedarnath trek, which is 16 km. You can hire a pony/ palki or complete the trek on foot. In the winter season, the idol shifts to Omkareshwar Temple, Ukhimath and pilgrims can visit there to seek blessings from Lord Kedar. 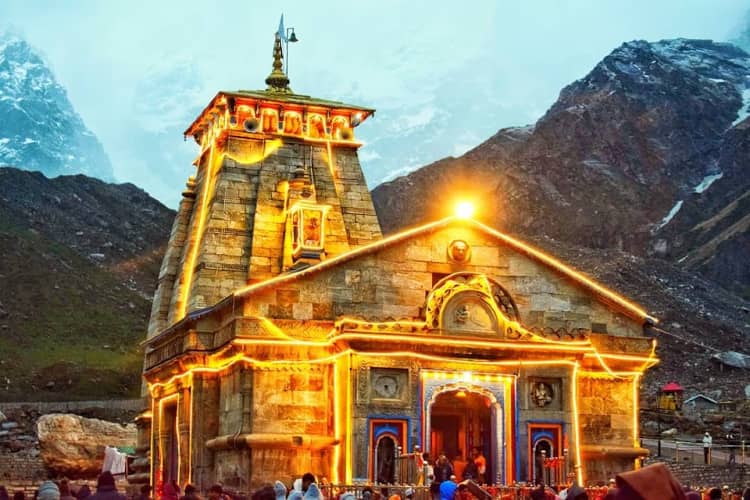 One of the Panch Kedars of the Garhwal Himalayan range and an abode of Lord Shiva, Kedarnath Temple is among the holiest places for Hindus. There are many legends associated with this place and among them, one is very popular. After the battle of Kurukshetra, Pandavas were burdened with the guilt of killing their siblings. So, they were on the lookout for Lord Shiva to apologize for their sins. Although, Lord Shiva eluded them by disguising himself as a bull to roam in the Garhwal Himalayas. When Lord Shiva was discovered by Pandavas, he dived into the ground and Bhima tried to catch him but only got hold of the hump. It is the hump of the Bull that is worshipped at Kedarnath.

It is believed that the Kedarnath Temple was built by Pandavas and the present temple was restored by Adi Shankaracharya in the 8th century AD.

One of the most legendary temples in the country, Badrinath Dham is dedicated to Lord Badri or Lord Vishnu. Besides being a part of a Chota Char Dham circuit of Hindu pilgrimage, the shrine is also included in the Char Dham Yatra along with Dwarka, Puri, and Rameshwaram. Situated in the Chamoli district, the Badrinath Temple houses the idol of Lord Badrinarayan in a meditative posture. In the winter season, the idol is shifted and worshipped at Vasu Dev Temple in Joshimath. Other tourist places nearby the temple are Mata Murti Temple, which is dedicated to Lord Badri’s mother, Tapt Kund, which is a thermal spring and comprises medicinal properties. 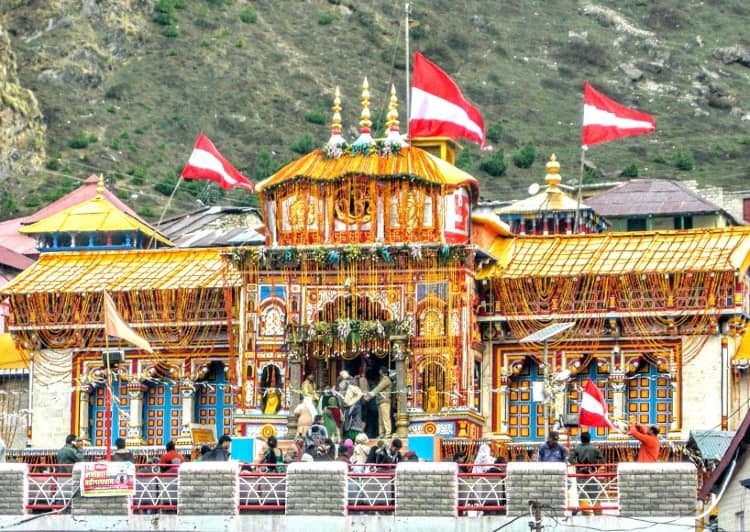 Badrinath Dham is one of the four sacred Dhams and an abode of the incarnation of Lord Vishnu. This is the primary temple among the 5 Badris or Panch Badri. It is also one of the 108 Divya Desams of Lord Vishnu. Badrinath Temple houses 1 meter tall black stone idol of Lord Vishnu, which is believed to be one of eight swayam vyakta kshetras (self-manifested statues).

As per the legend, there were two sons of Dharma, Nar, and Narayan who wished to take shelter in the Himalayas. To set up their hermitage they were searching for the place and during the search, they led to a discovery of four sites of Panch Badri namely Yog Badri, Dhyan Badri, Bridha Badri, and Bhavishya Badri. Lastly, they come across the place that was blessed with the hot and cold springs behind the Alaknanda River. They named this place Badri Vishal and this is how this town got its name.

Originating from the pious river Ganga, Gangotri Dham is situated at 3,415 m above sea level. This pilgrim town is nestled on the bank of the River Bhagirathi. This holy seat of River Ganga is located near Gaumukh and enveloped by the enchanting hills of Garhwal Himalayas. In winters, the temple closes due to the harsh season, and the idol shifts to the Mukhimath Temple in Mukba, which is the winter seat of Goddess Ganga. 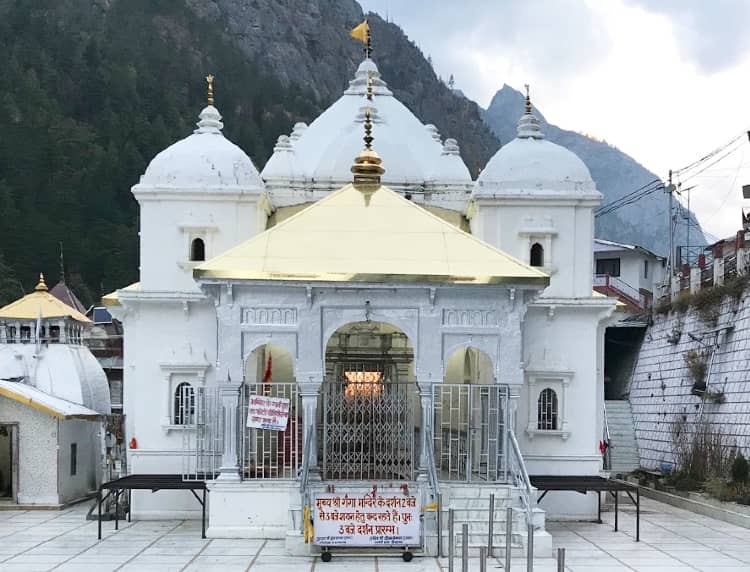 Gangotri Temple holds religious as well as archaeological importance. The temple is said to be around three centuries old. It is a perfect place to find solace and inner peace. One can feel close to the god in the blissful aura of Gangotri. King Bhagirath pray to Lord Shiva to bring Goddess Ganga on earth to dissolve the sins of his forefathers. It is believed that if people immerse the ashes of their departed ancestors in the holy water of River Ganga, they attain salvation. For adventure lovers, the Gaumukh trek is an opportunity to explore the wilderness of this serene region.

Situated at an altitude of 3,293 m above sea level in the Uttarkashi district of Uttarakhand, Yamunotri Dham is dedicated to Goddess Yamuna. This is the second most sacred river in India and originates in Yamunotri. She was the daughter of Lord Sun and the twin sister of Yama (the god of death). 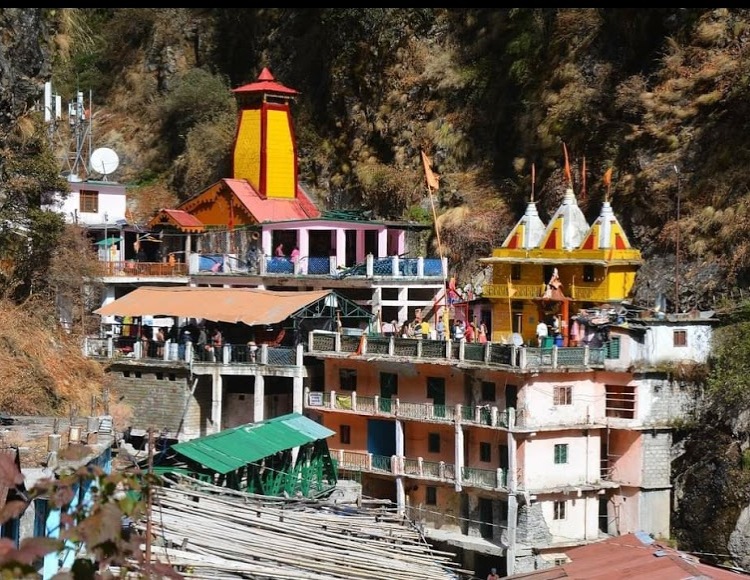 Yamunotri Dham holds a special place in Hindu mythology. It is believed that the bath in the sanctified water of the Yamuna River is said to cleanse all sins and protect the person from an untimely or painful death. To reach the holy abode of Goddess Yamuna, one needs to trek from Janki Chatti. As per the legends, Lord Hanuman came here after burning the Ravan’s Lanka and extinguishing the fire of his tail in the water of Yamuna River at Bandarpoonch. Yamunotri is also famed for glaciers and thermal springs. It is also a paradise for nature lovers. Walking beside the gushing streams offers some spectacular views.

On the way to these four holy shrines, you can visit other tourist places. Every destination has its own importance. Uttarakhand is a haven for nature lovers and adventure fanatics. 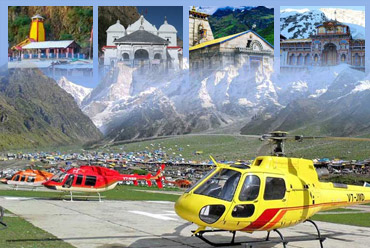 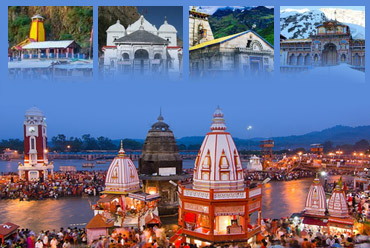 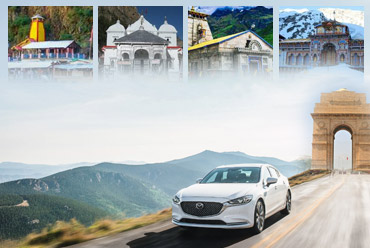 Here is the list of places You Can visit during Char Dham Yatra are:

One of the most sacred Ghats in Haridwar, Har ki Pauri is on the bank of River Ganga. 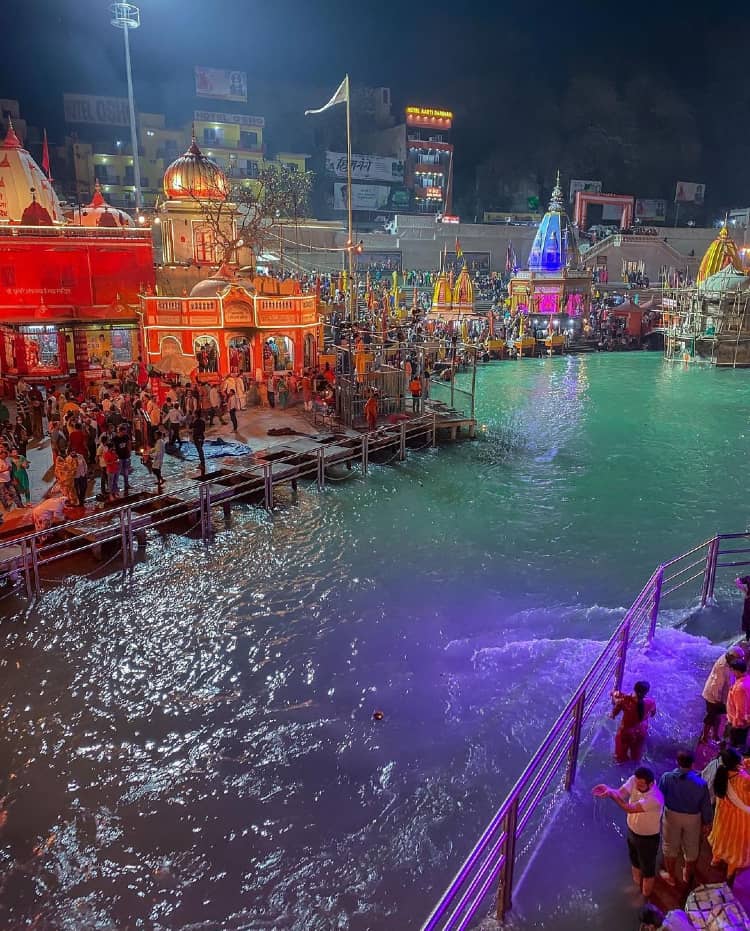 This is a major landmark of this holy city and is literally, ‘Har’ means ‘God’, ‘ki’ means ‘of’, ‘Pauri’ means ‘steps’ – ‘Footsteps of the God’. Pilgrims take a holy dip in the river and attend the world-famous Ganga Aarti here.

Renowned as the ‘Yoga Capital of the World’, Rishikesh is located in the foothills of the Himalayas along the confluence of Chandrabhaga and Ganga Rivers. 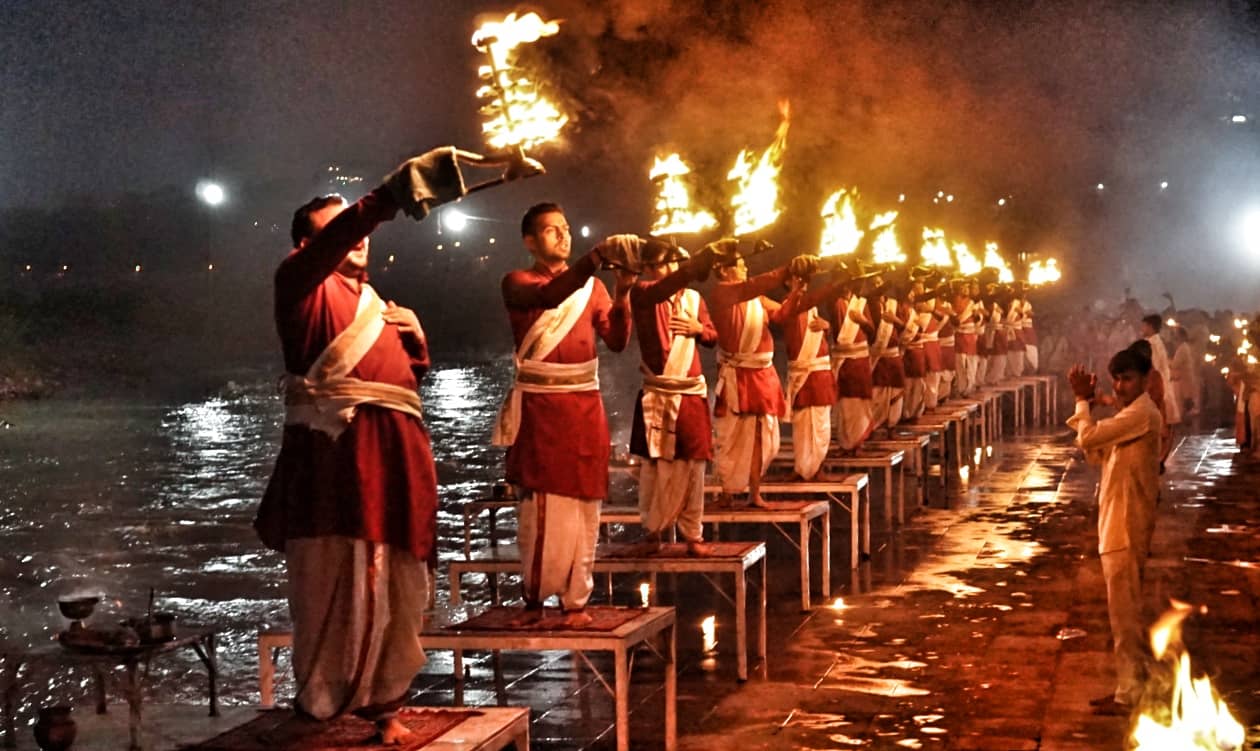 This pilgrimage town is not only a spiritual center but is also equally popular for adventure activities like river rafting, bungee jumping, and camping.

Nestled in the lap of the Himalayas in the Chamoli district of Uttarakhand, Mana is the last Indian village near the Indo-China border. Situated on the bank of River Saraswati, Mana is located at an altitude of 3,219 m above sea level. The traces of Mahabharata can be seen here. It is believed that Pandavas crossed the Mana village during their journey to heaven.

Situated at 9 km from Badrinath, Vasudhara Falls is easily accessible from Mana Village also. This glistening cascade drops from the height of 400 feet and joins River Alaknanda. It is believed to be a place where Sage Ved Vyas divides the Vedas into four – Rig, Sam, Yajur, and Atharv Ved. The unparalleled beauty of the waterfall tempts nature lovers.

Dedicated to Lord Shiva, Madhyameshwar Temple is situated in the Goundar Village of Garhwal Himalayas of Uttarakhand. The trek to the temple started from Ransi Village is 19 km. It is among the Panch Kedar. It is believed that the temple was built by Pandavas. Surrounded by the Chaukhamba peak and lush valleys, Madhyameshwar Temple is accessible in the summer season as the region is covered in snow in winters.

One of the 108 Shakti Peethas in India, Kalimath is located on the bank of Saraswati River in Rudraprayag district. It is believed that after killing the demon Raktbeej, Goddess Kali went underneath the ground here. A silver plate (Sri Yantra) covering a point where Goddess Kali enters the earth is worshipped by the devotees. The Sri Yantra is opened and taken out of the temple only on the eighth day of the Navratri.

Literally means ‘Moon Rock’, Chandrashila is a peak on which Tungnath Temple of Panch Kedar is positioned. The base camp of Chandrashila trek is Chopta. Situated at an elevation of 4,000 m above sea level, Chandrashila offers the enchanting 360-degree view of the majestic Himalayan peaks including Nanda Devi, Trishul, Kedar Peak, Chaukhamba, and Bandarpoonch peaks.

One of the revered pilgrimage sites in the Uttarkashi district, Surya Kund is a mesmerizing waterfall that comes down the mountains and offers spectacular views. Pilgrims visit the waterfall to pay respect to the Sun God.

Located at an elevation of 4,421 m above sea level, Saptrishi Kund is a high-altitude lake. It is the original source of River Yamuna and is fed by the Champasar glacier. The trek to Saptrishi Kund starts from Yamunotri. This place is considered sacred as Sapt Rishi or seven sages named Rishi Kashyap, Atri, Gautama, Vishwamitra, Bhardwaj, Vashishtha, and Jamadagni performed penance here.

Whether it is about the spiritual journey or enjoying the adventure activities, Char Dham Yatra will bring you close to nature and bliss. During the holy sojourn, you can seek blessings from the gods, attend the Aarti, and spend quality time amidst the tranquil nature. Plan a Char Dham Yatra and also explore other tourist places during the trip.