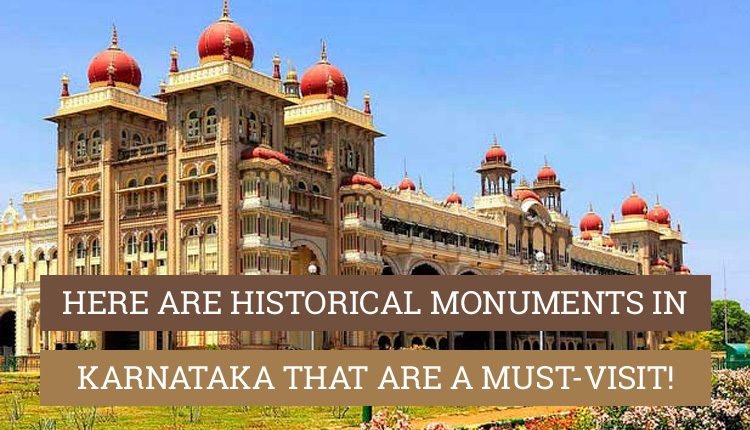 Karnataka has rich historical importance and a glorious past that is reflected through the relics of ancient remains and vestiges of ancient monuments. Historical monuments of Karnataka attract thousands of tourists throughout the year and show that history lives here. It has a unique correlation of heritage and culture that can enchant anyone.

The ancient monuments of Karnataka stand the test of time even after thousands of years with the best class style, inbuilt, sculpture, architecture, technique, and vastness. Karnataka has come second place in India in India for having the highest number of certified landmarks.

The richness of history and heritage that is dotted in monuments of Karnataka can teach you history better than books. It is a hub for majestic architecture, massive palaces, sacred temples, and UNESCO World heritage sites that enjoy royalty and hold the charm. Exploring famous historical places and monuments in Karnataka gives you a chance to live in its centuries-old legacy and gives a plethora of historical secrets that will blow your mind. It comes with no surprise that Karnataka is the best place for history buffs who want to get a sneak peek into history.

List of famous historical places of Karnataka are given below:

This fort has a vibrant base in the well-known city of Belgaum and one of the most popular heritage sites in Karnataka that shows the history of this city. Belgaum Fort has experienced several renovations over the ages under dynastic leaders of the region. This fort has been captured in battles several times and it is counted in the top historical places of Karnataka. It has a notable impression in modern history because Mahatma Gandhi was jailed by the British in this fort while India’s freedom struggle. 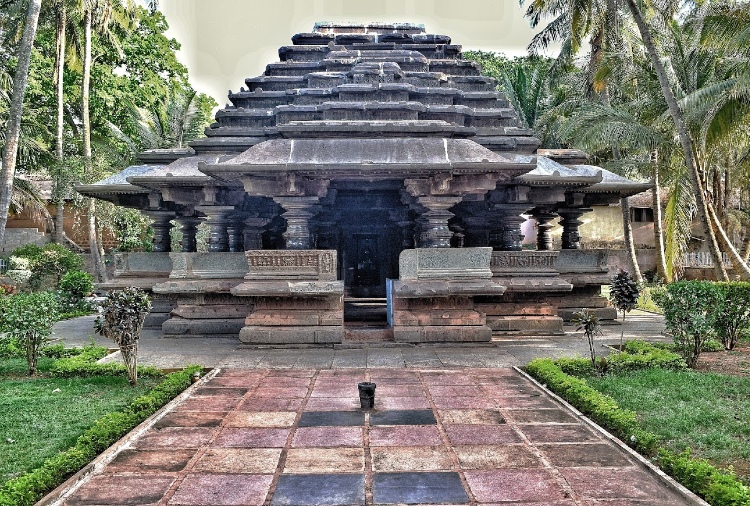 This fort relishes the charm of the foothills of Shaydris coupled with the Markandeya River. The fort is surrounded by a moat and fine ramparts that add a layer of beauty to its architectural design. The eye-catching attractions of this fort include the two temples of Lord Ganapati and Goddess Durga, two Jain Basadis, two mosques, etc. The minars, domes, and arches present a typical fusion of Indo-Saracenic and Deccan styles of architecture that is a delight to observe.

The essence of the magnificent architecture of the Vijayanagara Empire, The Group of Monuments at Hampi, is noted among UNESCO World Heritage sites in India. Hampi is located on the bank south of the Tungabhadra River and is widely known as a historic town that continues to be a famous tourist destination in Karnataka. and once the seat of the Kingdom of Vijayanagara. 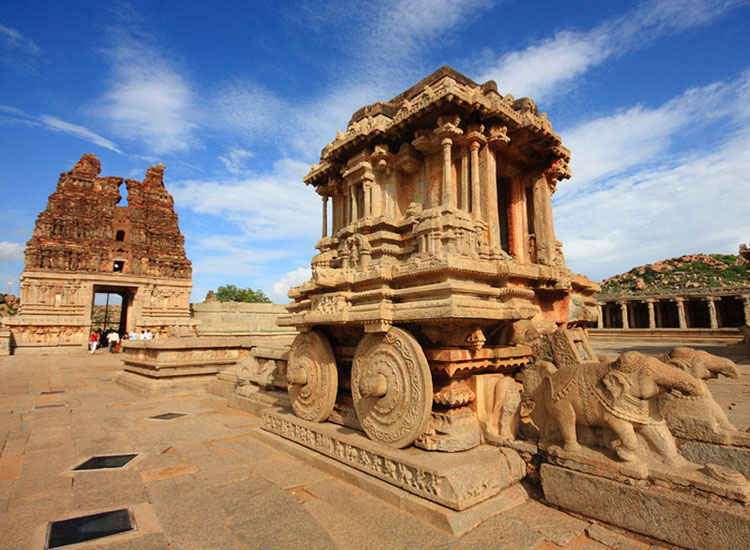 Comprises of ruins that show the unbelievable architecture, sculptures, and stories of the incredible past will amaze you. Hampi holds an important place in the list of historical monuments in Karnataka and gives you countless wow factors. More than 1600 remains of history hidden between the craggy hills and open plains that take you back in history time are the highlight of Hampi.

Gol Gumbaz, also known as Gol Gumbad, is a mausoleum of Muhammad Adil Shah, the Sultan of Bijapur. This tomb is the second largest dome ever built and one of the most-visited monument sites in Karnataka. It reflects the style of Indo-Islamic architecture, and a charm in this monument is the central chamber, where every sound is echoed 7 times. 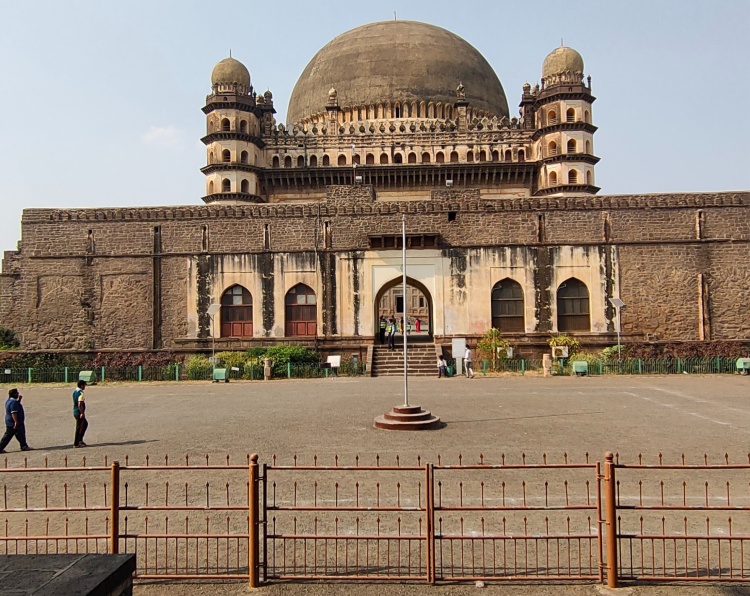 The structure of this monument is related to the Taj Mahal in Agra, which gives it the name ‘the Black Taj Mahal’ due to the dark color of the stone. The chamber inside the mausoleum has an area of 1700 square meters. The splendid work of architecture makes it one of the top historical monuments in Karnataka.

Adil Shah built this majestic fort in the 15th century. This fort is a fine art of red laterite stone and an important historical monument in Karnataka located on the edge of the Bidar Plateau. Legends reveal that this gem of Karnataka has served many ruling families of South India before the Mughals, Nizams, and Sultanates, It has seen the passage of time, rulers, and eras. 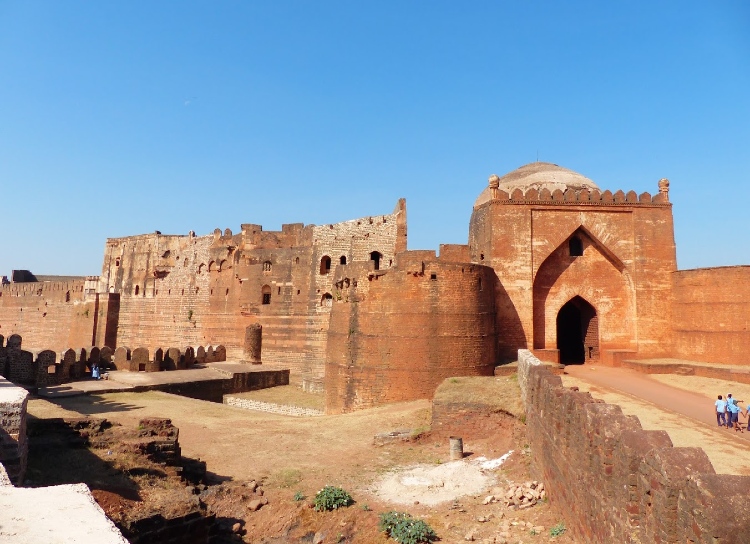 There are many attractions in Bidar that you should check out, like the Royal Pavilion, Tombs of Bahmani Rulers, Tombs of the Barid Shahis, Solah Khamba Masjid, and the Madrassa of Mahmud. A historic water supply system called Karez is considered the best highlight of your tour of this place. Exploring Solah Khamba, Mosque, Rangeen Mahal, Tarkash Mahal, Gagan Mahal, Diwan-e-am, and Diwan-e-Khas gives you insight into the time of royalty.

It is no surprise that a journey that takes you back in history will excite you more than the books of history. With the next famous monument of Karnataka, you can get a blend of spiritual and historical beauty at Hoysaleswara Temple in Halebidu. It is a city that is magnificent in so many ways and holds numerous heritage monuments of Karnataka. 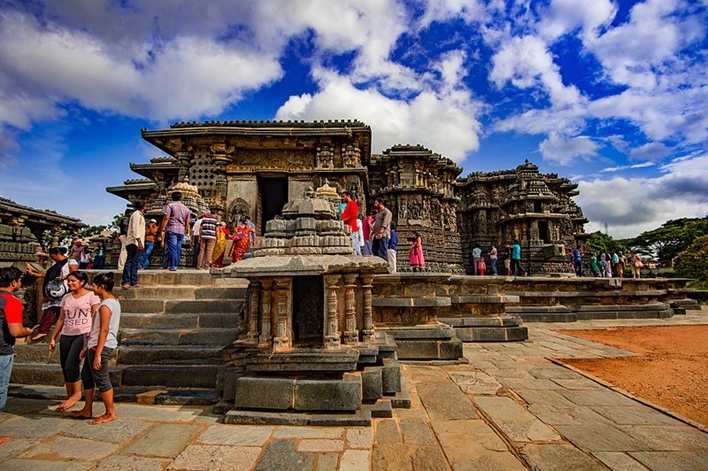 Hoysaleswara Temple is one of the most exceptional examples of Hoysala architecture that attracts tourists from all corners of the country. The temple is praised for having the greatest Indian architecture. An incredible Dravidian temple is dedicated to Lord Shiva and is famous for carvings and arts that bring to life the mythological deities of Indian culture. You will be surprised by looking at the metal-like polishing that makes stones the greatest of treasures. Pay a visit to take blessings from Lord Shiva, but don’t forget to admire the craftsmanship of the temple artisans.

Get a glimpse of arts, crafts, and architecture skills in one place with the popular historical monuments of Karnataka. Badami Cave temples in Badami are some of the most iconic temples you would like to explore. 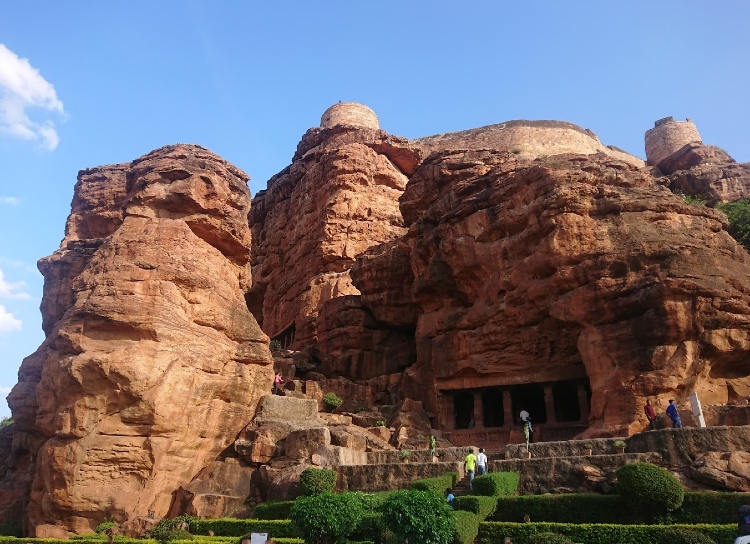 We know that Karnataka has an awe-inspiring history that gives us numerous popular attractions in the form of monuments. Here is one more incredible monument site: a marvelous 57 feet statue of Gomateshwar. It is one of the most admirable and must-visit monuments of Karnataka is also known as Bahubali. 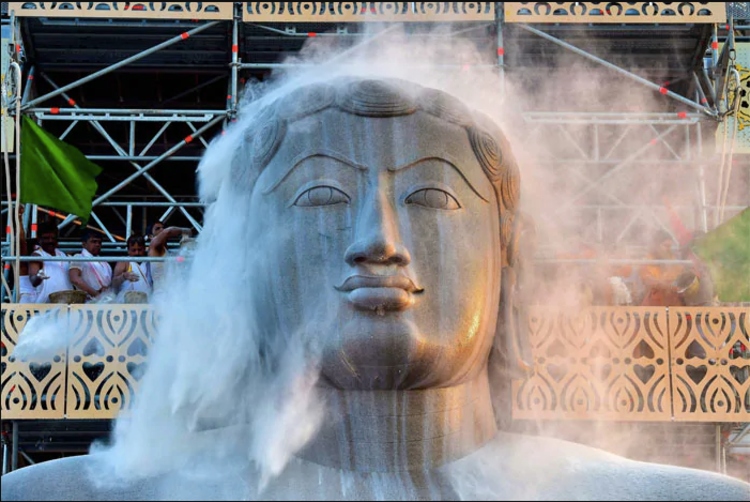 This extensive statue is one of the world’s largest free-standing statues, connected with an awe-inspiring ritual that makes it more charming. The 12 years ritual where the lord is bathed in milk, saffron, turmeric, and other holy things is just mind-blowing. It is one of the best highlights of Karnataka heritage tours.

This Royal Palace is located in Bangalore, and Wodeyar rulers built the beautiful palace in 1944, encouraged by buildings of Normandy and England. This Bangalore Palace is well-known for its majestic wood carvings and tudor-style architecture. This grand palace is one of the most visited monuments in Karnataka that has lost much of its original work but still holds its charm. 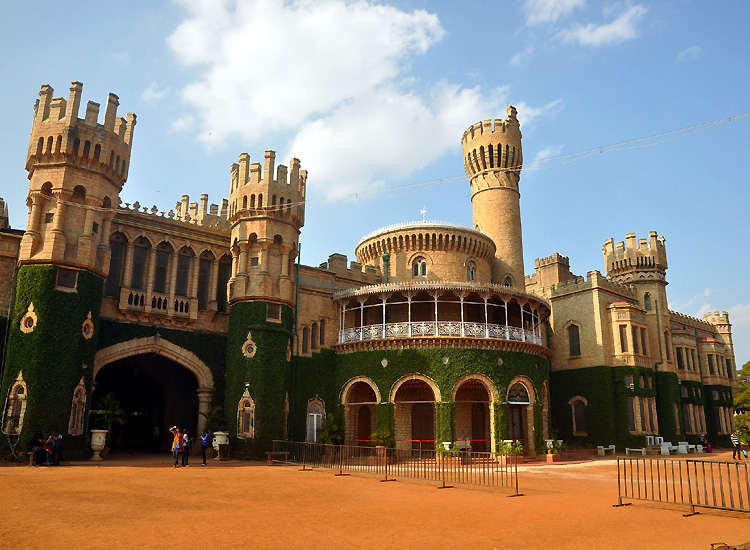 The astounding highlights of this palace are – the fortified towers, extravagant chandeliers, patterned walls, parapets, Roman arches, ornate cornices, hunting trophies, art-deco designs, and more. The eye-catching elements of this palace are the renowned painting of Raja Ravi Verma, an enchanting collection of photographs of the royal family and the growth of Bangalore city.

It is a collection of 12 tombs located at Ashtur, Bidar. The connection of tombs is dedicated to twelve Bahamani Sultans. Every bit of the mausoleum is elegantly carved and engraved. 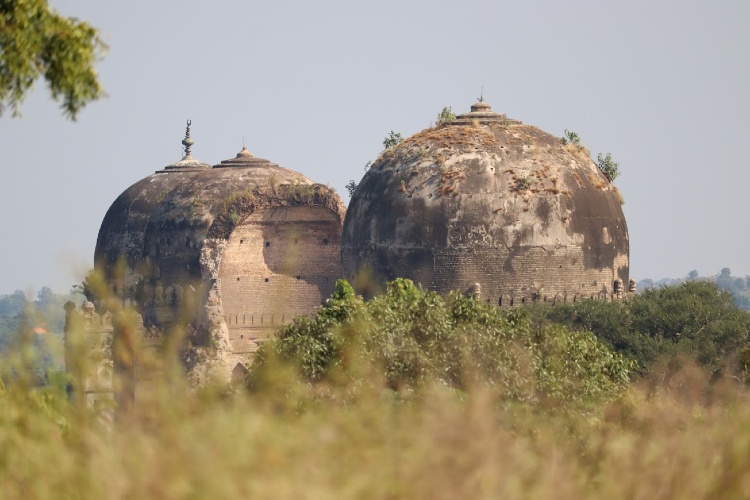 The iconic tomb of Ahmad Shah Wali, the 9th Bahaman ruler, even has an engraving of the Quran. The Swastik symbol on the wall is one of the striking features of the tomb. It is one of the most popular tombs among the Bahamani tombs.

Hassan is one ancient monument in Karnataka that is home to many Hoysala temples. The name of this historical place is derived from the Goddess Hasanamba. The Temple of the goddess is a center of attraction in Hassan, and there are several Jain temples and some churches for touring. There is no dearth of places to visit in Hassan. 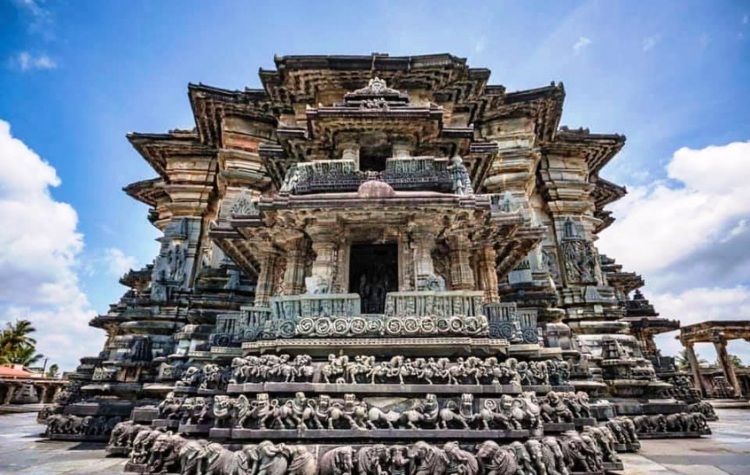 Shri Lakshmi Venkataramana Swamy Temple, Ishvara Temple, The Shettihalli Rosary Church, Bhagawan Bahubali Statue, Amaragiri Malekal Tirupati Temple, and Gorur Dam are some of the must-visit places here. Exploring Hassan in your Karnataka tour gives you a plus point as it is close to Halebidu and Belur, two other sites you must visit.

A storyteller by heart, a content writer by profession, and a traveler enthusiast by soul. Lokesh flows with innovation and creativity, and being with books and exploring new destinations keeps him enthusiastic.