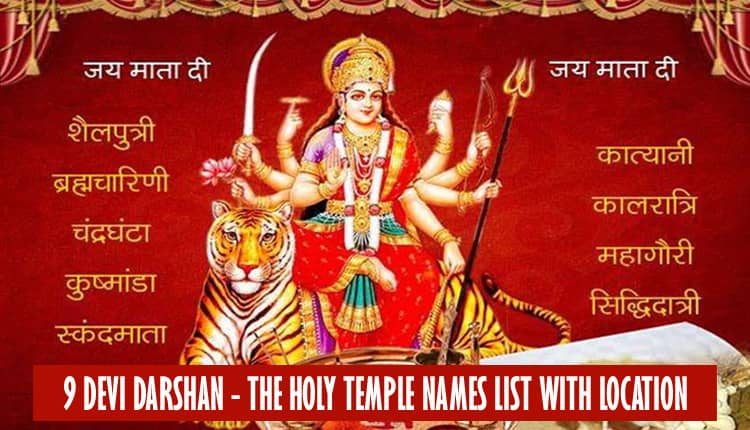 Maa, the Maha Shakti, the Destroyer of Evil. Called by different names but ultimately the ‘Mahadevi’ or ‘Great Goddess’. Most of the people come across the term “Devi Durga” quite a few times while growing up. Durga’s Shakti Peetha is highly revered in the Hindu religion. A Shakti Peetha is a significant shrine where Goddess Durga is worshipped in the form of a Shakti. Now you would ask what a Shakti is? It is the female principle of divine energy, especially when personified as a supreme deity. A Shakti Peetha is the holy abode of Maa Durga. The word ‘Maa’ means a woman with her child or children, also referred to as Bhakt, and ‘Durga’ symbolizes the divine forces – positive energy.

9 (Nau) Highly Revered Temple of Devi Durga in India with their Location:

Get ready to cherish the divine side of the country after knowing the list of Nau (9) Devi temples with the location in India. Delight in a spiritual vibe and enjoy the best holy tour ever. According to Hindu mythology, Goddess Durga is revered in different forms. Here, Nau Durga refers to the nine manifestations of Maa Durga, which holds a pre-eminent position among Hindu devotees. It is believed that visiting and worshiping these nine manifestations of Maa Durga fulfill all the longings of devotees and also make them free from all the sins. Scroll down to know in detail about the 9 holy abodes of Maa Durga.

Maa Vaishno Devi is also known as Mata Rani. An ancient cave temple located in the Trikuta Hills in Katra, Jammu & Kashmir. This temple is an enchanting site for sojourners. The Vaishno Devi temple is one of the most revered Hindu temples, which is devoted to Shakti, a manifestation of the Mother Goddess. 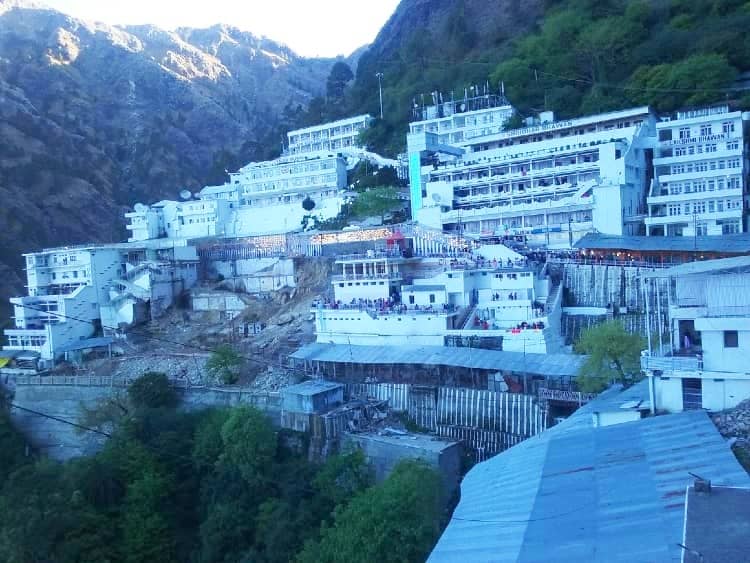 Maa Vaishno Devi is the second most visited shrine in India after the Tirupati Temple. To reach the temple devotees have to climb from Katra to Vaishno Devi on a 12 km long well-paved road. The helicopter services are also available, which regularly ply from Katra to Sanji Chhat. Undoubtedly it is one of the famous temples in Jammu. The main temple is located at an altitude of about 5200 feet above sea level.

Nestled beautifully on the banks of the Alaknanda river in the Garhwal region of Uttarakhand. Maa Dhari Devi temple is one of the heavenly abodes of 108 shakthi sthals in India and the temple is dedicated to the goddess Kali. 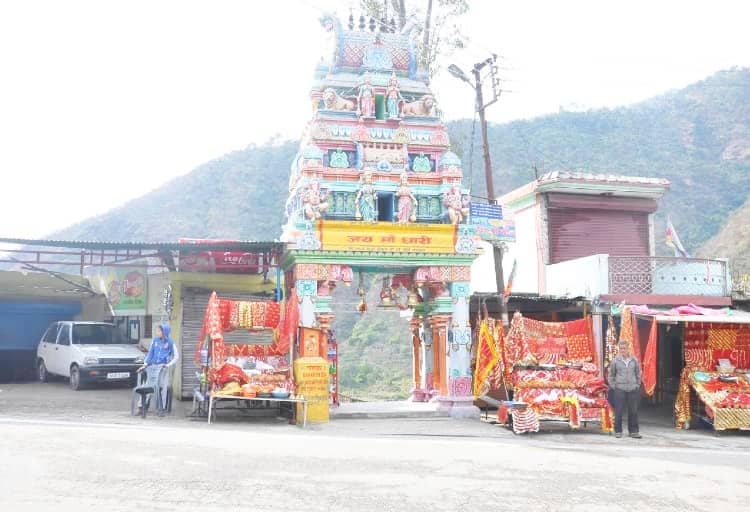 Devotes believe the idol of the mother present in this temple changes its form thrice a day. The idol looks like a girl in the morning, then a young woman in the afternoon, and an old woman in the evening. This belief makes Dhari Devi Temple one of the mysterious temples of India. Maa Dhari Devi temple shares a location close to Srinagar and Rudraprayag, which is one of the five Prayag in India.

According to Hindu mythology, to save the universe and bring back Shiva’s sanity, Lord Vishnu cut Sati’s lifeless body into 51 pieces using his Sudharshan Chakra. And among the 51 pieces, one of the eyes of Maa Sati fell, where now the shrine of Naina Devi Ji is built. The temple was built by Raja Bir Chand in the 8th century in the name of Naina Devi. 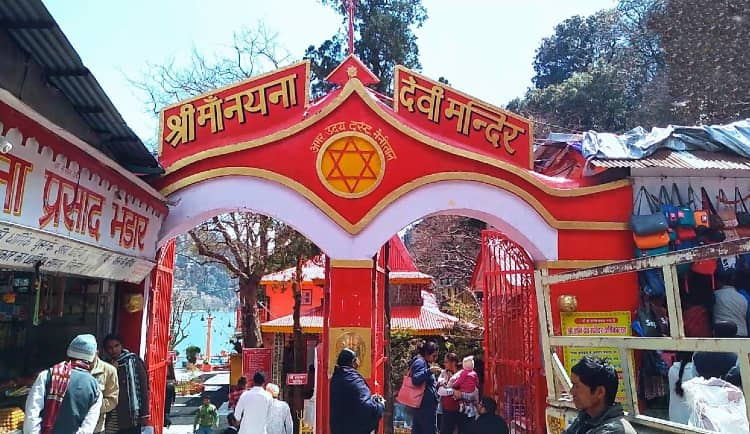 The temple is considered to be one of the important temples located in Bilaspur, Himachal Pradesh, and is also highly revered among the Hindus. Maa Naina Devi Ji temple is perched on a wonderful hill, named Naina Devi hill from where one can enjoy the striking views of the Gobind Sagar lake. One can also enjoy a cable car ride to reach the temple top.

Among the 51 Shakti Peethas in India Jwala Devi Temple is one among them. Peacefully located in the lower Himalayan range in the Jawalamukhi town of Kangra district of Himachal Pradesh. Jwala Ji temple is one of the most ancient temples in India. Lord Vishnu cut Maa Durga (Sati) into 51 pieces and her tongue fell here and this is the exact place where the shrine of Jwala Devi Ji was built. 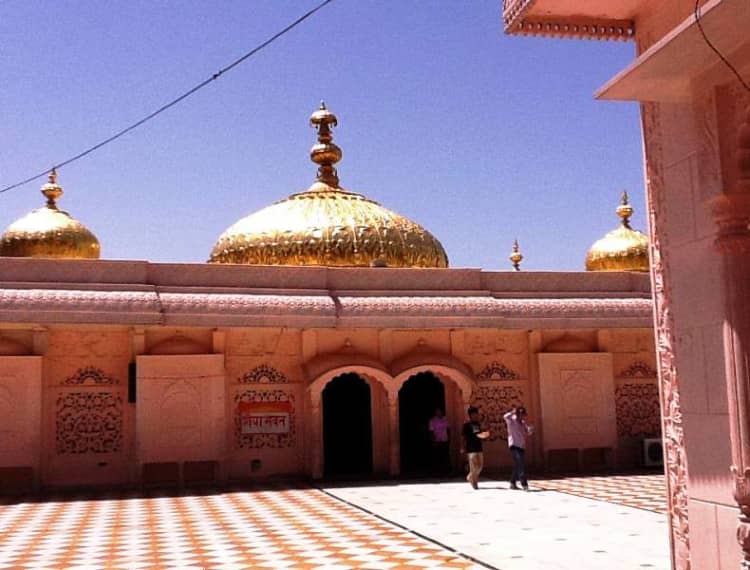 As per the belief of the locals, a shepherd first saw an eternal flame on top of the hill and narrated the scene to the king. After listing the shepherd’s narrative the king went and saw Goddess Jwala Devi and he decided to build a temple. It is believed that if anyone sincerely visits this temple, Maa Jawala fulfills all the wishes made by a devotee.

This is one of the most well-known temples which is popular for its large number of devotees that flock around every year to soak in spirituality. Beautifully placed in the small village of Himachal Pradesh – Dharamshala Manhattan, the temple is dedicated to the Goddess Durga. 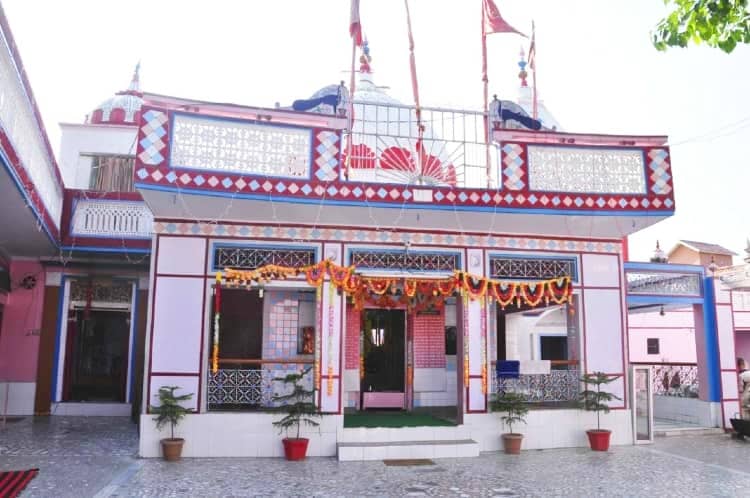 It is believed that Maa Sheetla quickly fulfills a wish made with a pure heart and also vanishes all the stress and worries. It is one of the famous temples located in Himachal Pradesh.

This temple is located in the Kangra district of Himachal Pradesh. Visit the temple to pay reverence to the Goddess Chamunda Devi. There are several mythological stories linked to this temple that make it so special. Chamunda Devi is revered as a mother goddess in Himachal and thus holds immense value in the state. The temple shares a location close to one of the beautiful hill stations in Himachal Pradesh, Dharamsala, which is located about 15 km away from the temple. 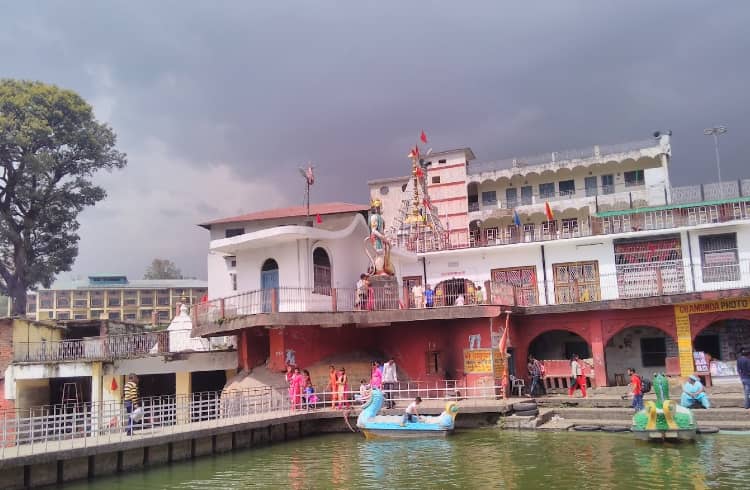 The beautiful holy shrine of Devi Chintpurni, which is a form of Maa Durga, is located in the Una district of Himachal Pradesh. It is a beautiful temple located amidst the great Himalayas and Shivalik hills. Chintpurni Devi Temple is considered to be one of the holiest shrines in India. It is believed that if prayer is done with a sincere heart, Mata Chintpurni fulfills all the wishes quickly and melts all the worries and stress of life. 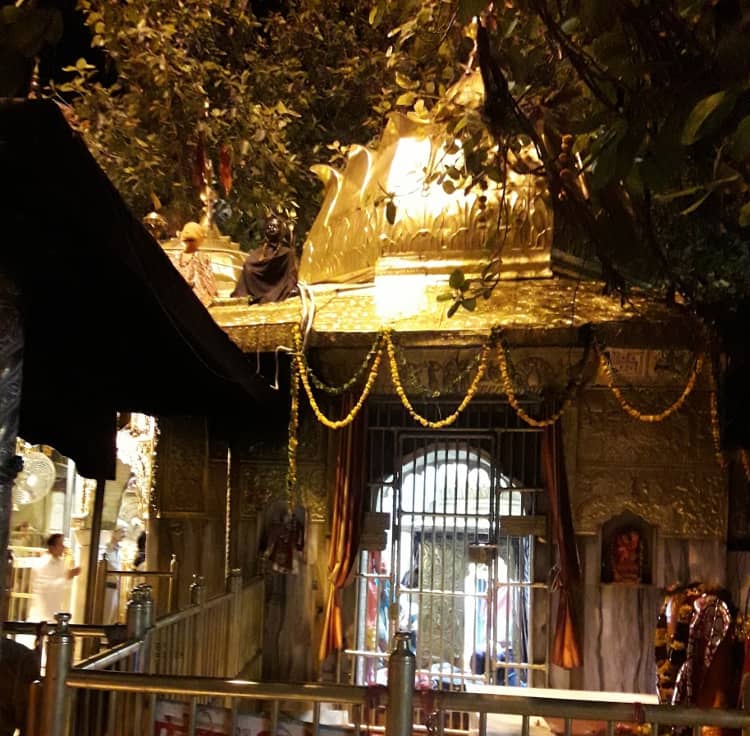 The temple is renowned as one of the 7 majors of a total of 51 Shakti Peethas. Surrounded by beautiful nature and hills, this place is your go-to place for religious renewal.

The Bajreshwari Devi Temple is a popular Hindu pilgrimage site, which is located in the Kangra District of Himachal Pradesh. According to Hindu mythology, it is believed that the temple was built by Goddess Bajreshwari. 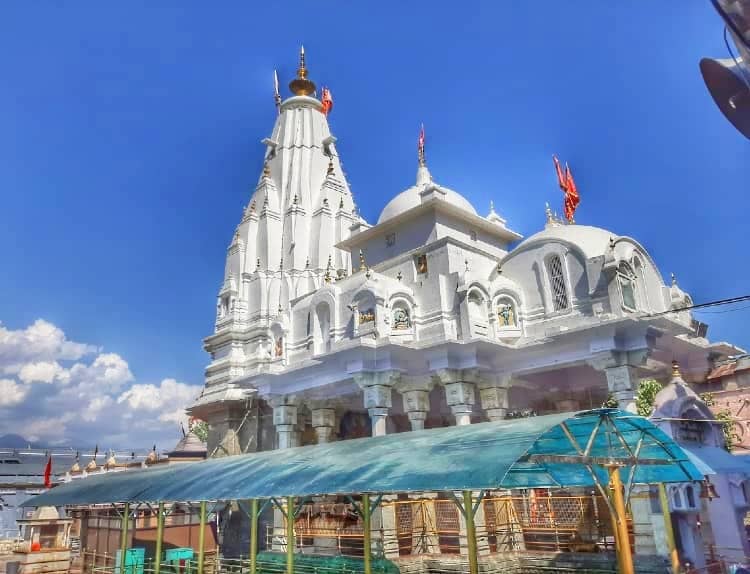 The temple is at the place where once the famous Ashwamedh, also called horse-sacrifice took place. It is the place where the left breast of Sati fell thus making it a Shakti Peetha. Devotees from every corner of the world visit here to seek the blessing of Maa Brajeshwari. The Vajreshwari Mata or Brajeshwari Devi temple is also known as Kangra Devi Mandir.

Mata Mansa Devi Mandir is located near Majra, a small village in Haryana. The temple is dedicated to Maa Mansa, and the shrine is highly revered by Hindu devotees. There is a tree at the temple premises and is believed divine, it is believed that tying a thread around the tree fulfills all the wishes of devotees. 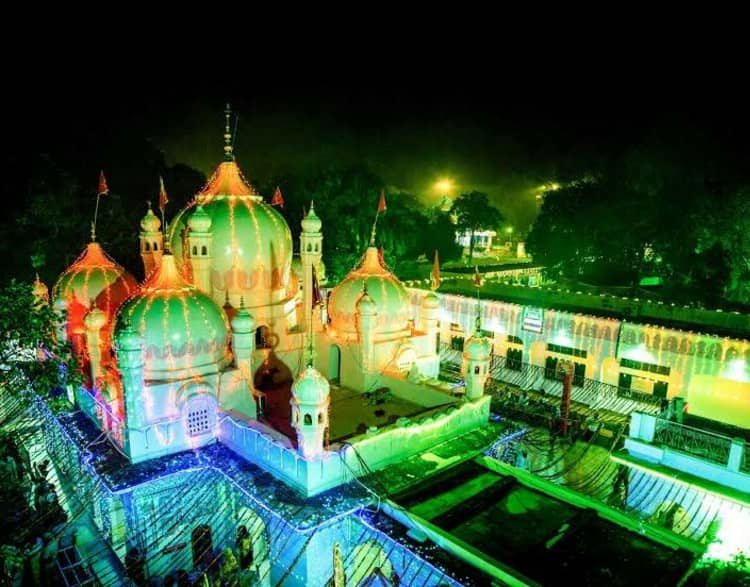 The temple of Maa Mansa Devi, which is located in Panchkula is a representation of Himalayan culture and belief. The shrine located on the foothills of Shivalik is the abstract of the age-old legend of ‘Shakti’ worship in Northern India. Himalaya being the abode of Shiva and his consort ‘shakti’ became the center of Shakti worship. In the proximity of Panchkula, there are several Shakti worshipping centers identified by their names such as Chandi, Kalika, and Bhima.

If you have been planning to head on a pilgrimage tour, then it is the right time to visit and seek the blessings of Maa Durga, the ultimate power. Pay a visit to the holy abode of Maa Durga located in various locations, mostly in Himachal Pradesh, and get the divine experience of the journey that will leave you amazed! Head out for the 9 Devi Darshan and experience serenity and spirituality at its best.

Anand is a content writer and developer, with 2+ years of experience in creating content for several industries. His zeal for helping the readers and providing authentic information arises from his former experience in journalism. Exploring new places, learning new things, trying out amazing cuisines, and blogging about them are few things that keep Anand fascinated.